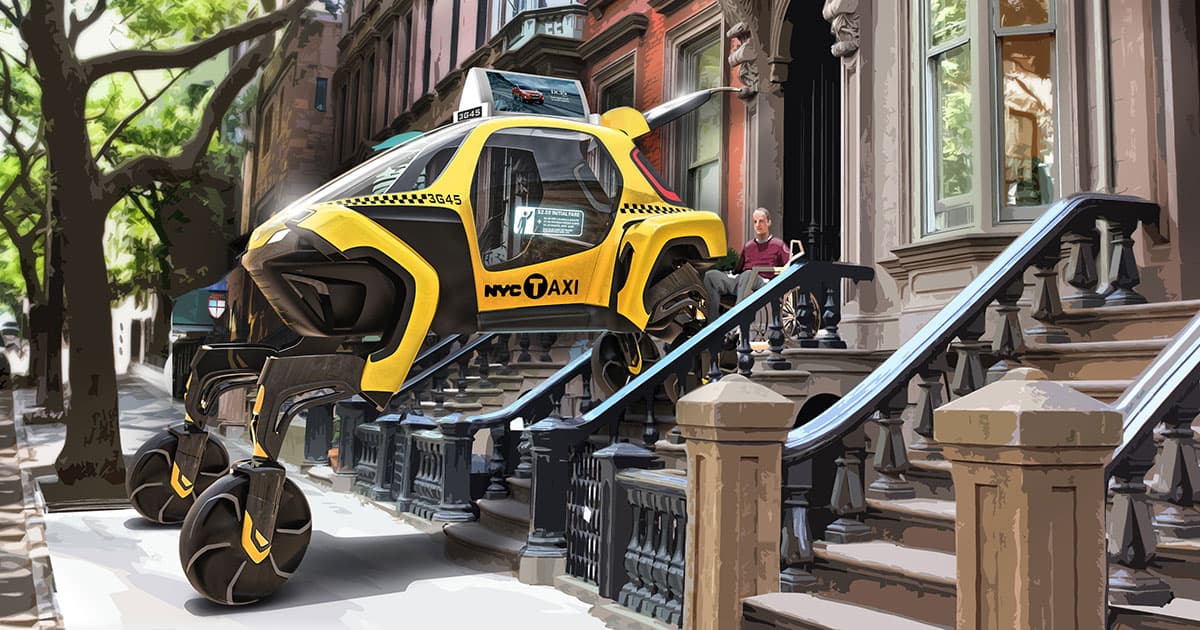 On Wednesday, Hyundai released a teaser image of Elevate, an electric vehicle with four robotic legs designed to allow the car to walk or climb over rough terrain.

The company promised to reveal a design concept and prototype of the walking car on Monday at CES 2019, and it delivered — albeit on a small scale.

During a press conference at the annual electronics convention, Hyundai shared a video in which a CGI version of an Elevate climbs over rocks and rubble, looking all kinds of badass.

It also revealed a decidedly less badass 1:8 scale model of an Elevate — no doubt disappointing those hoping to see a full-scale version of the vehicle crawl across the stage.

Still, the video showcasing the tiny robotic car's capabilities is impressive. The robot crawls along the floor on its four legs and even climbs (slowly) onto a platform — all while the body of the vehicle remains fairly level.

Hyundai might not have a drivable Elevate, but it certainly has plenty of ideas for how one might be useful.

As anticipated from the initial concept image, the company believes Elevate could be a boon in emergency situations.

"When a tsunami or earthquake hits, current rescue vehicles can only deliver first responders to the edge of the debris field. They have to go the rest of the way by foot," John Suh, Hyundai vice president, said in a news release. "Elevate can drive to the scene and climb right over flood debris or crumbled concrete."

"This technology goes well beyond emergency situations," Suh said. "People living with disabilities worldwide that don’t have access to an ADA ramp could hail an autonomous Hyundai Elevate that could walk up to their front door, level itself, and allow their wheelchair to roll right in — the possibilities are limitless."

Netflix and Drive
Mercedes Claims to Have Achieved Level 3 Automation, Beating Tesla
Yesterday
Read More
Absent CEO
Tesla Investors Furious at Elon Musk for Vanishing During Crisis to Play With Shiny New Twitter
12. 13. 22
Read More
Stay Away
Tesla Is Having Extreme Trouble Hiring, for Some Reason
12. 6. 22
Read More
+Social+Newsletter
TopicsAbout UsContact Us
Copyright ©, Camden Media Inc All Rights Reserved. See our User Agreement, Privacy Policy and Data Use Policy. The material on this site may not be reproduced, distributed, transmitted, cached or otherwise used, except with prior written permission of Futurism. Articles may contain affiliate links which enable us to share in the revenue of any purchases made.
Fonts by Typekit and Monotype.