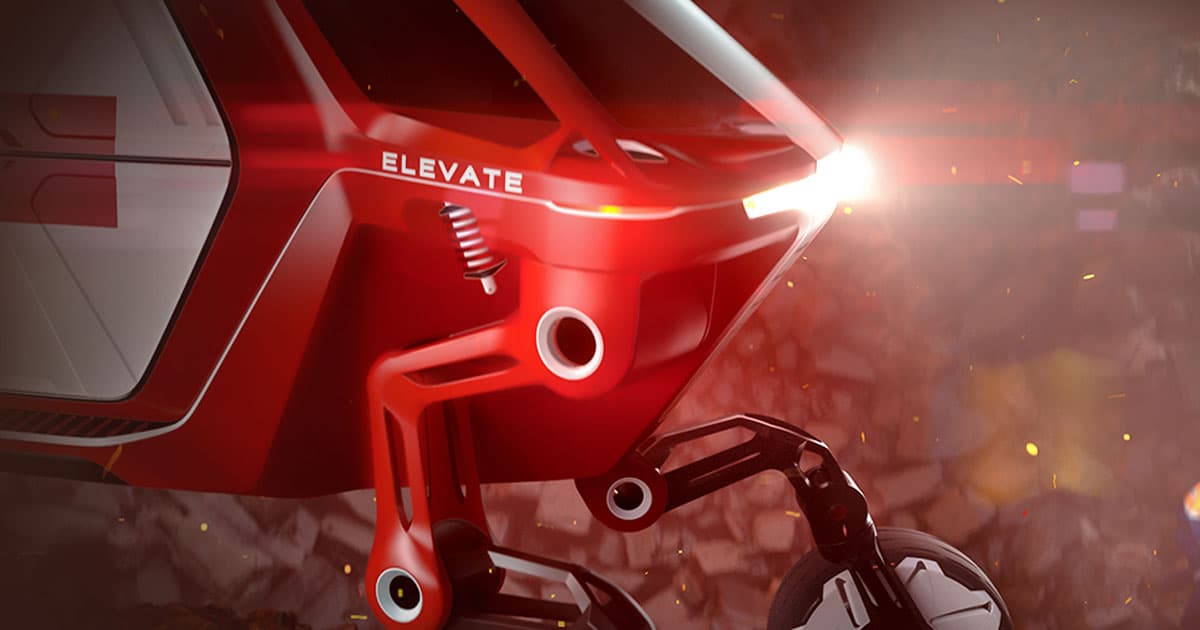 Elevate will "take people where no vehicle has been before."

Elevate will "take people where no vehicle has been before."

Hyundai's CES 2019 press conference on Monday might just end up being standing-room only.

During the event, the South Korean automaker will reveal more information about Elevate, a walking car — and it just might represent an entirely new category of vehicles.

Hyundai teased Elevate with a short news release and image on Wednesday morning.

All we can glean from those is that Elevate is an electric vehicle with four robotic legs, each of which has a wheel where a foot would normally be — not entirely unlike the nightmare-inducing Wheelers from "Return to Oz."

The legs appear to have at least three joints each. Those are presumably what allow the vehicle to "drive, walk, or even climb over the most treacherous terrain," as stated in the press release.

Hyundai is calling Elevate the world's first Ultimate Mobility Vehicle (UMV), which it says will "take people where no vehicle has been before."

As for who those people might be, the giant red cross on the side of the walking car could indicate potential use as a rescue vehicle following a disaster. That would make sense given that the car is navigating across rubble in the press image. After all, it doesn't exactly seem like something you'd use for trips to the grocery store.

We'll have to wait until Monday's showcase of the Elevate prototype to find out any other plans Hyundai has for the vehicle. But if Elevate is as impressive as it appears in the released image, the vehicle might be the first UMV — but it probably won't be the last.

More on rescue vehicles: A Six-Foot Tall Humanoid Robot Could Come to Your Rescue During a Disaster

NASA's Mars Rover Concept Looks Like the Batmobile
5. 12. 17
Read More
CHON: Legacy
James Webb Discovers Coldest Ice in Known Universe, Harboring Molecules Essential For Life
Yesterday
Read More
Not a Scientist, Just Three Chatbots in a Trench Coat
Largest Publisher of Scientific Journals Slaps Down on Scientists Listing ChatGPT as Coauthor
Yesterday
Read More
+Social+Newsletter
TopicsAbout UsContact Us
Copyright ©, Camden Media Inc All Rights Reserved. See our User Agreement, Privacy Policy and Data Use Policy. The material on this site may not be reproduced, distributed, transmitted, cached or otherwise used, except with prior written permission of Futurism. Articles may contain affiliate links which enable us to share in the revenue of any purchases made.
Fonts by Typekit and Monotype.