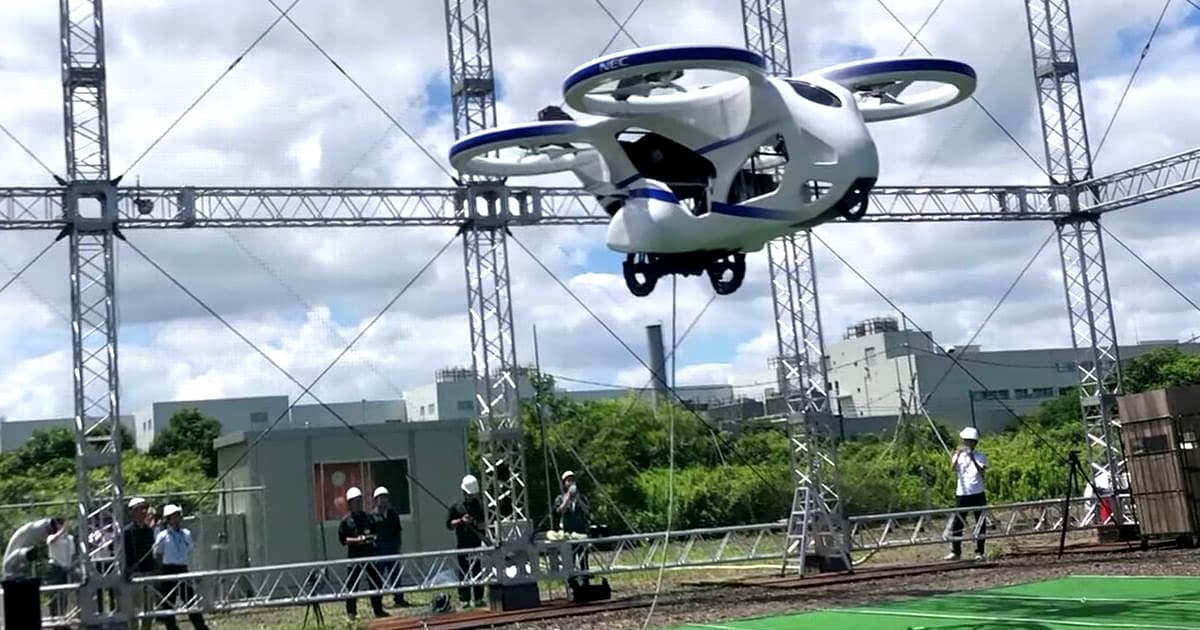 There's a reason the car is in a massive cage.

There's a reason the car is in a massive cage.

On Monday, Japanese electronics maker NEC Corp demonstrated its flying car by hovering it 10 feet off the ground for a full minute — putting Japan one step closer to its goal of being the world leader in flying vehicles.

“Japan is a densely populated country and that means flying cars could greatly alleviate the burden on road traffic," Kouji Okada, a project leader at NEC, told Bloomberg. “We are positioning ourselves as an enabler for air mobility, providing location data and building communications infrastructure for flying cars.”

NEC spent about a year developing the battery-powered flying car alongside Japanese startup Cartivator, which plans to begin mass producing the vehicle in 2026.

During Monday's demonstration, the pair of developers enclosed the car in a large cage to ensure it wouldn't hurt anyone if it decided to go rogue. Thankfully, everything went as hoped, with the 330-pound vehicle using its four propellers to lift off the ground without incident.

The pair will now focus on working out the remaining kinks with the vehicle — but at least they know one thing for sure: the flying car can indeed fly.

READ MORE: New Japanese Flying Car Gets Off the Ground, for About a Minute [Bloomberg]

More on flying cars: Japan Wants to Be the First Place Where Flying Cars Are Standard Because of Course

New Zealand May Soon Get a Flying Taxi Service
3. 16. 18
Read More
PAL-V's Flying Car Design Has Been Finalized, Will Arrive in 2019
3. 6. 18
Read More
AirSpaceX's Autonomous Electric Flying Taxi Will Hit the Skies in 2026
1. 26. 18
Read More
+Social+Newsletter
TopicsAbout UsContact Us
Copyright ©, Camden Media Inc All Rights Reserved. See our User Agreement, Privacy Policy and Data Use Policy. The material on this site may not be reproduced, distributed, transmitted, cached or otherwise used, except with prior written permission of Futurism. Articles may contain affiliate links which enable us to share in the revenue of any purchases made.
Fonts by Typekit and Monotype.