Riders have no choice but to trust the Vizzion's AI. 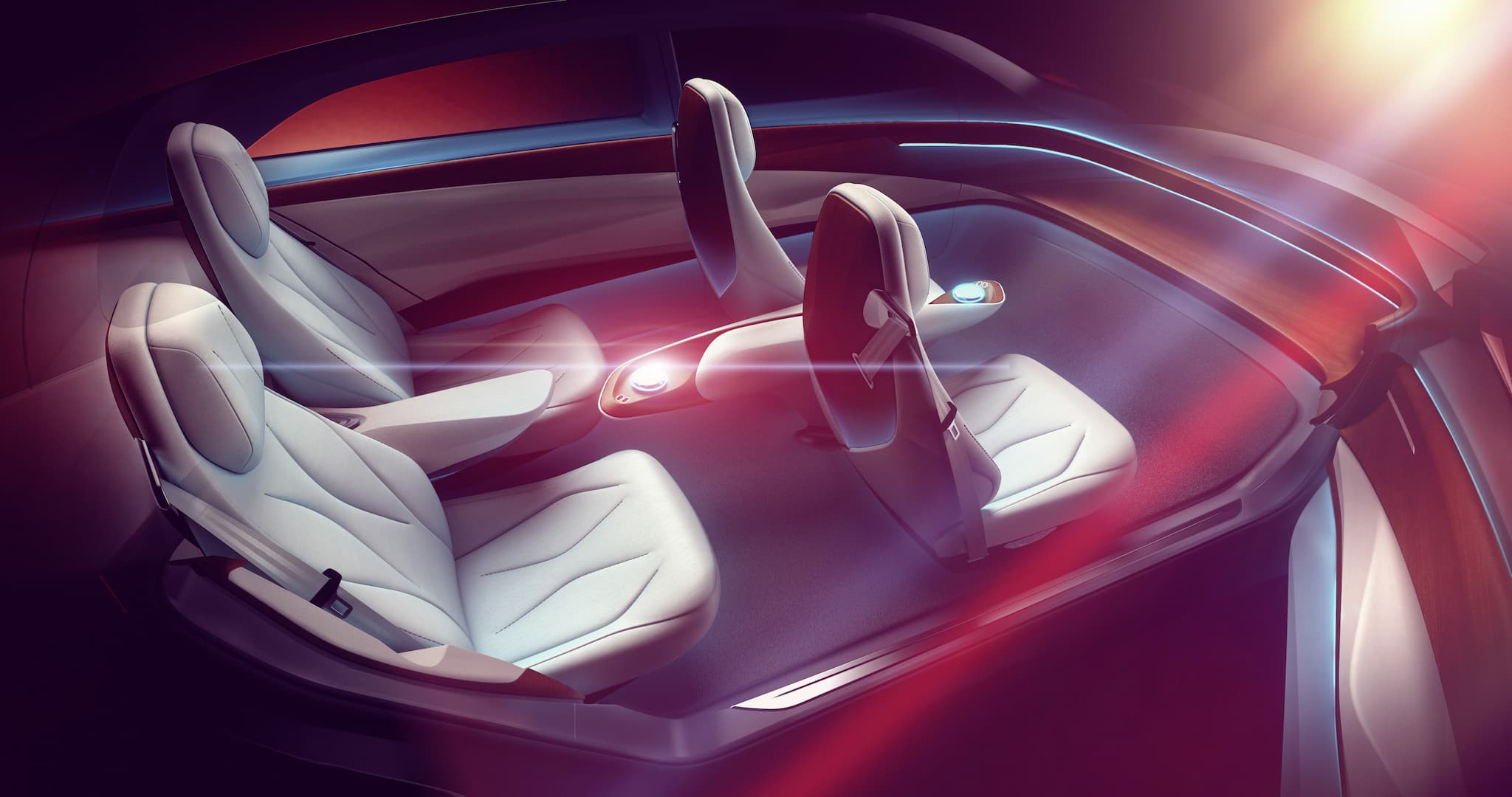 The annual Geneva Motor Show is still a couple of weeks away, but Volkswagen is already building buzz for the fourth car in their futuristic I.D. concept series: the Vizzion.

The I.D. Vizzion is an all-electric sedan featuring twin electric motors and a top speed of 180 kilometers per hour (112 mph). According to VW, the vehicle's 111kWh lithium-ion battery pack gives it the ability to travel 665 kilometers (413 miles) on a single charge when braking regeneration is factored in.

More exciting than what's under the Vizzion's hood, however, is what's in the car's cabin — or, more accurately, what's not in it: a steering wheel, pedals, or visible controls.

The Vizzion is Volkswagen I.D.'s first concept of a fully autonomous vehicle. A "digital chauffeur" handles the driving, while a "virtual host" communicates with passengers via voice and gesture control. According to VW, the host knows each passenger's preferences and adjusts the ride accordingly.

The transition toward autonomous cars seems largely inevitable. The technology is advancing rapidly, and once we perfect it, autonomous systems are expected to save lives while also giving former drivers extra free time during their commute.

VW seems aware of this trend as each of the three previously unveiled I.D. concept models — the I.D., the I.D. Crozz, and the I.D. Buzz — featured some level of autonomous driving capabilities. However, a human driver still had the option to take the wheel if they so desired. By removing the Vizzion's wheel entirely, VW removes that option.

With fully autonomous driving technology itself still largely in the concept stage, VW could simply be trying to gauge how the public would react to a car that forced them to give up control entirely. After all, concept cars are just that — concepts — and the Vizzion could change dramatically by the time it hits the road, if it ever hits the road.

Read This Next
LIDARally
Volvo's New Electric Car Won't Drive if It Detects That You're Drunk
Charged Up
Startup Says Amazing New Battery Lets EVs Drive 400 Miles, Recharge in 15 Minutes
Shots Fired
Ford CEO Mocks Tesla For Rolling Out Half-Finished Autonomous Driving
Poor Comms Team
Volkswagen Says It Lied to Reporters About Name Change
Weather Advisory
It's So Cold, Even Teslas Are Freezing Shut
More on Advanced Transport
Kapow
Feb 3 on the byte
Self-Driving Car Plowed Into Active Fire Scene, Forcing Firefighters to Smash Its Window
Netflix and Drive
Jan 30 on futurism
Mercedes Claims to Have Achieved Level 3 Automation, Beating Tesla
Battery Trouble
Jan 30 on the byte
Tesla "Spontaneously" Bursts Into Flames While Driving Down Freeway
READ MORE STORIES ABOUT / Advanced Transport
Keep up.
Subscribe to our daily newsletter to keep in touch with the subjects shaping our future.
+Social+Newsletter
TopicsAbout UsContact Us
Copyright ©, Camden Media Inc All Rights Reserved. See our User Agreement, Privacy Policy and Data Use Policy. The material on this site may not be reproduced, distributed, transmitted, cached or otherwise used, except with prior written permission of Futurism. Articles may contain affiliate links which enable us to share in the revenue of any purchases made.
Fonts by Typekit and Monotype.