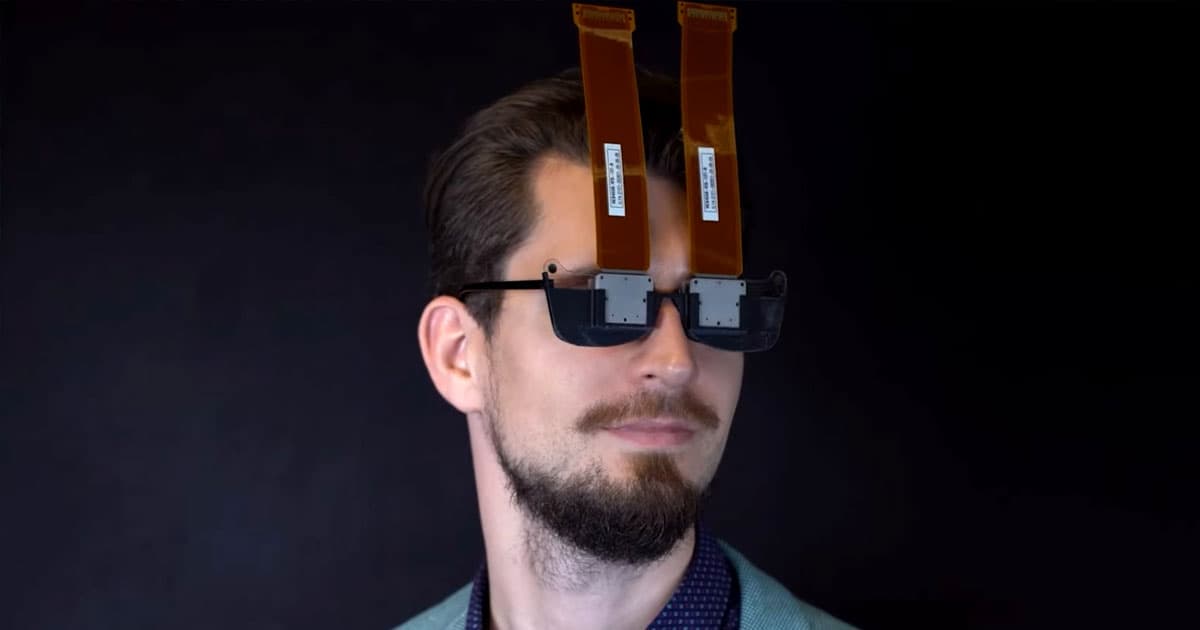 In the virtual reality industry's quest to provide users with a truly immersive experience, one very clunky obstacle has stood in their way: the headsets themselves.

The current VR goggles on the market are notoriously large, awkward, and really just cumbersome.

But according to PC Gamer, it looks like a group of researchers may have come up with a brilliant solution. They developed a VR headset that actually resembles normal eyeglasses — and not, you know, oversized scuba goggles.

The "Holographic Glasses" are a collaborative effort between Stanford University researchers and AI developer NVIDIA. They don't exactly look like a pair of glasses just yet — the lenses are quite thick, and the headset also features two bizarre-looking holographic ribbons, one stuck to each lens, that extend upwards like a pair of antennae.

But if they work even remotely as well as the team claims they do in a new paper — which hasn't been peer reviewed yet — these glasses could be a major stride towards the wholly immersive VR technology that the likes of Meta CEO Mark Zuckerberg have been dreaming of.

According to the paper, these "Holographic Glasses" were created using "pancake" lenses, a complex optics system that allows for a shorter distance between the VR-compatible screen and headset lenses.

While pancake lenses aren't a new concept, they've only been able to deliver two-dimensional images — which isn't exactly immersive.

In a major departure from previous pancakes prototypes, the researchers claim their reworked "flapjack" optics can deliver "full-color 3D holographic images," as well as an impressive 200-degree field view — and, of course, a smaller profile overall.

While these goggles have yet to hit the market — or be tested outside of a lab, for that matter — this looks like some pretty promising research.

And we know that there's probably at least one major player out there who's got his watchful eye on grabbing a pair — we're looking at you, Zuckerberg. Hell, he might just buy the whole company.

More on virtual reality: This Therapeutic Vr Experience Is Just like Tripping on Acid

Oh, Good
Oculus Founder Builds VR Headset That Kills User If They Die in Game
11. 7. 22
Read More
TV for Your Face
Elon Musk Says the Metaverse Sucks and Neuralink Will Be Better
12. 22. 21
Read More
Breakthrough Technologies
Facebook Hardware Devs Reportedly Skeptical of Metaverse
10. 28. 21
Read More
+Social+Newsletter
TopicsAbout UsContact Us
Copyright ©, Camden Media Inc All Rights Reserved. See our User Agreement, Privacy Policy and Data Use Policy. The material on this site may not be reproduced, distributed, transmitted, cached or otherwise used, except with prior written permission of Futurism. Articles may contain affiliate links which enable us to share in the revenue of any purchases made.
Fonts by Typekit and Monotype.