Mark Zuckerberg Says That When Employees Call Him the "Eye of Sauron," It's Actually a Compliment

He says it's a compliment. 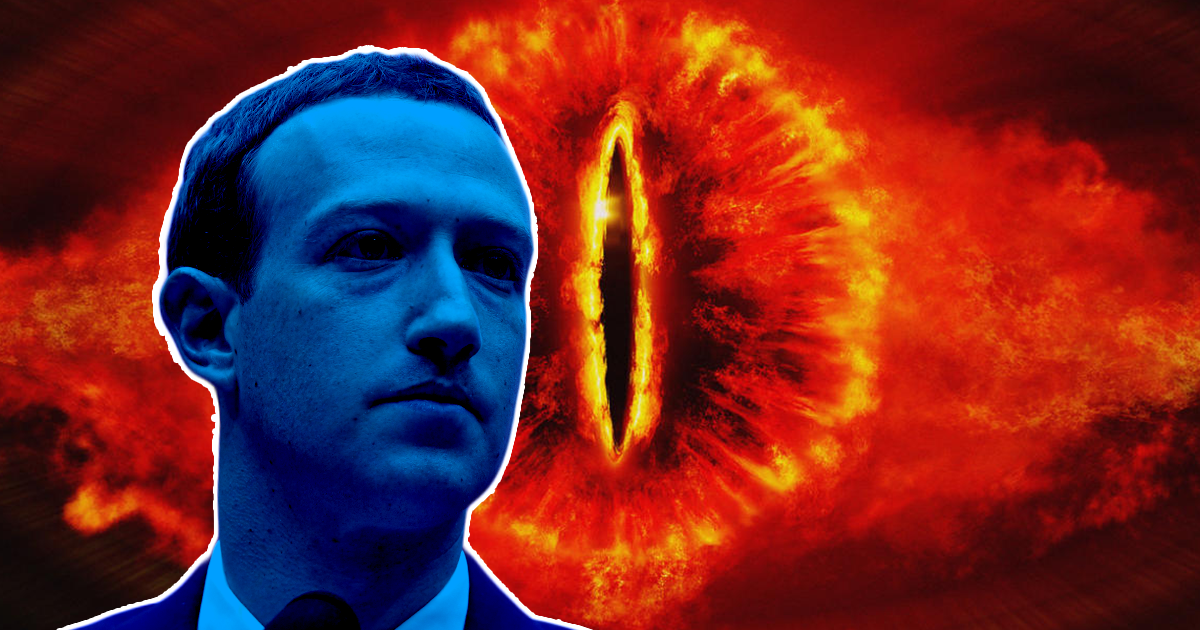 It sounds like Meta founder and CEO Mark Zuckerberg isn't exactly loved by the people working for him.

During a recent interview with YouTuber Tim Ferriss, Zuckerberg revealed that he has a brand new nickname at the company.

"Some of the the folks who I work with at the company they say this lovingly, but I think that they sometimes refer to my attention as the Eye of Sauron."

Those folks are, of course, referring to the Dark Lord's form in the "Lord of the Rings" books and movies.

But rather than focusing too much on, you know, the association with the books' literal embodiment of evil, Zuckerberg honed in on a conveniently different interpretation. He claims his new moniker refers to his "unending amount of energy to go work on something."

In short, Zuckerberg is the kind of boss who likes to preside over his underlings with the same kind of intensity that could cast an eternal shadow on Mordor — if he so chooses.

It's perhaps representative of a greater work culture coming out of Silicon Valley that has often prioritized productivity and long working hours over a healthy work-life balance.

At least Zuckerberg seems to be aware of the potential harm his Eye of Sauron could do, telling Ferriss that he tries to "diffuse" his energy and "manage my schedule so I can actually focus on the things that I'm naturally thinking about."

The admission comes as Meta has shifted much of its focus to developing the Metaverse, an unpopular virtual reality playground that just hasn't really caught on in any meaningful way — yet, at least.

And Zuckerberg is hellbent on pushing that agenda, even if it's not the most popular option.

"At this point, I kind of feel like if people fully feel like they understand what we are as a company and what we're doing, then I'm not pushing it hard enough," he told Ferriss.

In other words, Zuckerberg has made up his mind about his company's future, even if investors are far from enthusiastic about his vision.

But given the fact that he holds the majority of the company's voting shares, they'll either have to agree — or fall victim to his Eye of Sauron.

READ MORE: Mark Zuckerberg says his employees refer to his intense attention as 'the Eye of Sauron' after the menacing, flaming eye in 'The Lord of the Rings'

Read This Next
Will Somebody Think of the Children?
Mom Horrified by What Her Kids Are Seeing in Roblox
Scammers Scam On
The Fyre Fest Guy Is Off House Arrest and of Course His New Scheme Involves the Metaverse and Crypto
Confrontation is Hard
Former Facebook Exec Says Zuckerberg Has Surrounded Himself With Sycophants
Virtual Signing
Sign Language in Virtual Reality Actually Looks Kinda Awesome
Zesus
Interesting Theory: Mark Zuckerberg Is Trying to Become God and Build Heaven
More on Future Society
Balloon News
Yesterday on futurism
China Says "Spy Balloon" Soaring Over America Is Completely Innocent
Down in Flames
Wednesday on the byte
Elon Musk Apparently Thinks Twitter Is a "Flaming Dumpster Rolling Down the Street"
All Tomorrow's Pa...
Wednesday on the byte
Party Startup Says It Has Zero Plans to Make Any Money With Investors' Funds
READ MORE STORIES ABOUT / Future Society
Keep up.
Subscribe to our daily newsletter to keep in touch with the subjects shaping our future.
+Social+Newsletter
TopicsAbout UsContact Us
Copyright ©, Camden Media Inc All Rights Reserved. See our User Agreement, Privacy Policy and Data Use Policy. The material on this site may not be reproduced, distributed, transmitted, cached or otherwise used, except with prior written permission of Futurism. Articles may contain affiliate links which enable us to share in the revenue of any purchases made.
Fonts by Typekit and Monotype.