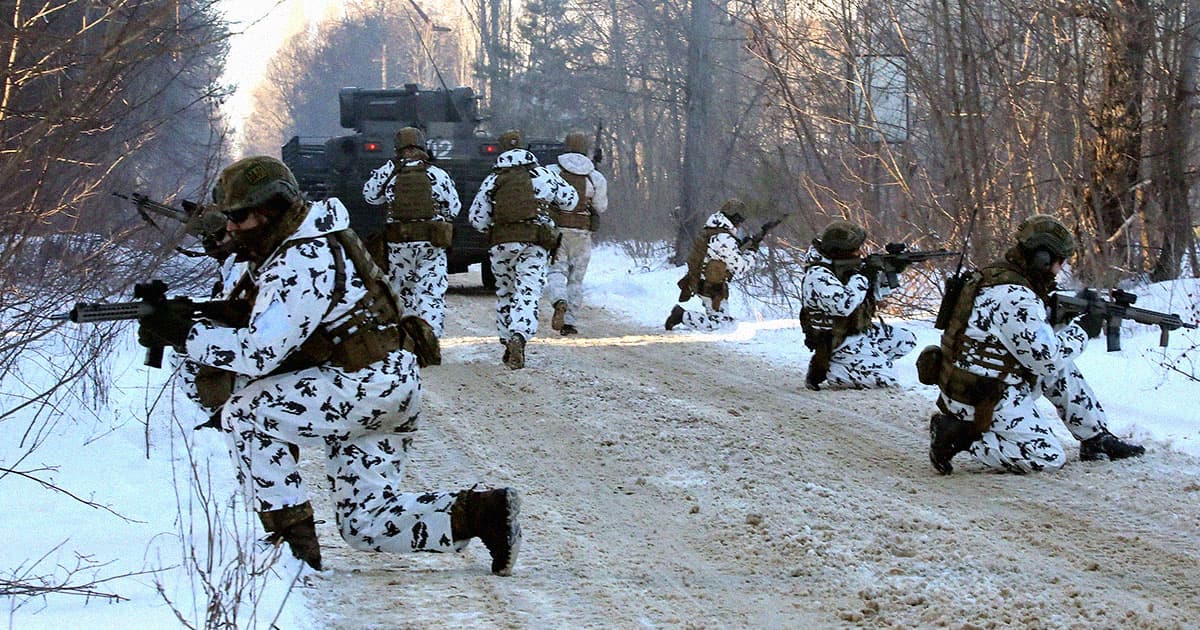 Pripyat may not be as radioactive as one would expect.

Pripyat may not be as radioactive as one would expect.

Threats of Russian invasion have led the Ukrainian military to a bizarre training location — the Chernobyl Exclusion Zone.

As CNN reports, swaths of international journalists descended upon Pripyat, the abandoned town near the Ukraine-Belarus border that served the Chernobyl Nuclear Power Plant prior to its meltdown 35 years ago, to watch the Ukrainian military spectacle as Russian forces continue to pile up along the border.

Though CNN focused on the propagandistic imagery of conducting drills at the site of the worst nuclear meltdown in history — and which is now a popular tourist destination, in no small part because of the dramatized HBO miniseries about the 1986 disaster — a Ukrainian soldier who spoke to France24 pointed out the obvious: Pripyat also makes for a great testing site because “there are no civilians around.”

“We can conduct exercises with real ammunition in a situation as close to actual urban warfare as possible,” the Ukrainian National Guardsman, who did not give his name, told France24.

While the ruins of the actual reactor, which are contained under a metal and concrete shell, are unsurprisingly very radioactive and will continue to be so for up to 20,000 more years, scientists have pointed out that it was the villages further away from the reactor that experienced the worst of the fallout due to weather conditions, making Pripyat, the town closest to the site of the plant and its history-making meltdown, significantly less dangerous than its further-out neighbors.

“There were villages that were reasonably close to the plant that didn’t get much contamination,” Fred Mettler, a University of New Mexico School of Medicine professor who worked on the U.N. Scientific Committee on the Effects of Atomic Radiation in 1989 and 1990, told LiveScience in 2019.

Pripyat is said to be safe enough to host thousands of visitors per year, and those who go on state-sanctioned tours generally go through radiation checkpoints at the beginning and end of their visits.

Nevertheless, France24 and other outlets noted that Ukrainian soldiers were spotted sporting Geiger radiation counters while reporters looked on at the military exercises, and in January the New York Times reported that Ukrainian police and border patrol were sent to guard the eerie, deserted forests of the 30 square kilometer Chernobyl Exclusion Zone armed with both Geiger counters and machine guns.

It’s a bizarre state of affairs when Chernobyl has become a flashpoint in the complex tensions between Russia and Ukraine. But hey, at least the military isn’t using it to host marriage proposals or make booze.

READ MORE: Ukrainians prepare for war at the site of the world’s worst nuclear disaster [CNN]

Great Balls of Fire
“Radioactive Gobstoppers” Could Stop the Next Nuclear Reactor Meltdown
6. 30. 20
Read More
Nuclear Power Used to Seem Like the Future. Now Its Fate in the US Is in Question.
9. 27. 18
Read More
Chernobyl Is Being Transformed Into an Immense Renewable Energy Farm
1. 15. 18
Read More
+Social+Newsletter
TopicsAbout UsContact Us
Copyright ©, Camden Media Inc All Rights Reserved. See our User Agreement, Privacy Policy and Data Use Policy. The material on this site may not be reproduced, distributed, transmitted, cached or otherwise used, except with prior written permission of Futurism. Fonts by Typekit and Monotype.