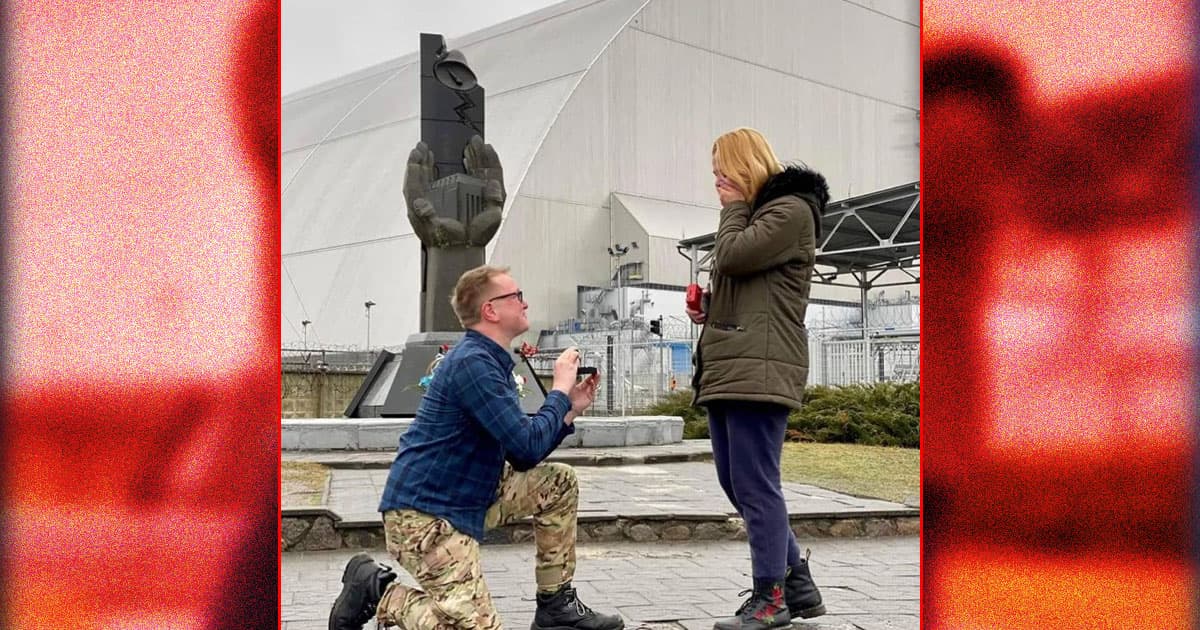 Couple Gets Engaged at Site of Chernobyl Nuclear Meltdown

Who says romance is dead?

Who says romance is dead?

What could possibly be more romantic than getting engaged to be wed at the site of a nuclear disaster?

It's bad enough that Chernobyl tourism took off after after the seminal 2019 HBO miniseries illustrated in dramatic splendor the worst nuclear disaster in history — but to seek out that particular backdrop for what's presumably is one of the happiest moments of one's life is... well, something else entirely.

In an Instagram post by a company that runs "Contamination Zone" tours at the site of the nuclear meltdown in modern Ukraine, the person behind the tour purveyor's social media account showed off the happy couple. Bih sviatyi!

Redditors who unearthed the post were quick to mock the betrothed couple.

"I wish them both a wonderful half-life," wrote one.

"I wonder if there was any fallout from this," quipped another.

It's true that the urge to stare into the face of the macabre is undoubtedly human. From the two Museum of Death locations in the United States (in Los Angeles and New Orleans, two very gory cities) to the enduring and problematic popularity of the true crime genre, people simply love to learn about the kinds of terrible things that happen to other people, perhaps as a sort of mental balm against fears that terror and tragedy may befall them someday.

But there's something uniquely eyebrow-raising about people who choose to celebrate in such a solemn place — and especially one that is literally still radioactive.

Every relationship is different, but any couple who chooses to commit themselves to each other at such an infamously terrible place seems undoubtedly, well, toxic.

And more on the enduring danger of the contamination zone: Scientists Fear New Disaster at Chernobyl Meltdown Site

Lil Dudes
Something Cool Is Happening to the Frogs at Chernobyl
10. 3. 22
Read More
Good Neighbors
German Government Says It May Keep Nuclear Plant Open After All
7. 31. 22
Read More
Back Online
Japan May Need Nine Nuclear Reactors Turned On to Get Through Winter
7. 14. 22
Read More
+Social+Newsletter
TopicsAbout UsContact Us
Copyright ©, Camden Media Inc All Rights Reserved. See our User Agreement, Privacy Policy and Data Use Policy. The material on this site may not be reproduced, distributed, transmitted, cached or otherwise used, except with prior written permission of Futurism. Articles may contain affiliate links which enable us to share in the revenue of any purchases made.
Fonts by Typekit and Monotype.