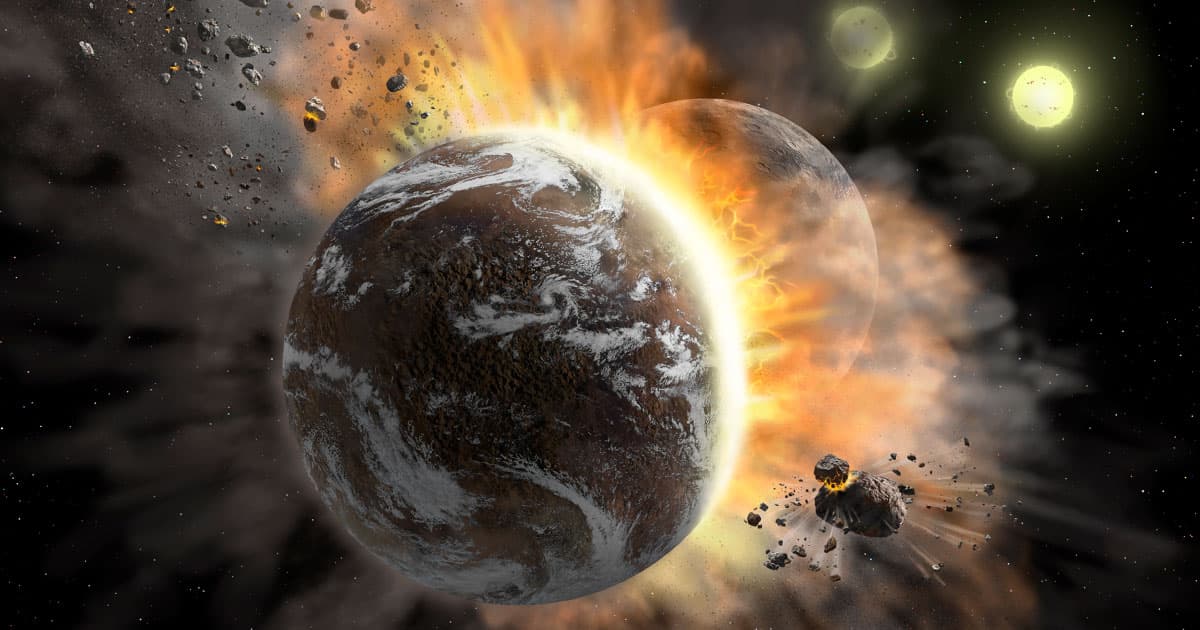 Two exoplanets recently crashed into each other, obliterating both and leaving a giant trail of dust and debris.

Two exoplanets recently crashed into each other, obliterating both and leaving a giant trail of dust and debris.

300 light-years away, two exoplanets recently crashed into each other, obliterating both and leaving a giant trail of dust and debris — or, in other words, planet guts.

The universe is a violent place, and space stuff collides with other space stuff pretty frequently. But usually these collisions happen in the earlier years of a solar system or galaxy — CNN reports that these shattered exoplanets give astronomers a rare glimpse into what happens when already-formed worlds collide.

Most surprising to astronomers was the fact that the dust leftover from the collision was warm, according to CNN. Because the shattered exoplanets were orbiting a pair of billion-year-old stars, they expected the dust to be much cooler than measurements suggested, according to research published in The Astrophysical Journal earlier this year.

"The warm dust around [the star system] gives us a glimpse into what catastrophic impacts between rocky exoplanets might be like," lead author and UC Santa Cruz grad student Maggie Thompson said in a new NASA press release. "We want to know how this system subsequently evolves after the extreme impact."

Because it was two fully-formed exoplanets that collided, astronomers now have an unusual opportunity to the composition of study rocky exoplanets, and perhaps how they formed in the first place.

"This is a rare opportunity to study catastrophic collisions occurring late in a planetary system's history," Carnegie Institute for Science researcher Alycia Weinberger said in the NASA release.

READ MORE: What happens when exoplanets crash into each other? [CNN]

More on other worlds: This Rocky World With Three Suns May Have an Atmosphere

Space Lumps
Scientists Say We May Be Extremely Wrong About the Universe
Apr 28
Read More
Into Darkness
Inside NASA's Bold Proposal to Probe the Mysteries of Dark Matter
Mar 11
Read More
Absolute Unit
Scientists Discover Gigantic New World that Defies Previous Planetary Understanding
12. 8. 21
Read More
+Social+Newsletter
TopicsAbout UsContact Us
Copyright ©, Camden Media Inc All Rights Reserved. See our User Agreement, Privacy Policy and Data Use Policy. The material on this site may not be reproduced, distributed, transmitted, cached or otherwise used, except with prior written permission of Futurism. Articles may contain affiliate links which enable us to share in the revenue of any purchases made.
Fonts by Typekit and Monotype.