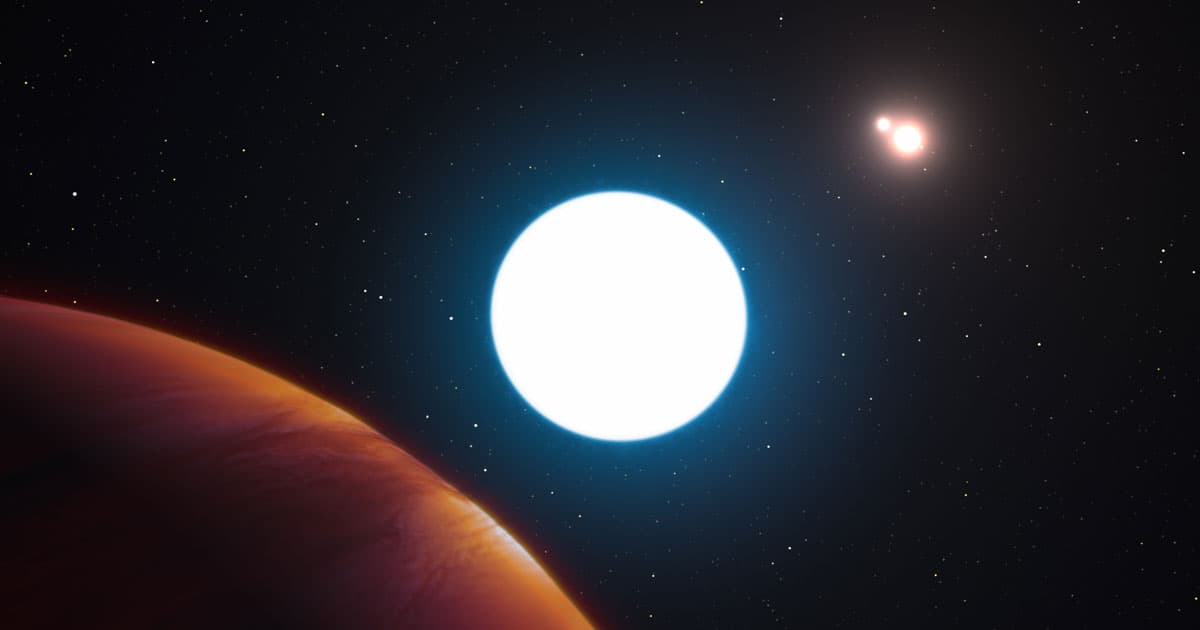 This Rocky World With Three Suns May Have an Atmosphere

This super-Earth is one of the best examples yet of a rocky planet with an atmosphere.

This super-Earth is one of the best examples yet of a rocky planet with an atmosphere.

A team of Harvard astronomers have spotted a rocky planet with three suns using data from NASA's Transiting Exoplanet Survey Satellite — and, tantalizingly, they think it could have an atmosphere.

It could give us a glimpse of the conditions on interstellar planets which, like Earth, have their own atmospheres. But unfortunately, this super-Earth is simply too hot to contain the ingredients for life.

The rocky planet is roughly 1.38 times the size of Earth and over 22 light-years away. A paper detailing the discovery was published in the Astronomical Journal back in June.

As for the chance it could feature oxygen in its atmosphere, lead researcher Jennifer Winters is not hopeful. "It's not in the habitable zone of its star," she said in a statement. "It's too close. It's too hot. But if it's possible that there's oxygen in the atmosphere that could come from other sources than life, that's good to know."

Still, the rocky orb is worth studying. "It's one of the best examples of a rocky planet that might have an atmosphere that we can study to see what it's made of," Winters added.

The team is hoping to spot the planet and analyze its atmosphere when the planet passes in front of its main star. That will happen in a couple of months' time, but until then they'll use data from the Giant Magellan Telescope in Chile to probe its mysteries further.

More on exoplanets: Newly Discovered Exoplanet Is “Unlike Any Other”

Absolute Unit
Scientists Discover Gigantic New World that Defies Previous Planetary Understanding
12. 8. 21
Read More
Xenobot Dynasty
Scientists Create Synthetic Organisms That Can Reproduce
11. 29. 21
Read More
So Close But So Far
Astronomers May Have Spotted a New Planet Around the Nearest Star
2. 10. 21
Read More
+Social+Newsletter
TopicsAbout UsContact Us
Copyright ©, Camden Media Inc All Rights Reserved. See our User Agreement, Privacy Policy and Data Use Policy. The material on this site may not be reproduced, distributed, transmitted, cached or otherwise used, except with prior written permission of Futurism. Fonts by Typekit and Monotype.