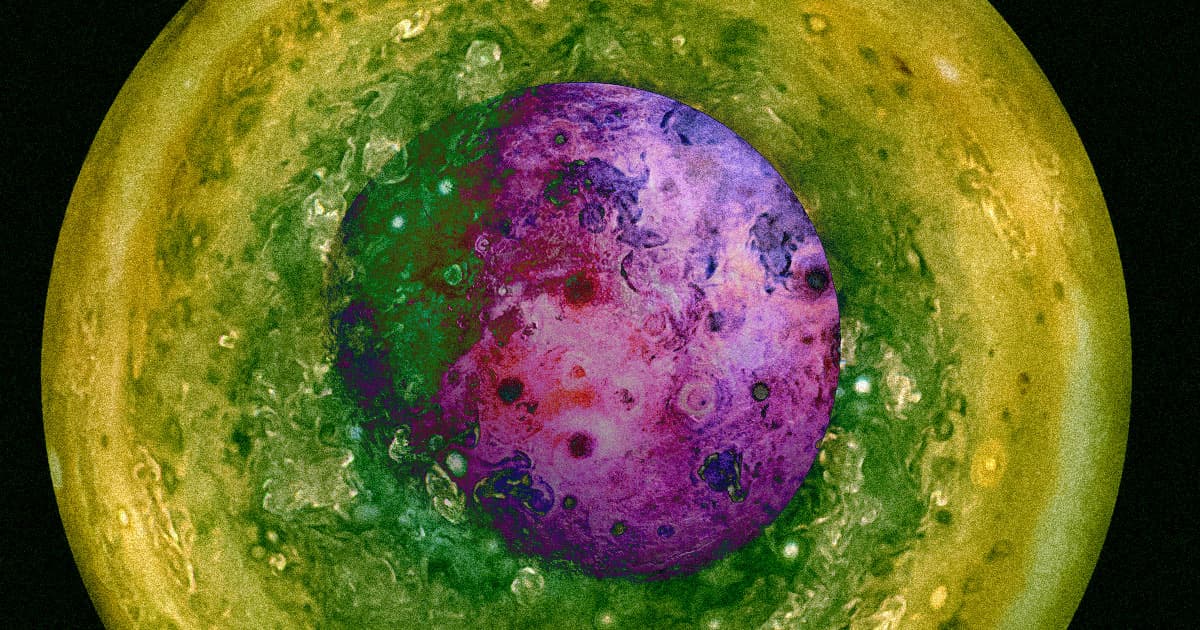 Jupiter May Have Absorbed a Smaller Planet

Did the solar system's largest planet eat one of its siblings?

Did the solar system's largest planet eat one of its siblings?

Jupiter's core is a bizarre mix of solid rocks mixed with a diffuse bubble of hydrogen gas. And the story of how it got that way has long eluded explanation.

But now scientists think they're on to something, suggesting that gas giant absorbed another protoplanet during a head-on collision some 4.5 billion years ago when our solar system was forming, according to Science News. The brutal hypothesis could finally explain why the planet's core is so diffuse and fragmented  — and also shed light on the solar system's earliest days.

A team of astronomers from Japan, China, Switzerland, and the U.S. used data from NASA's Juno space probe to investigate Jupiter's structure and composition, according to research published Wednesday in the journal Nature.

They tested other possible explanations for how the inner core of Jupiter became so diffuse, such as gradual erosion caused by high-speed winds or the possibility that the core contained gas from the start. But the ancient impact, the scientists found, is not only a plausible explanation but may be the one that best matches observational data.

If they're right, it means our solar system was a violent place colossal protoplanets could crash into one another and even merge.

Jupiter Ascending
A Wave of Incredible Heat Ripped Through Jupiter
10. 14. 22
Read More
Space Lumps
Scientists Say We May Be Extremely Wrong About the Universe
4. 28. 22
Read More
The James Webb Space Telescope Is Going to Stare Straight Into Jupiter
4. 12. 22
Read More
+Social+Newsletter
TopicsAbout UsContact Us
Copyright ©, Camden Media Inc All Rights Reserved. See our User Agreement, Privacy Policy and Data Use Policy. The material on this site may not be reproduced, distributed, transmitted, cached or otherwise used, except with prior written permission of Futurism. Articles may contain affiliate links which enable us to share in the revenue of any purchases made.
Fonts by Typekit and Monotype.