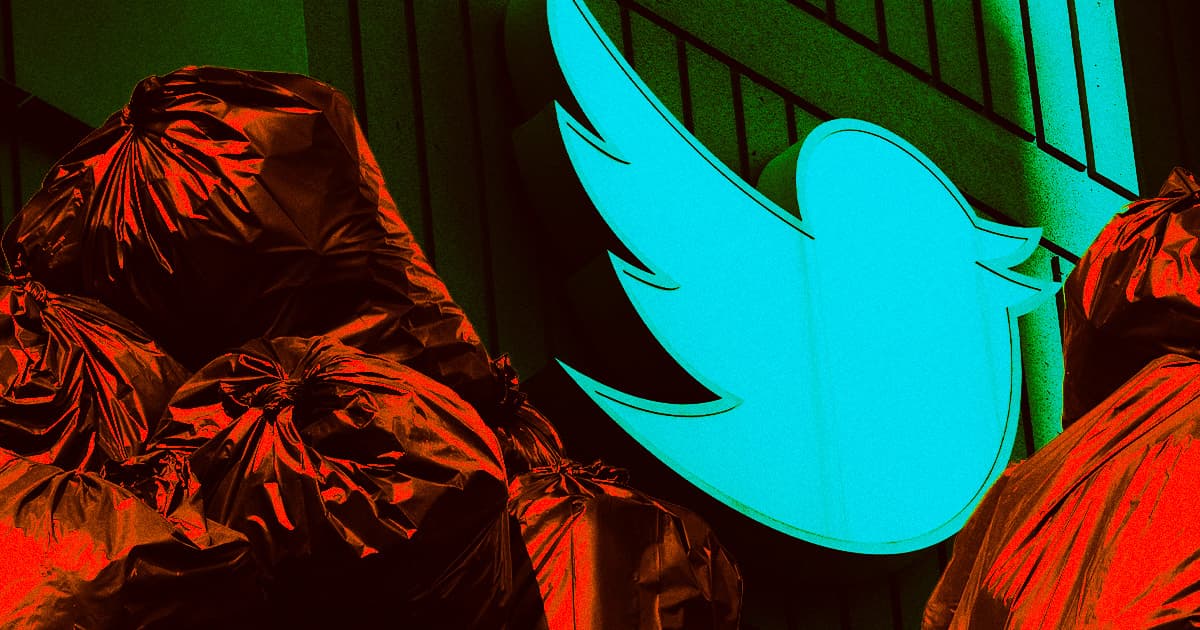 Between the chaotic Saga of the Blue Checks, unpaid bills, and mass firings followed by hasty re-hirings, you'd be forgiven for thinking that newly-anointed Twitter CEO Elon Musk's acquisition of the social media platform is, in short, a giant mess.

That in mind, it might only be right that the state of the literal building matches the acquisition's overall vibe. Case in point, Bloomberg reports that as of this morning, Twitter's janitorial staff is officially on strike. Their union contract is up on Dec 9, and Musk, in apparent direct violation of San Francisco law, is reportedly refusing to renew the agreement, thus refusing rehire the workers.

"Twitter doesn't seem to understand how important it is to keep a clean house," Elizabeth Strater, the communications director for the California Labor Federation, told Bloomberg, "and respect the people who take out the trash."

Janitors are picketing outside Twitter Headquarters in San Francisco. A representative with the local SEIU Union says they were told Friday that Twitter is ending the contact with the group that contracts to clean Twitter offices. pic.twitter.com/4iCT92IQH4

The impacted janitors, who took to picketing the building at 6am this morning, have noted the particularly cruel timing of the layoffs.

"Our janitors were given the bad news that less than three weeks before Christmas, we're gonna be out of jobs," said Olga Miranda, the president of the janitors' union, as heard in a video of this morning's protest, "with nowhere [to go] as a backup plan, because all of this was unexpected."

Given his history as a vocal union opponent, Musk's alleged unwillingness to negotiate here isn't terribly surprising. His anti-union conduct is perhaps most visible at Tesla, where employees have won multiple lawsuits involving the Tesla CEO's anti-organizing rhetoric and behavior.

Musk has also been generally unceremonious towards Twitter employees throughout his platform takeover, firing workers — without any real warning — in the middle of the night; going back on his promises to fire certain numbers of employees, only to turn around again and do it anyway; and even grossly harassing fired employees on the internet. You know, like a grown up.

Now, it looks like Twitter's janitors — who, it's worth noting, likely have far less to fall back on than Twitter's exited engineers — are caught in Musk's chaotic crossfire, too. The CEO, meanwhile, is reportedly putting his time and energy towards building naptime rooms for the "hardcore" workers who stuck around, because that's definitely what the now-very-glitchy app needs most right now.

The Musk of it all aside, our thoughts are with the janitors during this holiday season.

READ MORE: Twitter's Janitors Are on Strike at Its San Francisco Headquarters [Bloomberg]