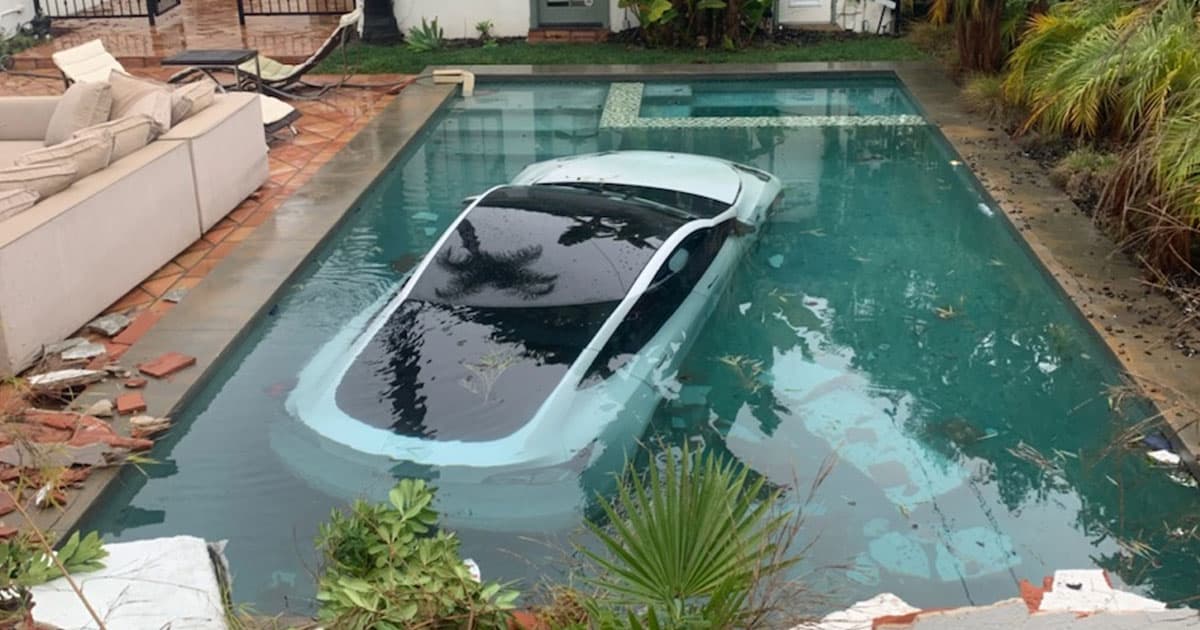 Going for a Dip

Tesla CEO Elon Musk may have promised that his company's long-awaited Cybertruck could double as a boat — but that doesn't mean the company's other vehicles fare well in water, as demonstrated by a terrifying incident that occurred on Tuesday morning in Pasadena, California.

A Tesla driver "hit the accelerator instead of the brake," causing it to drive "through a wall and into a pool," according to a tweet by the Pasadena Fire Department.

An image shared by the fire department indeed shows a white Tesla at the bottom of a pool, surrounded by broken tiles and a shattered retaining wall.

Fortunately, three occupants, including a child, were rescued by two good samaritans from a nearby preschool, who promptly jumped in the pool to rescue them.

None of the occupants suffered any injuries, according to officials. And notably, neither the company's controversial Autopilot nor Full Self-Driving modes were said to be engaged at the time of the accident.

Tesla vehicles are relatively heavy and dense, meaning that there isn't much time in the event of being submerged in water.

"Pretty quickly after the vehicle crashed," Lisa Derderian, spokesperson for the city of Pasadena, told the LA Times, "it started to submerge under water."

The incident could've played out much worse. There have been several instances of Tesla door handles — which electronically retract into the body of the vehicle for improved aerodynamics — refusing to open in the event of a fire.

Writ large, Tesla vehicles remain some of the safest cars on the roads — notwithstanding some of their driver assistance features — and have consistently scored well in tests.

Just last week, for instance, a man drove his Tesla off of a 250-foot cliff. Miraculously, the driver as well as his wife and two children survived the plummet without suffering life-threatening injuries.

READ MORE: Three people, including a 4-year-old boy, are rescued after Tesla crashes into a pool [Los Angeles Times]