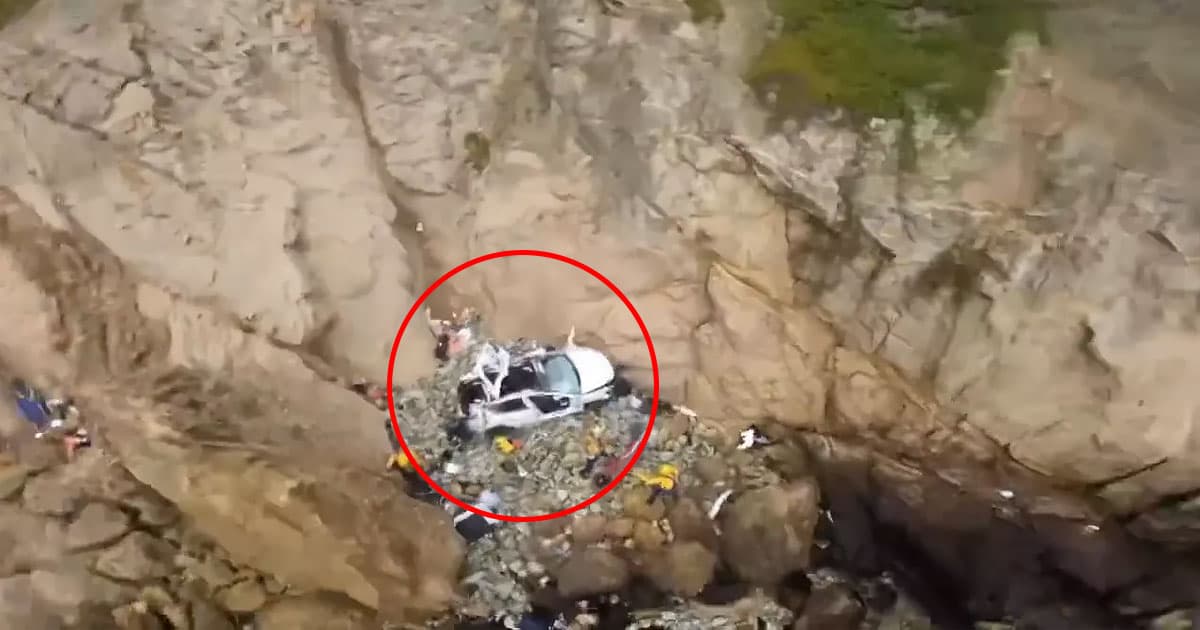 "We were actually very shocked when we found survivable victims in the vehicle."

"We were actually very shocked when we found survivable victims in the vehicle."

According to officials, a man intentionally drove his Tesla off a 250-foot cliff in California in an alleged attempt to murder his family who were also in the vehicle, NBC News reports.

Miraculously, the driver as well as his wife and two children survived the plummet without suffering life-threatening injuries — a testament to the electric carmaker's safety standards, even as it faces criticism on many other fronts.

A dramatic video shared by the Golden Gate Division Air Operations shows the smashed car at the bottom of the cliff, just feet away from the crashing waves.

"We were actually very shocked when we found survivable victims in the vehicle," Brian Pottenger, the incident commander for the California Department of Forestry and Fire Protection, told NBC. "So that actually was a hopeful moment for us."

The incident occurred on Monday around 20 miles south of San Francisco off of the scenic Pacific Coast Highway.

The 41-year-old driver, Dharmesh Arvind Patel, has since been arrested and will be charged with attempted murder and child abuse, according to California Highway Patrol.

"Based on the evidence collected, investigators developed probable cause to believe this incident was an intentional act," the patrol said in a statement.

Images taken by firefighters show the mangled remains of the white EV at the bottom of a rocky cliff. The four individuals were rescued by a helicopter crew.

Responders were astonished by what they found.

Pottenger also noted that it is "very, very rare" for people to survive such an ordeal, noting that the children's car seats likely played a role in saving their lives.

According to a San Mateo County statement, the two children "were unharmed."

"The damage to the vehicle would indicate that it hit, and then flipped several times," he added, as quoted by CNN.

As for Tesla's highly controversial Autopilot driver assistance feature, the highway patrol said that it likely wasn't a "contributing factor."

READ MORE: Tesla driver who plunged his family off California cliff did so on purpose, officials say [NBC News]

More on Autopilot: The Director of "District 9" Says His Tesla's Window Spontaneously Shattered For No Reason