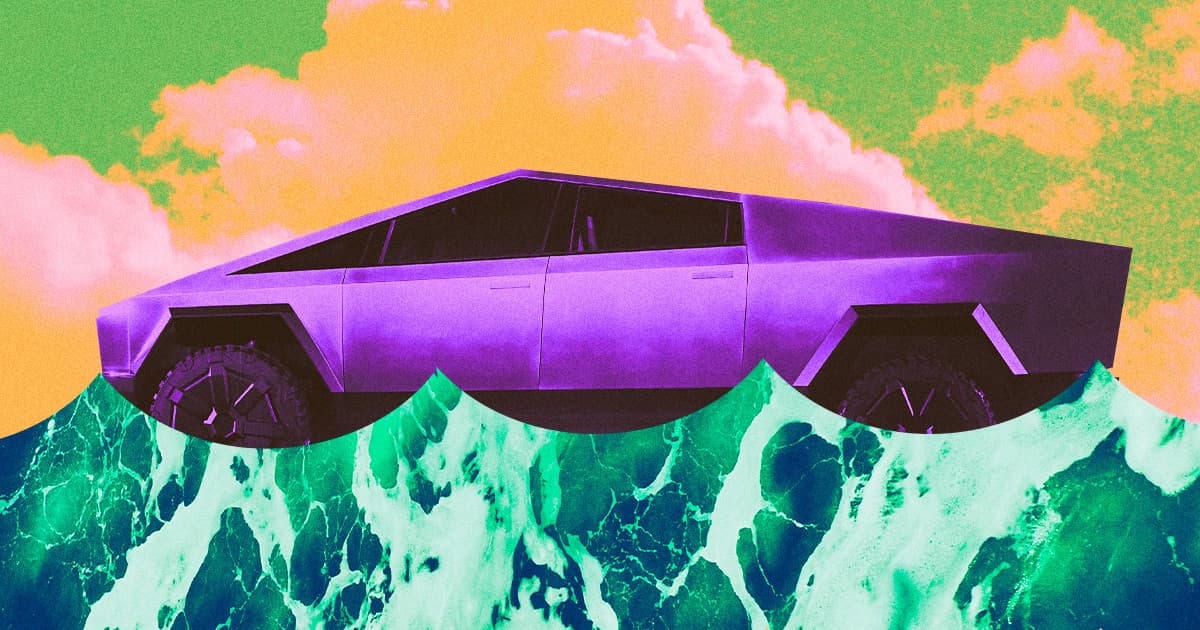 Elon Musk Says the Cybertruck Will Double as a Boat

Tesla’s elusive Cybertruck has had fanboys and potential buyers excited for years since it was first unveiled in 2019. It’s not hard to see why, with its sleek, polygonal features looking like something rendered in the original 1982 "Tron," and claims of remarkable durability and bulletproof glass that sounds like the selling points of an action figure’s car.

Piling on all that, here’s another claim from Tesla CEO Elon Musk: the EV truck will also double as a boat, he says.

"Cybertruck will be waterproof enough to serve briefly as a boat, so it can cross rivers, lakes and even seas that aren’t too choppy," said Musk in a tweet. "Needs [to] be able to get from Starbase to South Padre Island, which requires crossing the channel."

Dead in the Water

In all likelihood, Musk’s tweet is probably just him being facetious once again, but you can never be sure. In 2020, Musk tweeted that the truck could "even float for a while," but did not go as far to equate it to an actual watercraft like he did today. (Interestingly, one overly-eager company already envisioned an amphibious kit for the Cybertruck earlier this year.)

It’s not even Musk’s most ridiculous claim regarding the brutalist whip. In 2019, Musk tweeted that a special "pressurized edition" of the Cybertruck would be "the official truck of Mars," further hinting that it would be aboard a planned Starship cargo mission to the Red Planet, which of course hasn't happened yet — and, to be realistic, may never.

Pretty much the only claim we’ll believe from Musk, for now, is his sobering announcement that the initially promised $39,900 price point of the Cybertruck is dead and gone, so expect to pay more than that if your eyes are set on the vehicle.

Whether it can actually double as a boat or not, Musk should probably be careful about what he puts out there, considering that people actually bought into the Mars Cybertruck hype. If the boat claims are about as not-bulletproof as the supposedly bulletproof glass, we'd recommend not planning on driving one into a pond.

More on the Cybertruck: Extremely Beat Up Tesla Cybertruck Spotted on Public Street