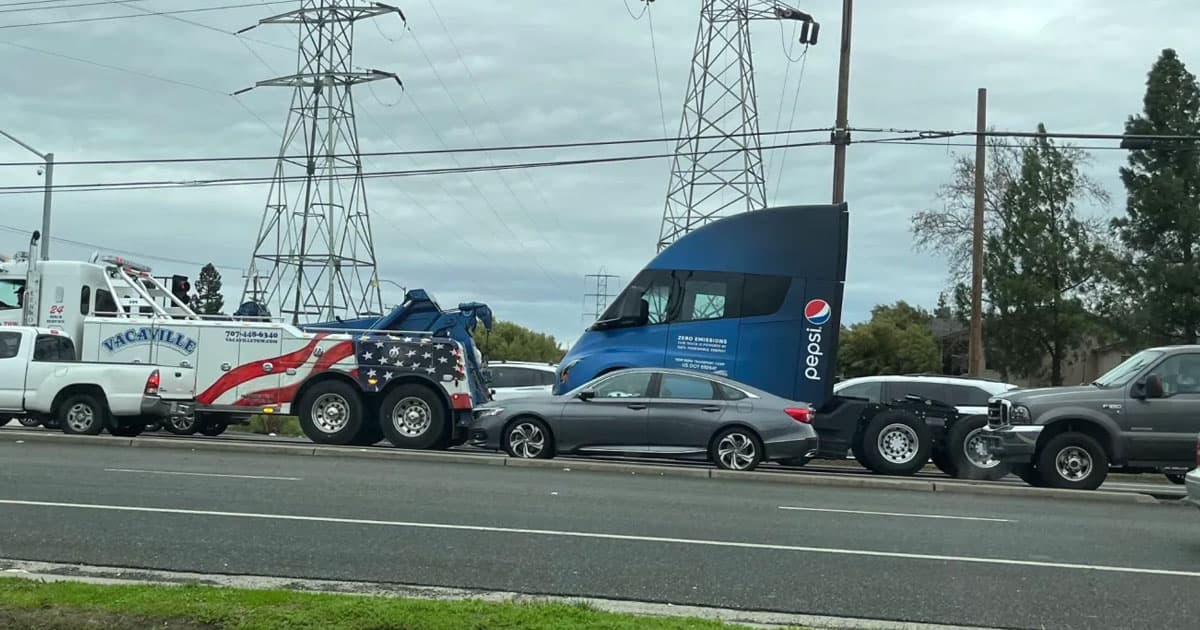 PepsiCo is one of the earliest adopters of Tesla's creatively named "Semi" all-electric semi-truck. Receiving its first units in December, PepsiCo has already put the Semis to use on the road. But hardly a month later, a sad looking Semi has already been spotted getting towed, raising questions over how the pilot program is going if the machines are already having mechanical difficulties.

Images of the Semi in Pepsi livery appear to have been first shared on the RealTesla subreddit, Elektrek reports, a forum dedicated to the automaker's skeptics.

The uploader claims that the semi was spotted in Sacramento, California, which is where PepsiCo previously confirmed in a tweet that it would be using Tesla Semis to service its nearby facility.

$TSLA semi getting towed on Gerber Road. Say it ain’t so. pic.twitter.com/QcIKm099cP

As of now, that's the extent of what's known about the truck's condition.

For all we know, there could be a non-breakdown related reason that the truck needs the help of a flatbed — but at the same time, that doesn't seem likely.

Consider other reports, both recent and in the months preceding, of Tesla Semis breaking down. Take an incident in October, when a damning video captured a broken-down Tesla Semi hogging an entire onramp, much to the chagrin of those stuck in traffic.

All in all, it's not a great look for the automaker or its mercurial CEO Elon Musk. Musk has been publicly enthusiastic about the Tesla Semi's debut, hyping up Pepsi's acquisition of his company's trucks in November in a viral tweet. But with great exposure comes great scrutiny, and to say there's a lot riding on the Tesla Semi would be an understatement.

So these most recent images — while devoid of context — are ultimately a damning portrait of the Semi's supposedly impressive capabilities, whether it is fair to come to that conclusion or not. Nor is it the ideal advertisement for a potential shift to EV trucking, but hopefully newly emerging details will help set the record straight.

More on Tesla: Tesla Mocked for Claiming Cybertruck Can Pull "Near Infinite Mass"