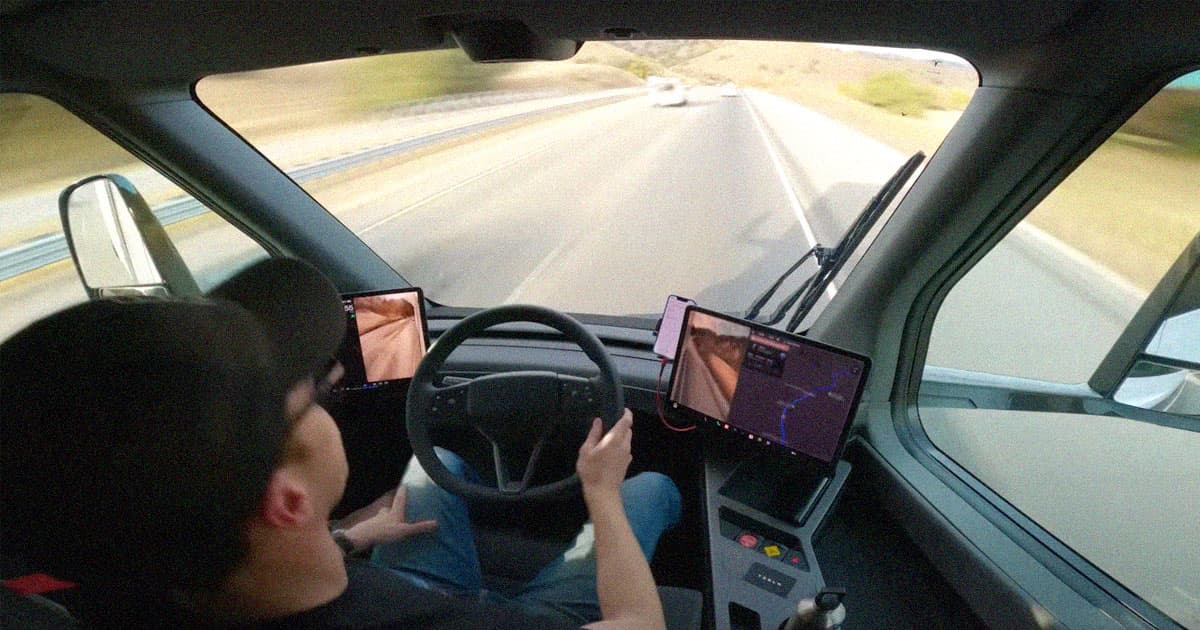 Tesla released a timelapse video of one of its all-electric Semi trucks driving a 500-mile journey while carrying 82,000 pounds, the equivalent of a full load, on a single charge.

It's a seriously impressive feat, suggesting the Elon Musk-led company could have a big win on its hands when the trucks hit the market.

We still don't know how many trucks the company will be able to produce, or how much it costs — but we do know that a fully loaded semi covering serious distance on a single charge could prove to be revolutionary for the trucking industry.

Tesla delivered its first Semi truck to PepsiCo on Thursday, five years after Musk showed off the vehicle to the public and three years after it was meant to roll off the lot for the first time.

"If you’re a truck driver and you want the most bad-ass rig on the road, this is it," Musk said at Thursday's celebratory Semi Delivery Event.

"We completed our first cargo run with a very enormous amount of [PepsiCo's] Frito-Lays," he added.

Tesla claims its massive batteries could be recharged up to 70 percent in just half an hour, a figure that has yet to be confirmed by a third party.

A 500-mile range is something many once thought impossible. Back in 2020, tech titan and fellow billionaire Bill Gates argued in a blog post that the Semi would "probably never" work since batteries are too heavy.

Musk snapped back, arguing that Gates had "no clue."

The truck's range could blow the competition out of the water. As of right now, competing all-electric trucks aren't even close to Tesla's 500-mile figure, as Electrek points out.

But responding to the pent-up demand for the truck could prove difficult. According to The Wall Street Journal, Tesla may only be able to produce 100 trucks by the end of this year, despite Musk promising to produce 50,000 of them by 2024 in October.

Tesla has also been feeling the hurt this year, with shares plummeting around 45 percent so far this year, wiping out half a trillion dollars in market capitalization.

And the biggest question? Probably how the batteries will degrade over years of heavy use.