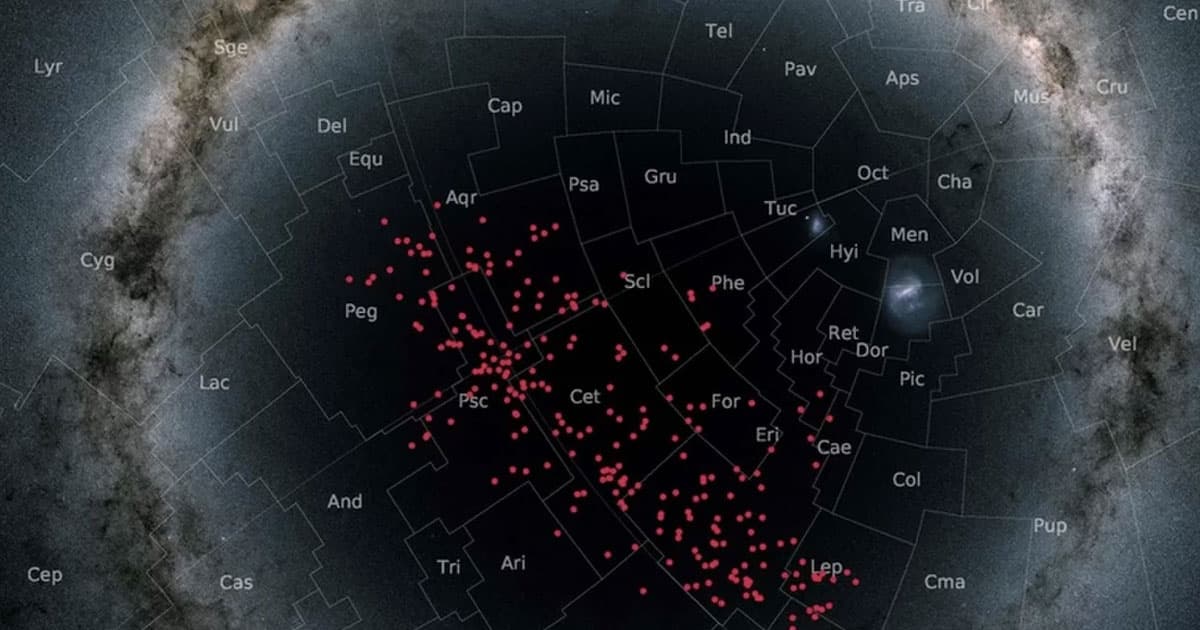 Scientists Found a “River of Stars” Flowing Through the Milky Way

This stellar stream has been hiding in plain sight.

This stellar stream has been hiding in plain sight.

The Milky Way is home to a variety of star clusters. Most of the time, its gravity quickly pulls these clusters apart, but some clusters have enough mass to remain stuck together, and sometimes the clusters form stellar streams, which are river-like stretches of stars that orbit the galaxy.

Now, researchers have identified a billion-year-old stellar stream comprising nearly 4,000 stars — and it's remarkably close to our Sun.

In a study published in the journal Astronomy and Astrophysics on Thursday, a team from the University of Vienna details its discovery of this new stellar stream, which is approximately 1,300 light-years long and 160 light-years wide.

The team discovered the stream using data from the European Space Agency's Gaia satellite, and according to researcher João Alves, it's been hiding in plain sight.

"Astronomers have been looking at, and through, this new stream for a long time, as it covers most of the night sky, but only now realize it is there," he explained in a press release.

"As soon as we investigated this particular group of stars in more detail, we knew that we had found what we were looking for: A coeval, stream-like structure, stretching for hundreds of parsecs across a third of the entire sky," researcher Verena Fürnkranz said. "It was so thrilling to be part of a new discovery."

The researchers are already looking ahead to what new insights they may be able to glean from this river of stars, positing that it could lead to new information on how galaxies gain their stars, the discovery of new exoplanets, and an improved understanding of the Milky Way's mass and gravitational field.

"Finding things close to home is very useful," Alves said. "It means they are not too faint nor too blurred for further detailed exploration, as astronomers dream."

More on stellar streams: Dark Energy Survey Discovers Remnants of Other Galaxies Within Our Own

The Last Strand
Scientists Puzzled by Weird "Strands" at the Center of Our Galaxy
1. 26. 22
Read More
Star Stream
Something Is Ripping Apart the Nearest Star Cluster to Earth
3. 25. 21
Read More
Shooting Blanks
Astronomers Detect "Bullets" of Gas Shooting Out of Our Galactic Center
8. 20. 20
Read More
+Social+Newsletter
TopicsAbout UsContact Us
Copyright ©, Camden Media Inc All Rights Reserved. See our User Agreement, Privacy Policy and Data Use Policy. The material on this site may not be reproduced, distributed, transmitted, cached or otherwise used, except with prior written permission of Futurism. Articles may contain affiliate links which enable us to share in the revenue of any purchases made.
Fonts by Typekit and Monotype.