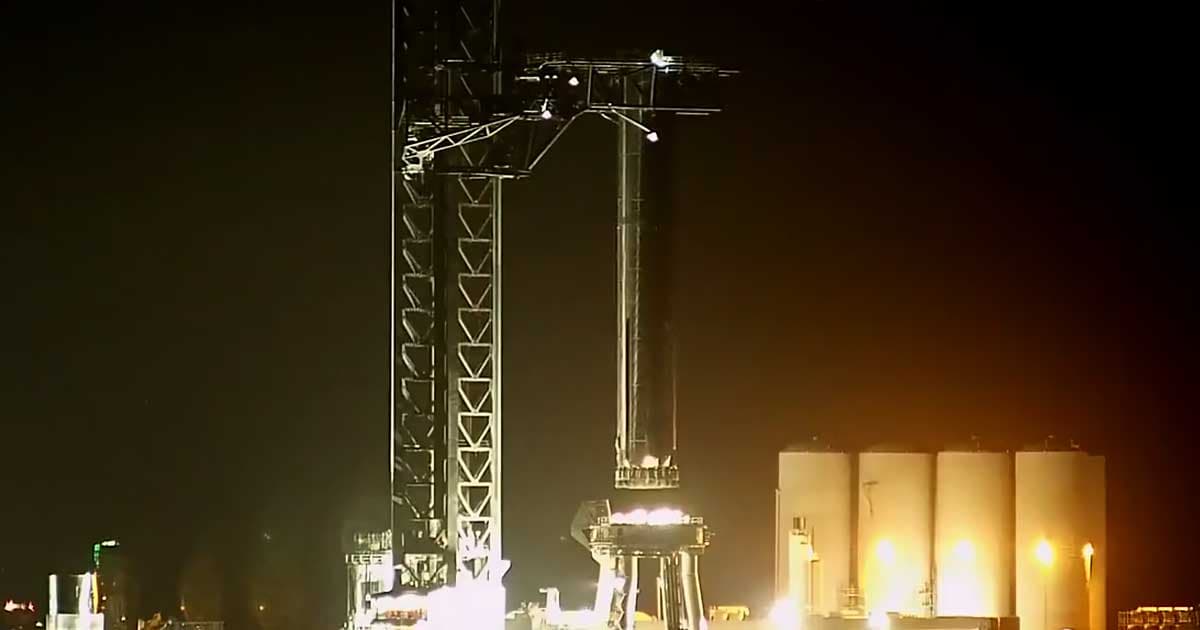 It finally did the thing!

It finally did the thing!

For the first time, SpaceX has managed to lift its gargantuan Super Heavy rocket booster, the world's most powerful rocket, onto the launch pad using its colossal "chopsticks"-wielding launch tower, as seen in footage shared by NASASpaceFlight.

It's a truly impressive feat of engineering, and one that brings SpaceX's inaugural Starship orbital test flight ever closer.

Timelapse of SpaceX lifting the world's most powerful rocket booster with Chopsticks for the first time.https://t.co/9tCZafcbaB pic.twitter.com/2q6KSEWz00

The rocket stage, dubbed Booster 7 and outfitted with 33 Raptor engines, made its way to the company's orbital launchpad at its testing facilities in Boca Chica, Texas on Thursday.

The company's 440-foot "Mechazilla" launch tower was then able to flex its two massive robot arms to carefully lift the Booster high up into the air, spin it around, and gingerly place it on the orbital launch pad.

The maneuver is a key part of the space company's plans to make its Starship super heavy platform reusable. In 2020, Musk said that the goal is to have Starship launch a staggering three times a day.

It's still unclear when the company's first-ever orbital test launch will take place, but given the fact that many of the pieces are starting to come together, it shouldn't be too long now.

"Starship will be ready to fly next month," Musk promised last week.

"We will have a second Starship stack ready to fly in August and then monthly thereafter," he added at the time.

Will SpaceX's launch tower approach pay off and allow the nearly 400-foot Super Heavy and Starship stack to successfully rocket into space — or will everything go up in smoke?

We can't wait to find out — the stakes are far higher than they've ever been.

Don't let the door hit you
Elon Musk Lobs Casual Space Station Burn at Moscow
Jul 28
Read More
Rocket Guy
This Might Be the Weirdest-Looking Rocket We've Ever Seen
Jul 25
Read More
Muellholland Drive
SpaceX Defector Is Aiming to Land on Mars Before Elon Musk
Jul 19
Read More
+Social+Newsletter
TopicsAbout UsContact Us
Copyright ©, Camden Media Inc All Rights Reserved. See our User Agreement, Privacy Policy and Data Use Policy. The material on this site may not be reproduced, distributed, transmitted, cached or otherwise used, except with prior written permission of Futurism. Fonts by Typekit and Monotype.