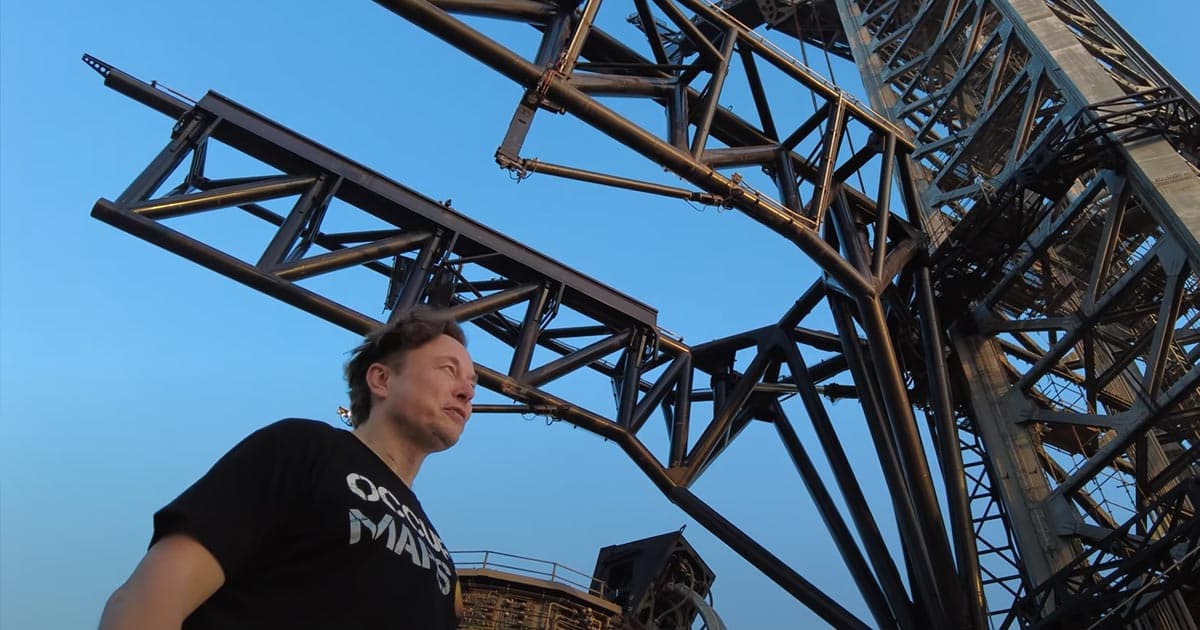 "We should get like a hang glider and jump off or something."

"We should get like a hang glider and jump off or something."

Ride to the Top

In a new video by YouTuber Tim "Everyday Astronaut" Dodd, SpaceX CEO Elon Musk can be seen ascending to the top of the space company's "Mechazilla" tower, a massive metal construction designed to aid during both launch and landing of the company's behemoth Starship spacecraft.

The company has yet to launch its Starship into orbit, but it has made strides in building the hardware meant to facilitate such a launch, laying the groundwork for could be a spectacular maiden voyage of both Starship and its accompanying — and even taller — Super Heavy booster.

"Yeah. I mean, this is pretty crazy," Musk told Dodd in the video. "I mean, there's a custom built tower with arms that are designed to catch the largest and heaviest flying object ever made and pluck it outta the air."

After several long and awkward elevator rides, the pair finally arrived at the top of the 469-foot tower — which, for perspective, is 100 feet taller than the Statue of Liberty.

"Wow, this is so epic," Musk admitted, taking in the views. "The Ship looks small from here," he said, while taking a smartphone picture of the incredible view, with a tiny Starship prototype in the distance.

"We should get like a hang glider and jump off or something," Musk joked. "That'd be sweet."

Musk took the time to explain how it all works, saying that the tower's "arms will be wide and as [Starship's] coming in, the arms will close go flush against the side of the vehicle and the vehicle will be descending through the arms."

It's a massive undertaking and a lot can go wrong. Despite the extraordinary complexity involved in catching a 165-foot spacecraft that weighs several hundred tons with a tower, the team is optimistic.

"We have not found a reason yet why it will not work," SpaceX's director of Starship launch engineering Joe Petrezelka told Dodd in the video.

"Success is one of the possible outcomes," Musk added. "The probability is uncertain, but it is above zero."