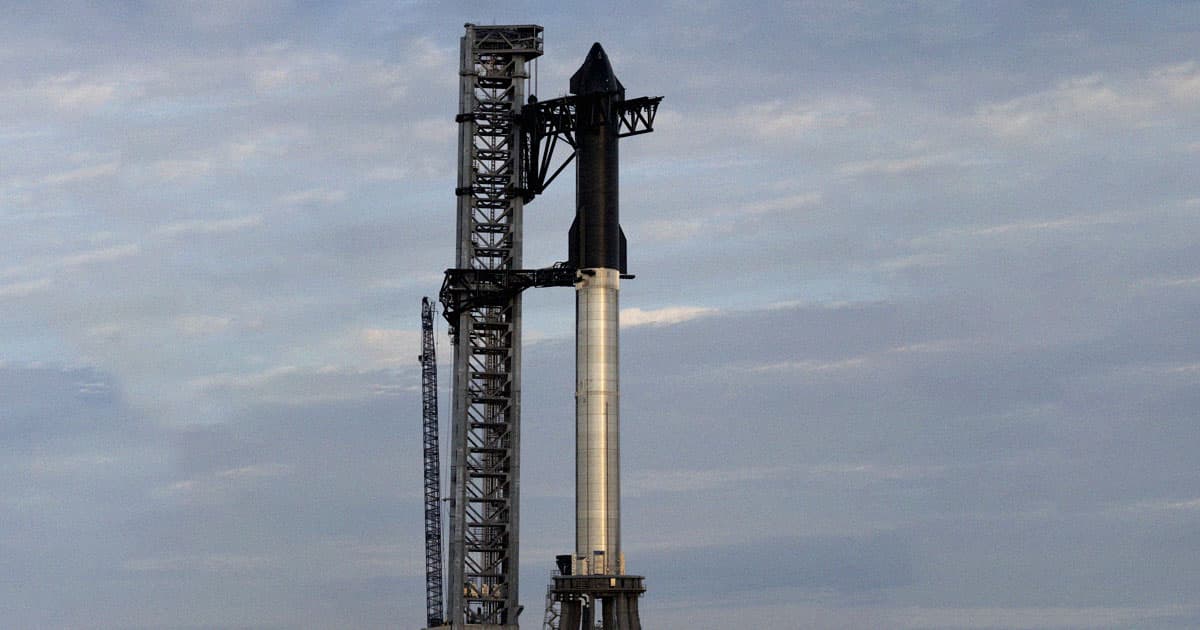 SpaceX Stacks Orbital-Class Starship on Booster, Hoists It With Mechazilla

SpaceX has successfully stacked its orbital-class Starship prototype, dubbed Ship 20, on top of its Super Heavy booster — a picturesque moment that takes us one step closer to the space company's first Starship launch into space.

It also happens to be the world's largest rocket ever assembled, as Teslarati points out. The next tallest rocket ever built was the Saturn V, standing at 363 feet. Together with its Booster, Starship stands at just shy of 400 feet tall.

It's the second time a Starship prototype has been stacked on top of a booster. But it's the first time the company used the "chopstick" arms of its "Mechazilla" launch tower to hoist the spacecraft prototype over two hundred feet into the air to set it down on top of the booster.

The stack will likely form the backdrop of a presentation given by CEO Elon Musk later today. Images shared by Musk on Twitter show the robotic "chopstick" arms slowly lifting the 160-foot spacecraft against the night sky. A drone video also shared by Musk shows the spacecraft in motion.

The space company has been working towards this moment for a while now, first constructing the massive 469-foot launch tower, then putting it to the test with the use of water ballasts.

While it's an exciting moment and a sight to behold, we still don't know when SpaceX will be ready for countdown. According to a filing submitted to the Federal Communications Commission in May 2021, the plan is to send the 400-foot Starship and booster into orbit and have it make a "powered, targeted landing" about 62 miles off the northwest coast of Kauai in the ocean.

"The Booster stage will separate approximately 170 seconds into flight," the document reads. "The Booster will then perform a partial return and land in the Gulf of Mexico approximately 20 miles from the shore.”

We'll hear more from Musk at tonight's presentation, where we might even get a date for Starship's inaugural flight to orbit.