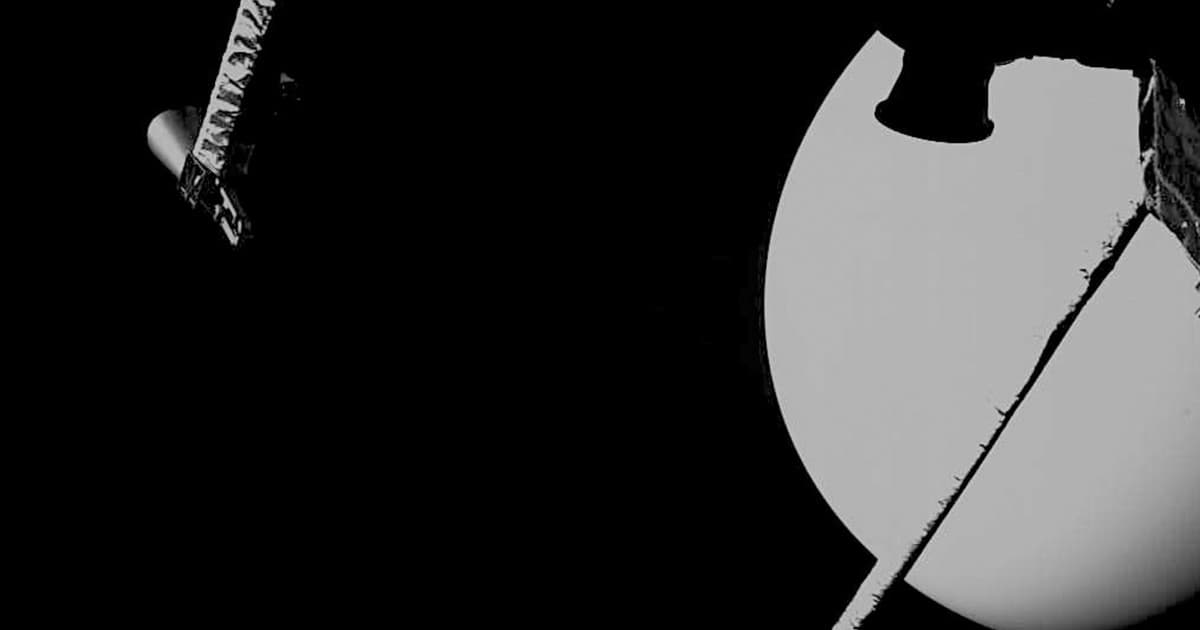 BepiColombo is Not a 70s Crime Drama

Spacecraft Shoots Epic Selfies With Venus in the Background

BepiColombo, the European-Japanese spacecraft headed to Mercury, snapped some incredible selfies this week while making a close flyby past Venus — and gathering data that could help flesh out recent findings that suggest there could be life in the inhospitable planet's atmosphere.

Courtesy of the European Space Agency (ESA) and Japan Aerospace Exploration Agency (JAXA), we get to see all 64 images taken 52 seconds apart in animated GIF form.

The short clip shows the spacecraft swoop by first the day then onto the night side of Venus — coming within 6,660 miles (10,720 kilometers) of the planet, according to the ESA.

The images were taken by Monitoring Camera 2 on board the Mercury Transfer Module, the spacecraft that carries both the ESA's Mercury Planetary Orbiter (MPO) and the Japanese space agency's Mercury Magnetospheric Orbiter (MMO).

Venus was far too bright to make out any details on its surface — even the fastest shutter settings on the spacecraft's cameras weren't able to dim it down enough, according to the ESA.

But that didn't stop the spacecraft from pointing some of its scientific instruments at the massive planet.

"We’ll have to be patient while our Venus specialists look carefully into the data, but we hope to be able to provide some atmosphere temperature and density profiles, information about the chemical composition and cloud cover, and on the magnetic environment interaction between the Sun and Venus," Johannes Benkhoff, BepiColombo project scientist at ESA, said in a statement.

BepiColombo is using the flyby as a way to pick up speed on its long journey to Mercury, also known as a gravity assist maneuver.

The move was the second of nine total flybys during the craft's seven-year trip to the innermost planet. It will still make one more flyby near Earth, two around Venus, and six total near Mercury to enter its orbit.

Scientists are already looking forward to BepiColombo's next Venus flyby in August 2021 as it will get much closer then.

More on BepiColombo: A Spacecraft Is Going to Hunt Life in Venus' Clouds This Week

Life on Venus
MIT Scientists Say Life May Have Been Detected on Venus After All
12. 21. 21
Read More
Water Canyon
Scientists Spot Hidden Water in Mars' Grand Canyon
12. 15. 21
Read More
Star Stream
Something Is Ripping Apart the Nearest Star Cluster to Earth
3. 25. 21
Read More
+Social+Newsletter
TopicsAbout UsContact Us
Copyright ©, Camden Media Inc All Rights Reserved. See our User Agreement, Privacy Policy and Data Use Policy. The material on this site may not be reproduced, distributed, transmitted, cached or otherwise used, except with prior written permission of Futurism. Articles may contain affiliate links which enable us to share in the revenue of any purchases made.
Fonts by Typekit and Monotype.