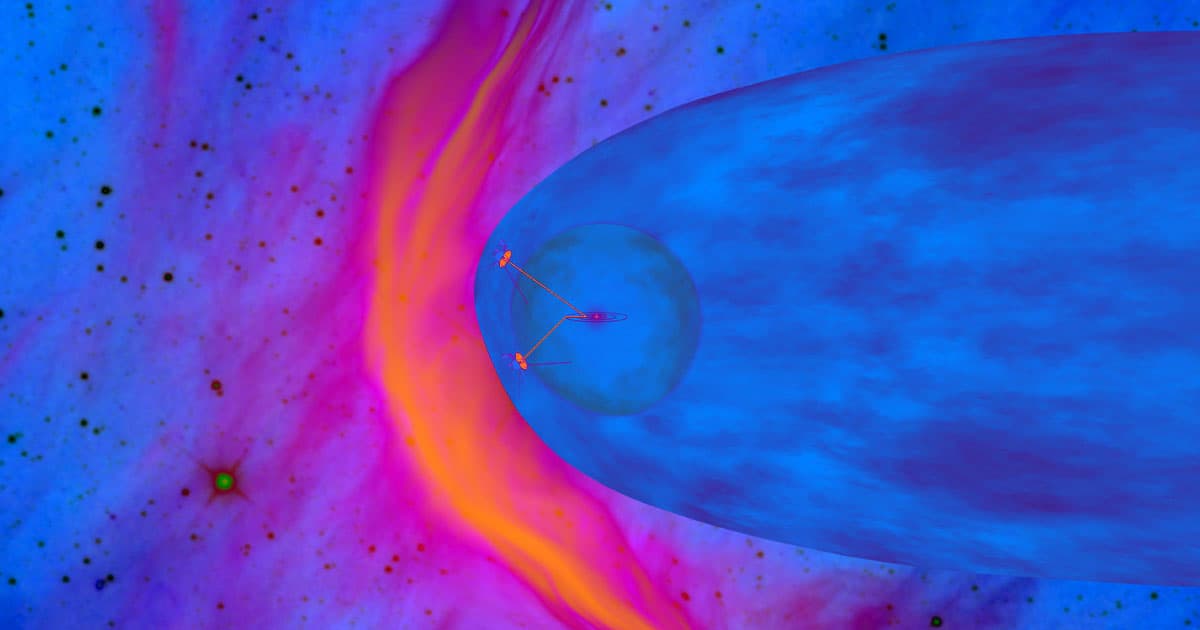 Our Solar System Is Blanketed in a Giant Wall of Fire

Voyager 2 broke through, but the wall could make interstellar travel difficult.

Voyager 2 broke through, but the wall could make interstellar travel difficult.

At the outermost edges of our solar system lies a barrier of super-hot plasma — a giant wall of fire from the Sun that defines the edge of interstellar space.

As Voyager 2 began its journey into interstellar space in late 2018, it recorded temperatures as high as 49,427 degrees Celsius (89,000 degrees Fahrenheit), according to Nerdist. And while the space probe seems to be fine, the plasma shield could pose a problem to NASA as it moves towards its planned interstellar mission.

Scientists are just now measuring the plasma layer, which was created and is maintained by solar winds that blow outward from the Sun to form a giant bubble, according to research published this month in Nature Astronomy.

According to a release from NASA's Jet Propulsion Laboratory, the new research suggests that Voyager 2 may not actually be in interstellar space yet, but rather stuck in a wide transitional region made of incredibly hot, compact plasma just beyond the outer reaches of the solar system.

More on interstellar space: Interstellar Object's Home Solar System May Resemble Our Own

The Hum
NASA Detects "Hum" Coming From Beyond Solar System
5. 10. 21
Read More
Planet Nein
Astronomers Want to Figure Out What the Hell Planet Nine Is Once and For All
7. 10. 20
Read More
Space Rocks
Materials Older Than the Solar System Found in Two Meteorites
1. 31. 20
Read More
+Social+Newsletter
TopicsAbout UsContact Us
Copyright ©, Camden Media Inc All Rights Reserved. See our User Agreement, Privacy Policy and Data Use Policy. The material on this site may not be reproduced, distributed, transmitted, cached or otherwise used, except with prior written permission of Futurism. Articles may contain affiliate links which enable us to share in the revenue of any purchases made.
Fonts by Typekit and Monotype.