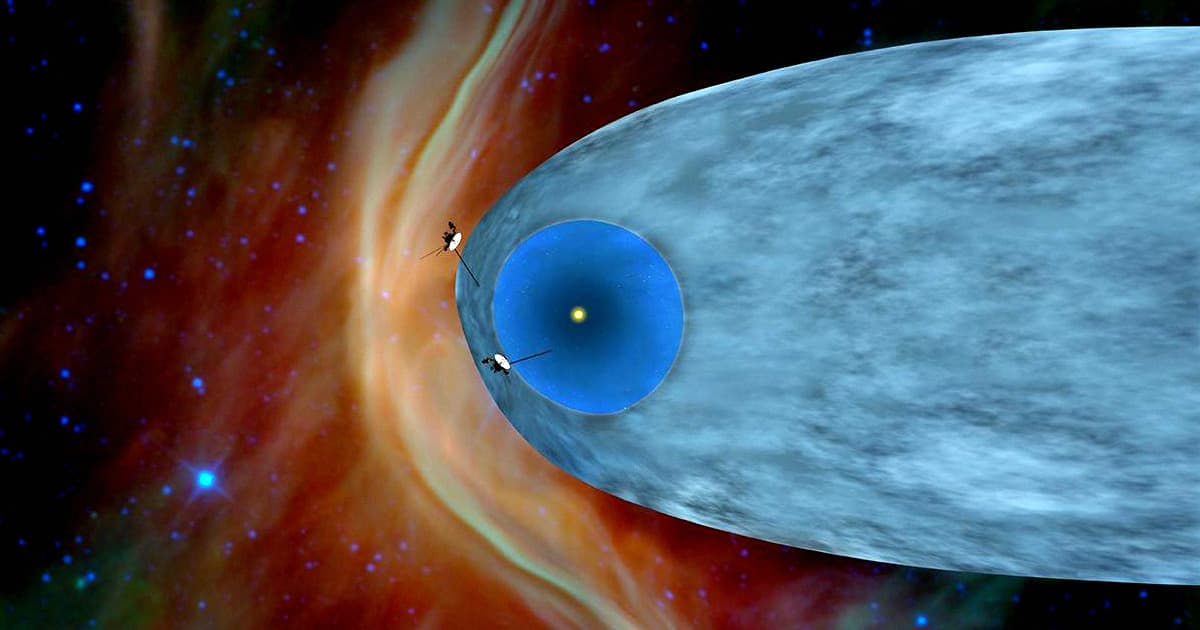 Almost a decade ago, NASA's Voyager 1 spacecraft left the outer edge of our Solar System to enter interstellar space.

It marked the first time a spacecraft had ever done so, a culmination of almost 35 years of traveling through space.

Now, researchers are digging through all the fascinating data from it that's making its way back to Earth — and they've found something strange: a background "hum" beyond the edge of our solar system.

"We're detecting the faint, persistent hum of interstellar gas," Stella Koch Ocker, Cornell doctoral student in astronomy and lead author of a new paper published in Nature Astronomy, said in a statement. "It's very faint and monotone, because it is in a narrow frequency bandwidth."

As Voyager 1 traveled from the heliopause, the boundary between our solar system and interstellar space, into the interstellar medium, its scientific instruments detected a constant stream of plasma waves.

The insight could allow us to gain a better understanding of the shape of the heliosphere, the protective bubble around the Solar System, and how it's influenced by this constant buffeting of interstellar gas.

Voyager 1's Plasma Wave System detected a shift in the gases once it crossed the heliopause. Between bouts of strong solar eruptions caused by the Sun, there was this continuous "hum," a signature sound of interstellar gases.

"The interstellar medium is like a quiet or gentle rain," said senior author James Cordes, from the George Feldstein Professor of Astronomy, in the statement. "In the case of a solar outburst, it's like detecting a lightning burst in a thunderstorm and then it's back to a gentle rain."

It's a unique opportunity to study the density of interstellar space.

"We've never had a chance to evaluate [the density of interstellar space]," Shami Chatterjee, co-author and Cornell researcher, said. "Now we know we don't need a fortuitous event related to the sun to measure interstellar plasma."

Despite Voyager 1 being 14 billion miles away, in other  words, scientists are still able to get tantalizing glances of what space is like outside of our own home star system.

More on Voyager: New Voyager Readings: Space Is Much Denser Outside Solar System

Read This Next
Far Out
Voyager 2 Just Entered Interstellar Space
More on Hard Science
Tractor Beam
Thursday on the byte
Scientists Build Working Tractor Beam, Although It's Comically Tiny
Having a Blast
Jan 18 on the byte
New Study Shows Where You Should Hide to Survive a Nuclear Attack
Offworld Amino
Jan 15 on the byte
Scientists Find Building Blocks of Life in Meteor That Smashed Into Family's Driveway
READ MORE STORIES ABOUT / Hard Science
Keep up.
Subscribe to our daily newsletter to keep in touch with the subjects shaping our future.
+Social+Newsletter
TopicsAbout UsContact Us
Copyright ©, Camden Media Inc All Rights Reserved. See our User Agreement, Privacy Policy and Data Use Policy. The material on this site may not be reproduced, distributed, transmitted, cached or otherwise used, except with prior written permission of Futurism. Articles may contain affiliate links which enable us to share in the revenue of any purchases made.
Fonts by Typekit and Monotype.