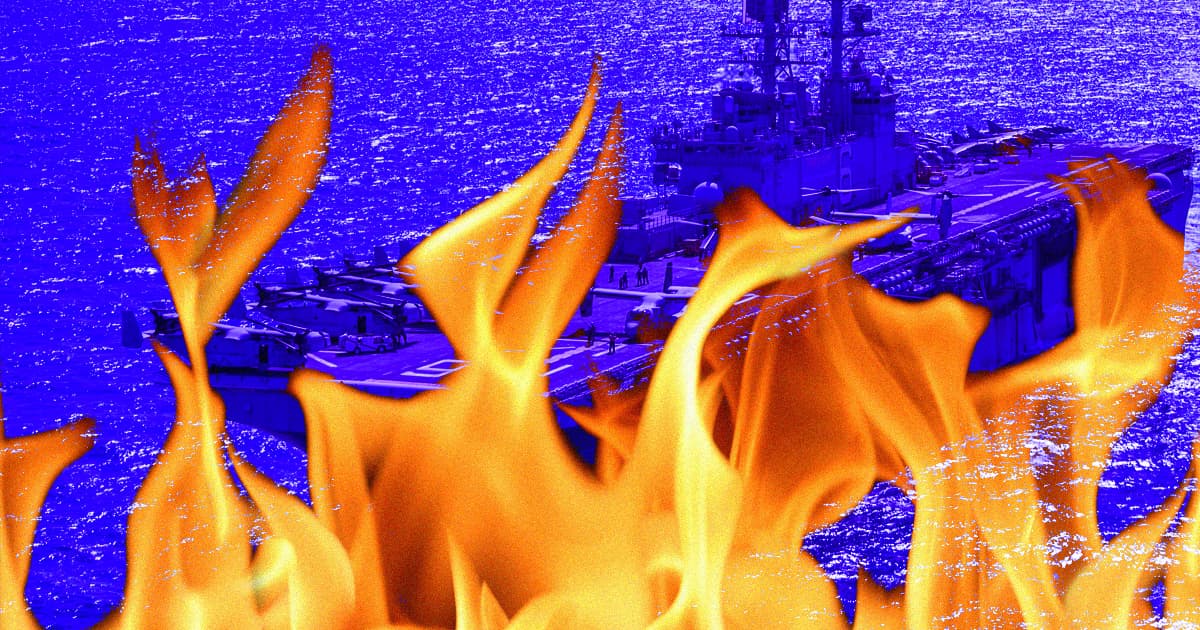 That's one way to rage quit.

That's one way to rage quit.

For many gamers out there, rage quitting has often involved throwing a console controller on the ground or swearing into a headset. But when you're in the Navy, the stakes are a little higher.

Take Ryan Sawyer Mays, a 20-year-old sailor who failed his US Navy SEAL test and then allegedly set fire to a $1.2 billion amphibious assault ship, costing the Navy $30 million in damage, The Daily Beast reports.

According to documents obtained by the Beast, Mays is accused of lighting up the USS Bonhomme Richard, a 40,000-ton, 843-foot assault vessel, in July 2020.

The fire burned for nearly five days and injured dozens of sailors who attempted to extinguish the massive flames, according to the BBC. The ship was also subsequently scrapped, though it's unclear whether Mays' damage had anything to do with that.

The US Naval Criminal Investigative Service (NCIS) interviewed 177 sailors who were assigned to the ship at the time. One sailor reported to have seen a person in overalls and a face mask carrying a mysterious bucket into a lower level at the rear of the ship.

The sailor later affirmed that he was "fairly sure" it was Mays, according to the Beast, noting that he had also said that he "hates" the US Navy. The interviewed sailor also suspected it was Mays because he heard him say "I love deck," a phrase he apparently said often.

Mays was reportedly frustrated after being reassigned to the ship as an "undesignated Seaman" despite wanting to become a Navy SEAL.

"According to Navy leadership, the morale and behavior of sailors who had aspired to become a SEAL, and then find themselves serving in a more traditional role on a Navy ship, are frequently very challenging," a search warrant affidavit reads, as quoted by The Daily Beast.

The USS Bonhomme Richard will be scrapped, according to a November statement by the Navy due to estimated repair costs tallying up to $3.2 billion — more than twice the amount the ship cost to build back in 1998.

More on the Navy: The Navy Says Its Nuclear Submarines Are Beat Up Pieces of Crap

Look at That Thing
Navy Pilot Describes Bizzare "Tic Tac" UFO Encounter He Filmed
12. 20. 19
Read More
Loose Lips
US Navy Struggling to Deal With an Onslaught of Hackers
3. 13. 19
Read More
Stem Ware
Scientists Discover World's Oldest Preserved Vertebrate Brain
Yesterday
Read More
+Social+Newsletter
TopicsAbout UsContact Us
Copyright ©, Camden Media Inc All Rights Reserved. See our User Agreement, Privacy Policy and Data Use Policy. The material on this site may not be reproduced, distributed, transmitted, cached or otherwise used, except with prior written permission of Futurism. Articles may contain affiliate links which enable us to share in the revenue of any purchases made.
Fonts by Typekit and Monotype.