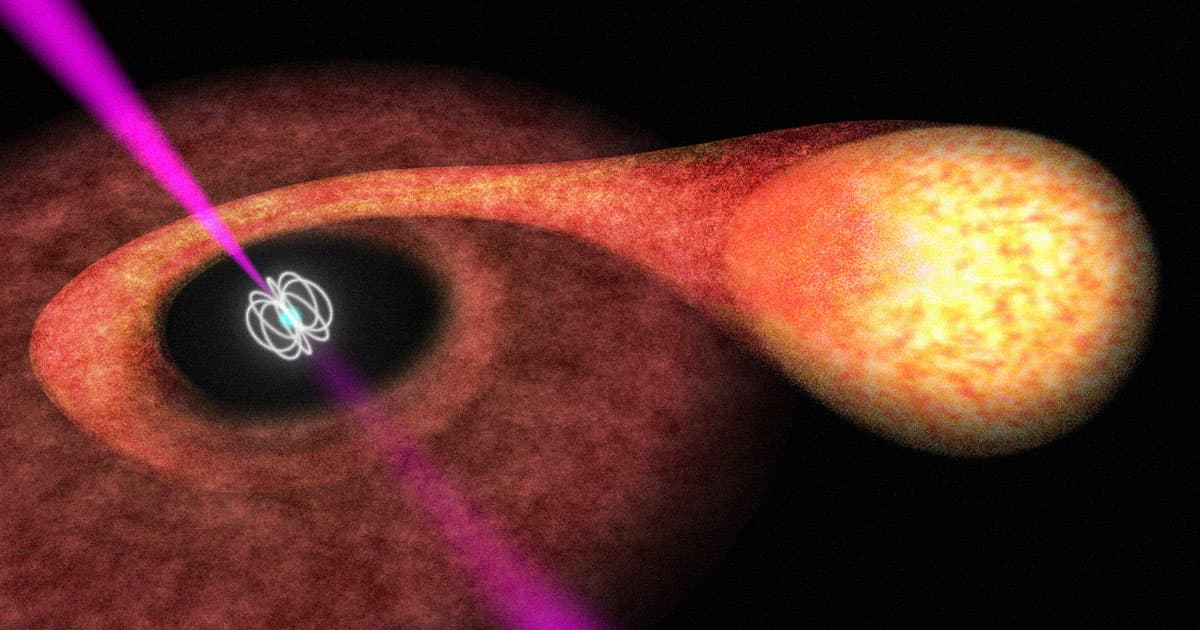 They call it a "black widow" pulsar, and it's hungry.

They call it a "black widow" pulsar, and it's hungry.

Die In the Sky

Watch out, because this thing eats entire stellar masses: a rapidly rotating collapsed star known as a pulsar is making a meal out of its neighboring star, nearly devouring it whole.

Neutron stars are some of the densest objects in the Universe — so dense that, in one case, just a sugar cube-sized piece of one would weigh 100 million tons. They form when a much larger star collapses in on itself during a supernova. In the aftermath, a neutron star may end up spinning rapidly — 707 times per second, in this case — which makes it a pulsar.

Turns out this pulsar, designated PSR J0952-0607, was pretty hungry. It’s what’s known as a "black widow" pulsar, a reference to how female black widow spiders eat the companion male after mating. If a pulsar and another star drift too close, the ridiculously concentrated gravity of the pulsar shreds the unsuspecting neighbor to bits, siphoning its mass.

"We know roughly how matter behaves at nuclear densities, like in the nucleus of a uranium atom," said one of the study's authors Alex Filippenko, a professor of astronomy at UC Berkeley, in a press release. "A neutron star is like one giant nucleus, but when you have one-and-a-half solar masses of this stuff, which is about 500,000 Earth masses of nuclei all clinging together, it’s not at all clear how they will behave."

The scientists hope that by observing these "black widow" pulsars, they can determine just how large neutron stars can be, and what's happening at the quantum level.

More on stars: Scientists Predict That The Solar System Could Collapse If a Star Flew Too Close