"It's in our galactic backyard." 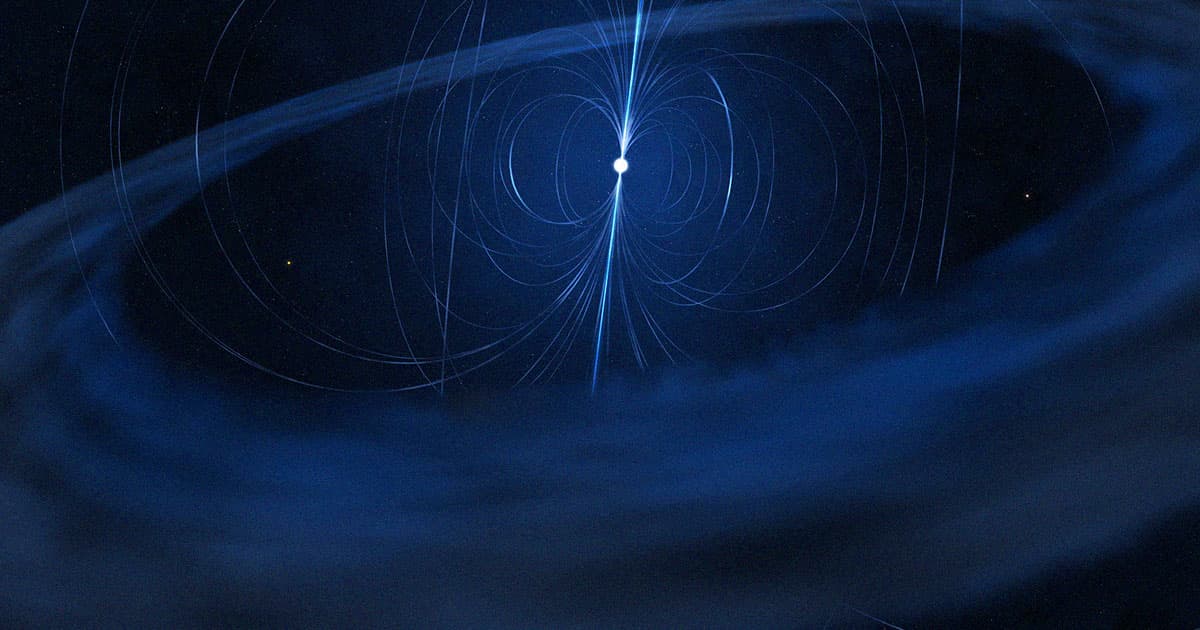 Astronomers are flummoxed by a mysterious celestial object that appears to be releasing massive bursts of energy at regular 18 minute intervals.

Like a lighthouse, the beacon is sending out radiation three times an hour at such an intensity that it's one of the brightest points in the sky — and, researchers say, it could turn out to be an entirely new class of celestial object.

A team, led by astrophysicist Natasha Hurley-Walker from the International Centre for Radio Astronomy Research, had a closer look at the object after it was discovered by Curtin University student Tyrone O'Doherty, who used the Murchison Widefield Array (MWA) telescope in outback Western Australia.

"This object was appearing and disappearing over a few hours during our observations," Hurley-Walker said in a statement. "That was completely unexpected. It was kind of spooky for an astronomer because there's nothing known in the sky that does that."

Even more intriguing is its distance from us.

"And it's really quite close to us," she added, "about 4,000 lightyears away. It's in our galactic backyard."

And no, before you get excited, "it's definitely not aliens," the astrophysicist told The Guardian. That's because it is releasing an astronomical amount of radiation across a huge breadth of the frequency spectrum, requiring huge amounts of energy to produce, the team found.

We've spotted these kinds of objects, dubbed "transients," before — but this one is of particular interest thanks to its extremely fast flicking on and off. Usually transients appear over a few days and then disappear for months at a time — "slow transients." Or they turn on and off within just milliseconds.

This object's unusual brightness led the researchers to believe they were looking at an object with an extremely strong magnetic field. In a new study published in the reputable journal Nature this week, the team suggests it could be a "ultra-long-period magnetar."

"It's a type of slowly spinning neutron star that has been predicted to exist theoretically," Hurley-Walker said in the statement. Neutron stars are the dead and extremely dense remains of a star.

"But nobody expected to directly detect one like this because we didn't expect them to be so bright," she went on. "Somehow it's converting magnetic energy to radio waves much more effectively than anything we've seen before."

The team is now hoping to catch the object again using the MWA.

"More detections will tell astronomers whether this was a rare one-off event or a vast new population we'd never noticed before," Hurley-Walker said.

READ MORE: Mysterious object unlike anything astronomers have seen before [International Centre for Radio Astronomy Research]

More on magnetars: A Dead Star Gave Off Something Scientists Have Never Seen Before

Read This Next
BUUURP
Astronomers Pinpoint Source of Mysterious Radio Burst Signal
Not a Neutron Star, Not Yet a Black Hole
Astronomers May Have Discovered First-Ever "Black Neutron Star"
Futurism
Scientists Detect Powerful Radio Burst Coming From Our Own Galaxy
Positron Electron
Neutron Star's "Halo" Could Help Solve Antimatter Mystery
Futurism
Astronomers Baffled by Wind Nebula Around Insanely Magnetic Star
More on Hard Science
Tractor Beam
Yesterday on the byte
Scientists Build Working Tractor Beam, Although It's Comically Tiny
Having a Blast
Jan 18 on the byte
New Study Shows Where You Should Hide to Survive a Nuclear Attack
Offworld Amino
Jan 15 on the byte
Scientists Find Building Blocks of Life in Meteor That Smashed Into Family's Driveway
READ MORE STORIES ABOUT / Hard Science
Keep up.
Subscribe to our daily newsletter to keep in touch with the subjects shaping our future.
+Social+Newsletter
TopicsAbout UsContact Us
Copyright ©, Camden Media Inc All Rights Reserved. See our User Agreement, Privacy Policy and Data Use Policy. The material on this site may not be reproduced, distributed, transmitted, cached or otherwise used, except with prior written permission of Futurism. Articles may contain affiliate links which enable us to share in the revenue of any purchases made.
Fonts by Typekit and Monotype.