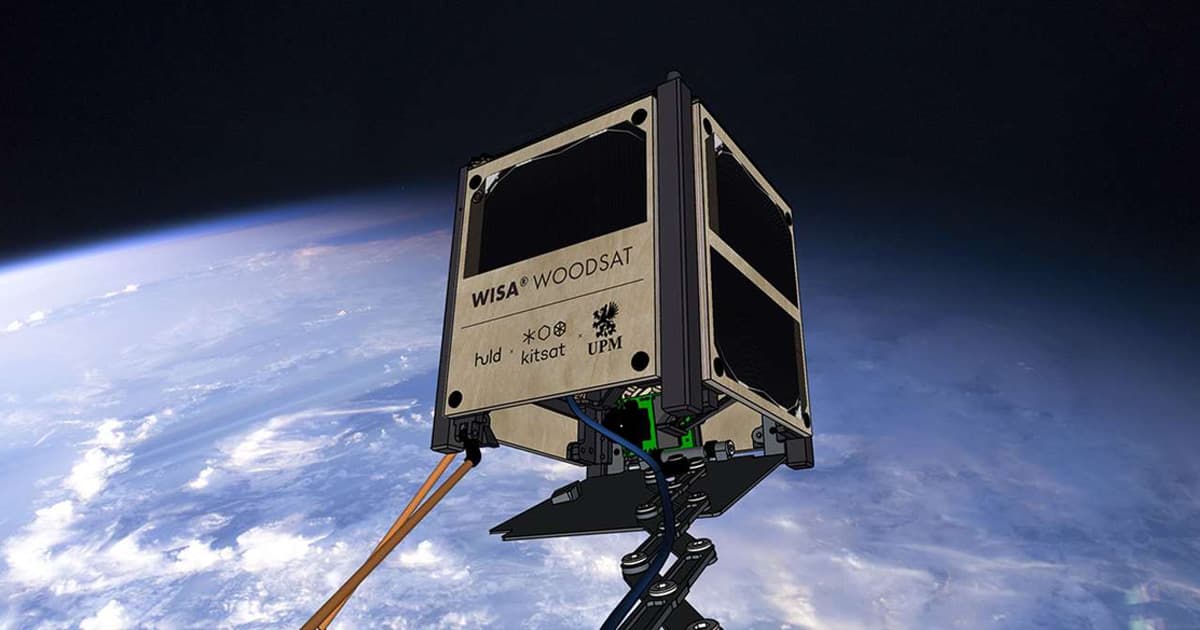 It's made out of plywood.

It's made out of plywood.

The world's first satellite primarily made out of wood is set to launch later this year, and it's bringing a selfie stick to mark the occasion, Defense One reports.

The WISA Woodsat, a collaboration between Finnish cubesat startup Arctic Astronautics and the European Space Agency, features an outer shell made out of birch-plywood, a material surprisingly resilient to the harsh environment of outer space.

On July 9 the ESA certified the tiny wooden cube for flight, and it's now set to launch aboard Rocket Lab's Electron rocket later this year in an exciting new development in the history of satellite technology, which has traditionally relied on aluminum and its alloys. Wood would also make the satellite far more likely to burn up completely upon reentry, ensuring it won't be adding to our considerable space junk problem.

The idea for the wooden invention goes way back.

"I started half-seriously to think about wooden satellite(s), because I've been doing wooden aircraft models, have been flying ‘real’ planes made of wood, and I have been involved with space technology since [the] 1990s," Arctic Astronautics chief strategy officer Jari Mäkinen told Defense One. "I felt that wood might be a good material, especially plywood."

In a preliminary test, the company sent up a test flight balloon with a cubesat-sized box made out of birch and birch plywood. The material held up "surprisingly well" in the upper atmosphere, according to Mäkinen.

It's not the only company designing wooden satellites. Japanese firm Sumitomo Forestry announced a collaboration with Kyoto University in December to launch the first-ever wooden satellite into space some time in 2023 — which only motivated the Finnish startup to work even harder, according to Defense One.

The WISA cubesat does feature light metal plates on the interior to hold its electronics in place, but even these components are designed to burn up upon reentry, leaving no trace behind.

The company expects the tiny satellite to release vapors as it is being bombarded by corrosive atomic oxygen in orbit. A small camera will record this slow decay.

The team is hoping the cubesat will survive for two years, an impressive feat for a box made out of plywood.

X-Ray Vision
A New Satellite Can Peer Inside Some Buildings, Day or Night
12. 16. 20
Read More
Space Pirates
SpaceX Is Launching a Fleet of Pirate-Hunting Satellites
7. 17. 20
Read More
Playing Chicken
SpaceX Wouldn't Move Its Satellite to Avoid a Collision, Says ESA
9. 3. 19
Read More
+Social+Newsletter
TopicsAbout UsContact Us
Copyright ©, Camden Media Inc All Rights Reserved. See our User Agreement, Privacy Policy and Data Use Policy. The material on this site may not be reproduced, distributed, transmitted, cached or otherwise used, except with prior written permission of Futurism. Articles may contain affiliate links which enable us to share in the revenue of any purchases made.
Fonts by Typekit and Monotype.