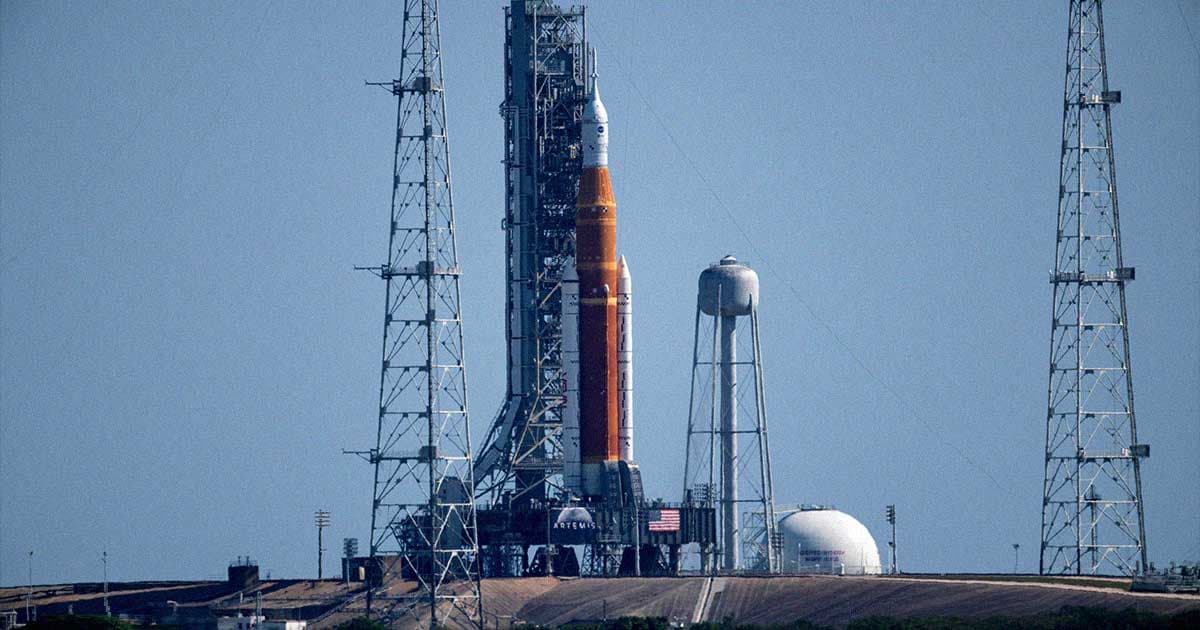 Will this thing ever make it off the ground?!

Will this thing ever make it off the ground?!

During a crucial test over the weekend, NASA's long delayed, ultra-expensive Space Launch System (SLS) sprang a leak in a hydrogen fuel valve. This was the fourth try at what NASA calls a "wet dress" rehearsal for the Artemis 1 mission, of which the previous three attempts were considered failures due to other fueling issues.

Despite this most recent fuel fiasco — which caused Artemis personnel to cut the simulated launch short by about 20 seconds — this latest test was marked as a success.

But while most major test goals were met, others weren't, again leaving serious questions about SLS' viability and the Artemis 1 mission's timeline.

"I would say that the majority of our objectives were met," said Charlie Blackwell-Thompson, NASA's Artemis launch director, during a post-test press conference. "There were maybe small pieces within that one primary objective that we came up a little short on."

The wet dress rehearsal is one of the final tests needed to clear a rocket for its maiden voyage, and NASA seems eager to get the colossal SLS spacecraft — originally slated to launch back in February 2022 — into the Moon's orbit.

After, NASA is still playing things pretty close to the vest with regards to the current Artemis 1 timetable.

"I don’t think we know yet," said Tom Whitmeyer, NASA’s deputy associate administrator for common exploration systems, when asked about the Artemis schedule during the same post-simulation briefing.

This seems to be the theme of the upcoming Artemis Moon missions, which recently leaked NASA documents suggest might be in general chaos overall.

Regardless, the Artemis 1 launch team appears to remain in good spirits.

"It's a great day for our team," said Blackwell-Thompson, during NASA's live wet dress webcast. "Definitely a good day for us and a very exciting day as well."

Putting Things In Perspective
Amazing Artemis Photo Shows Every Human, Alive or Dead, Plus the Moon
Nov 29
Read More
Mo' Money Mo' Problems
New Government Report Is Extremely Bad News for NASA
Sep 9
Read More
Classified
Here's What the Former Head of NASA Has to Say About the Moon Mission Delay
Sep 2
Read More
+Social+Newsletter
TopicsAbout UsContact Us
Copyright ©, Camden Media Inc All Rights Reserved. See our User Agreement, Privacy Policy and Data Use Policy. The material on this site may not be reproduced, distributed, transmitted, cached or otherwise used, except with prior written permission of Futurism. Articles may contain affiliate links which enable us to share in the revenue of any purchases made.
Fonts by Typekit and Monotype.