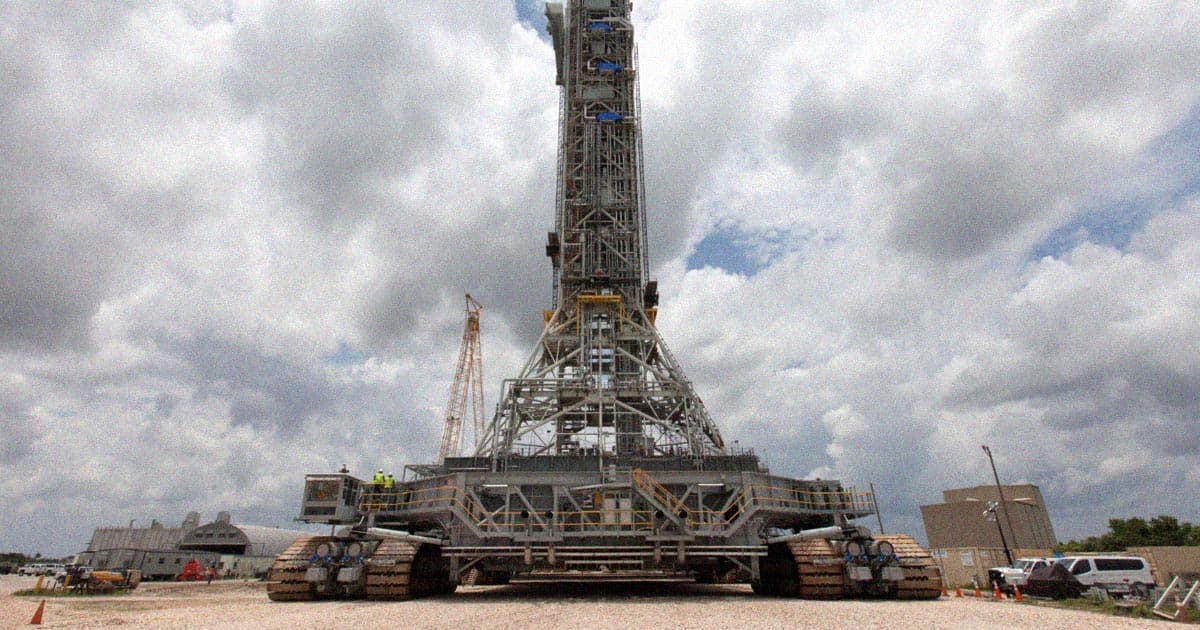 NASA's Office of Inspector General (OIG) has released the final audit of the agency's efforts to build the Mobile Launcher 2 (ML-2), a massive tower meant to facilitate the launch of crewed missions to the lunar surface — and it spells bad news for the space agency.

According to the scathing report — which many at the agency have been bracing themselves for — NASA's contract with tower builder Bechtel has been an absolute disaster, with the agency spending "approximately a billion dollars or at least 2.5 times more than initially planned."

Delivery of the tower will also "take at least 2.5 years longer than initially planned." That means Artemis IV, the program's inaugural crewed mission to the lunar surface, could be set back to the end of 2028, according to an analysis by the office's Independent Review Team.

That's a pretty hefty setback, especially considering the ML-2 was meant to be delivered in March 2023, according to NASA's original contract with Bechtel.

It's an unfortunate conundrum that could greatly delay the country's return to the Moon. The Trump administration had been selling Congress on the idea of returning astronauts to the Moon by 2024, for perspective.

But that date has consistently slipped, with costs ballooning to astronomical levels. NASA's Moon rocket, the Space Launch System (SLS), has also been infamously mired in massive budget overruns and years of delays.

Now, even just the ML-2 tower alone, a platform meant to facilitate the launch of two special configurations of the SLS — Block 1B and Block 2 — capable of sending heavy cargo and astronauts to the lunar surface, is proving to be quite the disaster, according to the new report.

NASA's first Mobile Launcher was designed in such a way that doesn't allow for the launch of these configurations and won't prove very useful for crewed launches.

The OIG isn't pulling any punches and is ready to dish out the blame. The delays and budget overruns involved in the development of the tower "can be attributed primarily to Bechtel’s poor performance on the contract," the report reads.

But NASA is also to blame for awarding the contractor almost half of the $16.8 million in award fees, according to the report, despite Bechtel's horrendous performance.

The Inspector General therefore recommends that NASA do its due diligence and make sure cost estimates are accurate and well established before it enters "any new contractual agreements." And award fees should also only been given out only with a well documented rationale in hand.

NASA finds itself in an unfortunate predicament — and the whole world is watching.

More on the report:  Something Very Bad Might Be About to Go Down at NASA

Read This Next
Putting Things In Perspective
Amazing Artemis Photo Shows Every Human, Alive or Dead, Plus the Moon
Fighting Words
Retired NASA Astronaut Scott Kelly Dishes on Ukraine, Russia, and Moon Mission
Psychological Warfare
Experts Excoriate NASA Report Claiming James Webb Wasn't Homophobic
Big Impact
Meteorite Hit Mars So Hard NASA Thought It Was a Quake
Failure to Launch
Lawsuit Accuses NASA of Widespread Racial Discrimination
More on Off World
Lunar RGB
Yesterday on the byte
NASA Shows Off Artemis "Party Mode," Powered by Amazon (TM) Alexa (TM)
Love It or List It
Tuesday on the byte
NASA Hires Company to 3D Print American Base on the Moon
Shine Bright
Tuesday on the byte
Astronomers Annoyed at Ludicrously Bright SpaceX-Launched Satellite
READ MORE STORIES ABOUT / Off World
Keep up.
Subscribe to our daily newsletter to keep in touch with the subjects shaping our future.
+Social+Newsletter
TopicsAbout UsContact Us
Copyright ©, Camden Media Inc All Rights Reserved. See our User Agreement, Privacy Policy and Data Use Policy. The material on this site may not be reproduced, distributed, transmitted, cached or otherwise used, except with prior written permission of Futurism. Articles may contain affiliate links which enable us to share in the revenue of any purchases made.
Fonts by Typekit and Monotype.