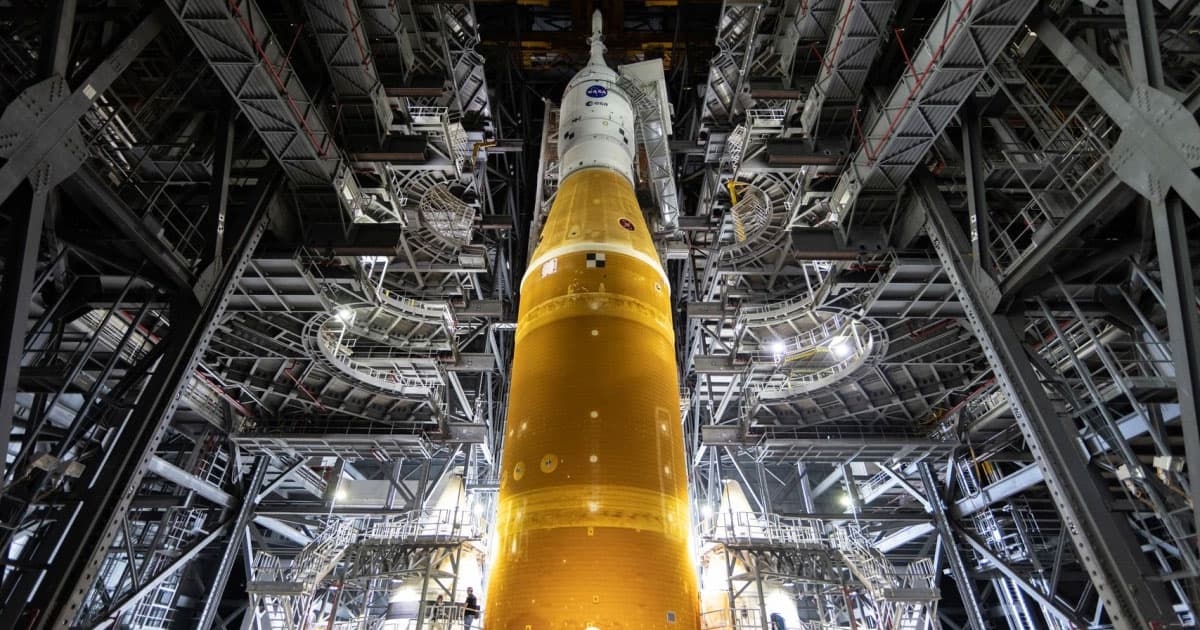 NASA is finally ready to roll out the rocket designed to land the first astronauts on the Moon since the 1970s.

It's a momentous occasion for a heavy launch system that has been stuck in development hell and "billions over budget and years behind schedule," as NASA inspector general Paul Martin put it during a conference call earlier this month.

The Space Launch System (SLS), paired with the agency's Orion spacecraft, is making its way to historic launch pad 39B at the Kennedy Space Center in Florida where it will undergo further tests — but we'll have to be patient as it's not destined to launch any time soon.

A webcast of the rollout will l go live at 5 pm Eastern time.

For its rollout later today, the rocket will make use of a gigantic crawler-transporter called CT-2 that alone weighs 6.6 million pounds, a veteran piece of machinery that has been in use for over half a century.

It's not exactly going to be screaming along, moving the massive 322-foot rocket tower at a glacial 0.8 mph.

The megarocket's first mission will be Artemis I, which will only attempt to send an uncrewed rocket around the Moon.

Once at the launch pad, team members will load fuel into the SLS and do a "wet dress rehearsal" of the countdown, currently slated for April 3.

Unfortunately, we'll have to wait longer to see NASA light its gargantuan candle. After the rehearsal, the rocket will be rolled right back to where it started today for more tests, as Space.com points out.

Artemis I, scheduled for May of this year, is expected to take 26 days and will see the Orion spacecraft travel beyond the Moon before making its eventual return to Earth.

The subsequent Artemis II mission is set to launch in 2024 — if all goes well — and take a crew around the Moon and back.

The first crewed mission to the lunar surface, Artemis III, is slated for 2025, although that date could well be pushed back.

READ MORE: NASA's Artemis 1 moon megarocket rolls out to the launch pad today and you can watch it live [Spacce.com]

More on SLS: NASA Descends Into Chaos as Moon Program Revealed to Be Way Behind, Over Budget