Meet the 24-Year-Old Who Drives NASA Rockets to the Launch Pad in a 6.5 Million Pound Crawler 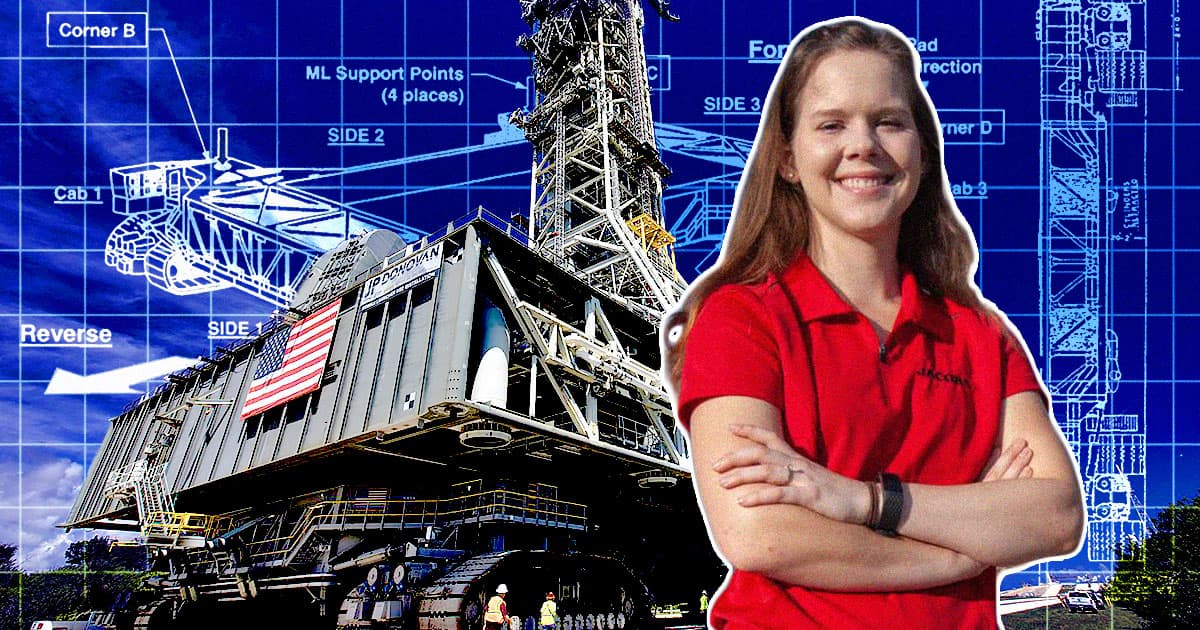 Rockets don’t just spawn on the launch pad. You know this, even if sometimes it seems like the behemoths that launch explorations to space spontaneously line up, ready to blast off. After all, what machine on Earth is even capable of hauling skyscraper-sized structures over solid ground?

Ask Breanne Rohloff — she’s an engineer for NASA contractor Jacobs, who moves rockets around at NASA’s Kennedy Space Center. Her machine is a 6.5 million pound beast called a crawler transporter. It rides a bit like an army tank, has the width of a baseball infield, and trundles at a glacial pace of less than a mile per hour.

The crawlers date back to the Apollo era, when they were constructed to haul the rockets that brought the first humans to the Moon. Over 50 years later, they’ll transport NASA’s Space Launch System (SLS) rocket and the Orion spacecraft to the launch pad, which if all goes according to plan will kick off NASA’s Artemis mission and eventually launch a crew that will mark humanity’s return to the lunar surface.

But before that happens, crawler drivers like Rohloff will spend countless hours maintaining and preparing the storied machines for their big day. And the SLS won’t be the first nor the last giant load to ride what Rohloff calls “the Space Center’s Uber for rockets.”

This interview has been condensed and edited for clarity.

Could you tell me a little bit about your background and how you came into this job?

I got really interested in space when I was young, just watching shuttle launches on the TV — it felt like astronauts were superheroes. And then that interest just kind of grew as I went through school. I went to the University of Central Florida for engineering, had an internship at the Kennedy Space Center while I was in school and I fell in love with it. Then I came out here to work on the crawler about two and a half years ago when I graduated.

So is this the first job that you've had out of college?

It is, yeah. It's the first full-time position I've had.

Did you anticipate that you would be doing something with the crawlers, specifically? Or were you just kind of open to anything?

I was open to a lot, you know, with the nerves of being out of school and thinking, I have to get a job, what am I going to do? But I was really hoping to come back to the Space Center. I'd worked with the crawler in my internship, and I was really interested and hoping to work with them, and got really fortunate when it worked out.

Is there such thing as a typical day at this job? Could you walk me through what you normally do during a shift?

What we do normally on a day-to-day basis is a lot of maintenance. So we're doing preventative maintenance to make sure all of our systems are up and running. If we notice anything, we'll have some corrective maintenance that we complete to be sure that we're ready to support any operations.

Could you take me back to what it was like when you first started? What do you remember from driving the crawler the first time?

I had been on crawler moves before I started out here. So when I first drove I was a little bit nervous to be the one with the hands on the steering wheel, but I just felt really excited. I was trying to look at everything that I needed to, and I had someone in there training with me. But yeah, it was really exciting. And a little bit awe-inspiring to be like, this thing weighs 6 million pounds, and now I'm at the steering wheel.

I think I went home and I told my mom, “I got to touch the steering wheel today.” It’s a little dorky, but I'll admit to it.

I mean, it sounds exciting. It's not something that most people ever get the chance to do. I'm kind of wondering what it's like to drive a crawler, compared to driving a regular car or truck?

The front right corner is where the cab is; it's not in the middle. And so we've got one of our four  sets of tracks directly below us, and one behind us. So a lot of times we're checking where our front tracks are looking in reference to the front of the crawlerway ahead of us. And we're also looking behind us to see how our rear tracks are tracking. Because the crawler steers from the middle, but we're driving from the front right.

Why do you have to keep such a close eye on those tracks?

We steer in degrees. We can only steer up to six degrees in one direction. So you're keeping a close eye to make sure that when you want to be going straight, you're actually going straight and not at an angle. And you're making tiny little corrections, but you're also keeping a really close eye on the tracks when you're going into a curve. You have to be anticipating your next moves so that the crawler has time to correct and time to react to where you want it to go.

So when you're moving rockets to the launch pad, how far of a distance are you typically going? And how long does that take?

From the Vehicle Assembly Building where everything's stacked and put together to the launch pad, it's about a four mile journey, give or take.

There's a lot of front end work and a lot of back end work that we are involved with: going in picking up the stack, putting it down at the launch pad and then backing up, because we don’t stay parked there. We leave the launch pad when we finish moving everything.

Just the move itself will take about a whole 8-hour shift.

And for you specifically, you're mostly just doing that middle part where you're moving, things, you're not assembling?

We’ll be involved picking up the stack and putting it down — we’ll be there on both sides of the operation. But our group is not the one that does the assembling of a vehicle.

Okay, so you're just kind of taking things from point A to point B.

So another thing I find interesting is that Kennedy Space Center is on a wildlife preserve and I’ve read that there are times where animals can get in the way of your vehicles. I'm kind of curious what that's like — have you had any run-ins with wildlife?

So yeah, we’re on a wildlife preserve. And that's part of why we have so many people observing as well. There’s hogs, coyotes, gators, tortoises, mice — there was a mouse in one of the crawler shoes once.

We do walk downs, and we look around before we start moving to see if there's anything we need to usher away though wildlife protection services. And if we see animals on the crawlerway, where it's more common, we create a lot of vibration when we're moving. So they can feel that in the ground and it kind of disturbs them. Usually they kind of get spooked a little and they'll walk away from where we're headed. If we need to, we would stop and have them safely moved out of the way.

That makes sense. I can imagine it's a little freaky to be on the track at the time when the crawlers are coming down anyway, just because of the vibrations, like you said.

Yeah. The crawler is big from my perspective; I kind of would be scared to see it as a turtle.

So switching gears, I know that NASA is planning to launch a massive Space Launch System rocket as part of the Artemis mission in March. With those larger loads, can you feel the difference when you're driving compared to a smaller load?

The crawler itself will react a little bit slower, and there's a lot more friction when you're steering in particular. And you're also paying a lot of attention and watching carefully how the JEL system — which is our jacking, equalizing, and leveling system — that's keeping the top surface flat. We have to go up a slope to get onto the launch pad.

We've got hydraulic cylinders on each corner, and when you go up onto the slope, the front cylinders will start lowering and the rear cylinders will be extending to keep our load level while the crawler is experiencing different angles.

I see. So the back kind of comes up so that everything feels even.

We've got limits on how high up we can go. So you're keeping an eye on that to make sure that nothing's out of whack.

Yeah, you wouldn't want to accidentally tip a rocket forward or something. I feel like that would be a bad day.

Yeah, that would be a bad day.

Is there anything that’s surprised you about driving a crawler since you started doing it?

It was hard to go straight at first. It was difficult. Same with learning the different viewpoints as I drive.

It was difficult because you’re standing and everybody's different heights. So everybody's viewpoints are slightly different based on their perspective. For me, I'm kind of short and I work with some very tall men. So they're trying to tell me, you look at this hose and it should be right on top of this grass line and I'm looking at it like, this is two feet in the grass line, what are you doing? It took me a second to translate that, for him, right on top of the grass line is six inches for me inside the grass line. I'm just too short to see it.

How tall are you?