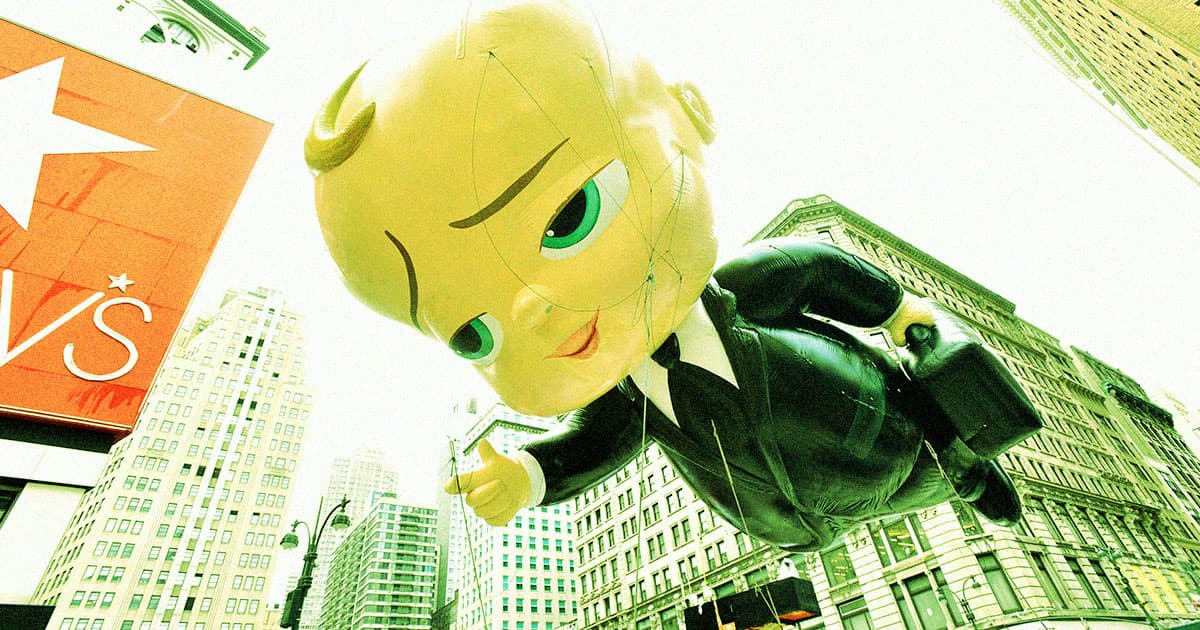 You wouldn't tokenize a parade float.

You wouldn't tokenize a parade float.

Macy’s announced ahead of this year’s Turkey Day that it’s releasing digital reproductions of some of its iconic Thanksgiving Parade floats as non-fungible tokens (NFTs) in the name of charity — and, we presume, because nothing matters anymore.

First reported by Business Insider, this logical endpoint of all things crapitalism is being split up into three categories — “classic, rare, and ultra rare” — with 10 of the most unique “floats” being auctioned off on the Sweet NFT platform and 100 percent of the proceeds going to the Make-A-Wish Foundation.

The charitable aspect is, perhaps, the only redeeming quality of this publicity stunt. Macy’s is touting that, along with the Polygon blockchain-based Sweet platform, it’s minted a special “smart contract” on each of its NFTs that will automatically donate 10 percent of every resold image to Make-A-Wish in perpetuity.

Macy’s is turning some of its Thanksgiving Day parade balloons into NFTs, or nonfungible tokens, as it tries to bring the event to a new generation of consumers #WSJWhatsNow pic.twitter.com/tW9e5tMQYG

Along with the 10 “ultra rare” reproductions of past floats, Macy’s is also releasing an additional 9,500 NFTs on Thanksgiving Day for free, with the aforementioned reselling caveat.

As BI reported, the Macy’s NFTs were designed by the Reometry digital agency, which is led by artists Seth Brown and REO, hence the name. In one sense, the way they’ve gone about these designs — showcasing not just floats that will be in this year’s 95th Macy’s Thanksgiving Parade but also past floats — is a fairly interesting exploration of digital art.

Not that we’re praising this project or its artists too much.

Take, for example, this description from another REO NFT, the title of which — “You’ll Never Find Someone Who Won’t Hurt You” — contains a double negative as infuriating as its description:

“This was inspired by a voice in my head during a monumental trip,” the artist wrote. “A very real truth I had been avoiding and needed to hear. When I posted it, it caused a deep conversation in the comment section of my instagram. Half of the people were like take this down it’s promoting hate and others completely understood what it really meant. I’m excited for this piece to be my first on foundation.”

The artist sold that NFT for the Ethereum equivalent of $6,500, and the REO-codesigned 1950s Spaceman float is bidding highest among the Macy’s NFTs at $5,200 and the bidding closes on November 30.

So if you want to spend thousands of dollars on a GIF of a Thanksgiving Parade float with a little person walking underneath who looks deceptively like a character from Nickelodeon’s mid-aught’s classic “Jimmy Neutron” designed by an artist who ripped off the “Be Here Now” aesthetic, now’s your chance.

More on NFTs: The US Government Says These NFTs Are Now Illegal

Even more NFT cringe: Watch Post Malone Buy An NFT While We Slowly Chart Our Descent Into Hell