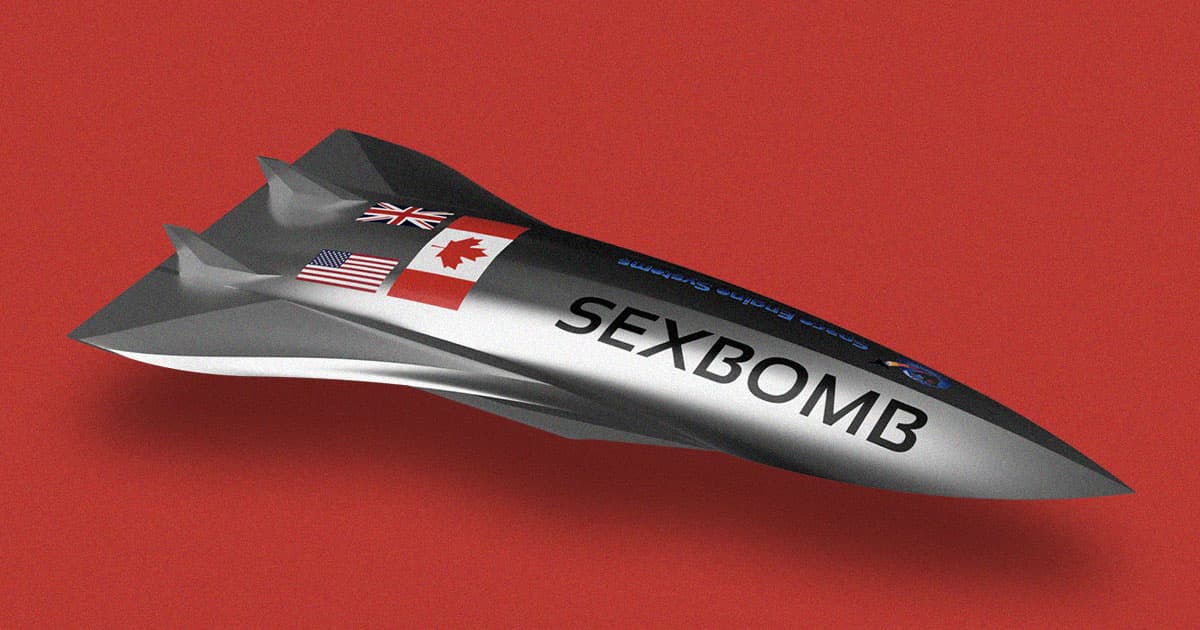 New Hypersonic Space Plane Is Called the "Sexbomb" for Some Reason

A Canadian aerospace company has chosen an eyebrow-raising name for a hypersonic space plane it plans to launch in 2022: "Sexbomb."

Space Engine Systems (SES) announced that it wants to launch the, uh, Sexbomb in Manitoba, according to a press release from the company. The vehicle will be used to test the company’s spacecraft engine prototype.

Of course, you might be wondering what's with the name. Perhaps it was inspired by Tom Jones, or maybe the employees are all just huge Scott Pilgrim fans. Or, more realistically, maybe it’s just a grabby name from Elon Musk’s meme marketing playbook.

"The kinetic energy at Mach 5 is very high," Pradeep Dass, president and CTO of the company, told Futurism. "It will act like a bomb if [it] hits anything. It is sexy, so it is a sexbomb."

The company said that the demonstration will involve Sexbomb being dropped from a giant balloon at 110,000 feet in the air. The craft will eventually fall at almost twice the speed of sound before turning on its engines and accelerating to speeds of more than 3,700 mph before landing.

The engine itself will be using a multi-fuel combustion system of "non-toxic liquid and solid propellants," according to SES’s website.

While the company had initially planned on a 2021 test, it is now expected to launch in 2022 due to the regulatory approval process, The Manitoba Post reports. SES said that it wants to launch crewed missions by 2025, though, with tickets costing a third of what it costs at other space tourism businesses.

It also hopes that hypersonic technology will open the doors to new innovations, suggesting that their vehicles could "deliver human organs for life-saving transplants from Toronto to Edmonton in 30 minutes."

Indeed, there is a lot of hype behind hypersonic tech as of late — though much of it has less to do with space travel and more to do with apocalyptically destructive weapons.

Elon Musk's Rocket Could Get You Anywhere on Earth in 60 Min. Here's What It Would Feel Like.
10. 13. 17
Read More
Virgin Galactic CEO: We'll Be Ready to Send Tourists Into Space in 2018
5. 9. 17
Read More
His Power
Scientists Develop Compound That Kills So Efficiently They Named It After Keanu Reeves
Yesterday
Read More
+Social+Newsletter
TopicsAbout UsContact Us
Copyright ©, Camden Media Inc All Rights Reserved. See our User Agreement, Privacy Policy and Data Use Policy. The material on this site may not be reproduced, distributed, transmitted, cached or otherwise used, except with prior written permission of Futurism. Articles may contain affiliate links which enable us to share in the revenue of any purchases made.
Fonts by Typekit and Monotype.