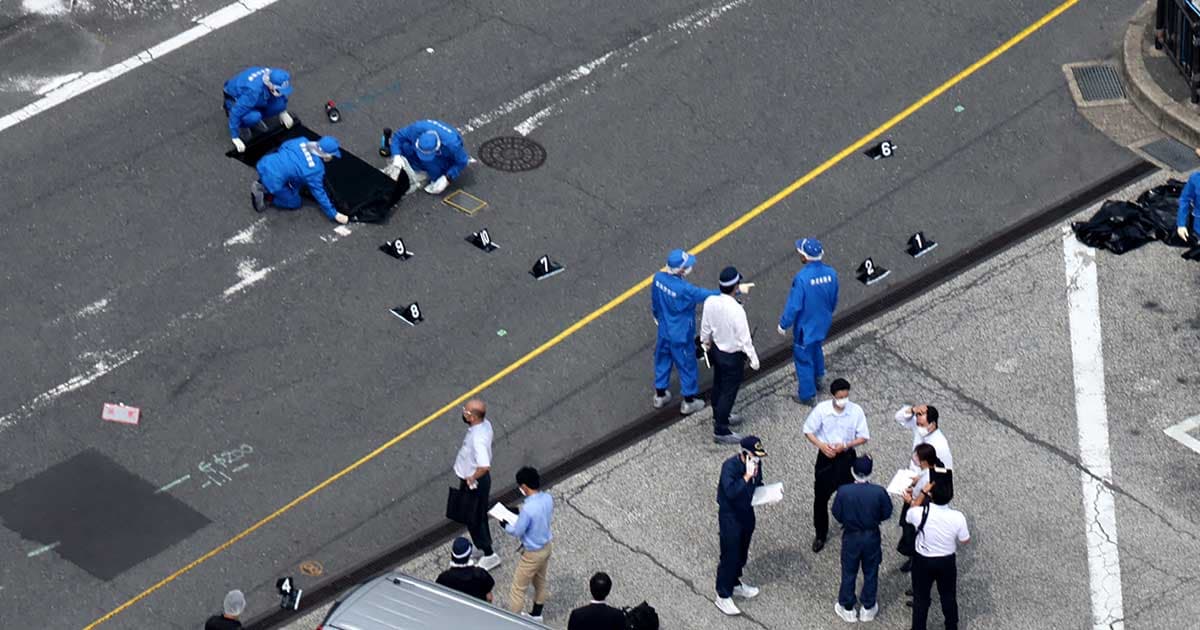 "This actually shows the extent that Japan gun laws are working."

"This actually shows the extent that Japan gun laws are working."

It's a highly unusual event — especially considering just how rare gun violence is in Japan. The country has some of the most strict gun laws in the world, requiring potential gun owners to go through extensive background checks and paperwork, including information about the owner's family, and mental health.

In other words, it's the polar opposite of the situation back here in the US, where firearms can be bought at Walmart in some states, without even needing to register them or get a permit.

To that end: The assassin may have circumvented Japan's strict gun laws by building their own shotgun. According to Bloomberg, the suspect held a device made out of two tubes wrapped together with black tape, an improvised firearm — presumably created to escape detection.

"This actually shows the extent that Japan gun laws are working," Daniel Foote, a professor at the University of Tokyo specializing in law and society, told Bloomberg. "Very few people have the ability to create such a weapon."

According to experts, the rarity of the event may have actually contributed to the fact that it was relatively easy to assassinate Abe.

"Security was obviously too loose and this will prompt a tightening up of security, especially at open-air speeches, given we’re in the middle of elections," Hiroshima Shudo University criminal law professor William Cleary told the broadcaster.

The last time a Japanese prime minster was killed was in 1932, when Tsuyoshi Inukai was famously stabbed during his tenure by Navy staff after being accused of provoking war with the US.

Abe was seen by some as a polarizing figure, as The Washington Post reports, pushing Japan to expand its military defenses during his tenure. He resigned back in 2020 due to chronic ulcreative colitis, an inflammatory bowel disease.

It's an unfortunate situation, given the fact that even with some of the strictest gun laws, people will find ways to gain access to illegal firearms. Especially with the rise of 3D-printed guns — and even rifles — we're bound to hear about more incidents like this one.

Racial Stereotyping
Researchers: Blaming Violent Video Games for Shootings is Racist
9. 18. 19
Read More
Class Warfare
Fearful Parents Are Buying Bulletproof Backpacks for Their Kids
7. 30. 19
Read More
The U.S. is No Longer the World's Largest Bitcoin Market
9. 18. 17
Read More
+Social+Newsletter
TopicsAbout UsContact Us
Copyright ©, Camden Media Inc All Rights Reserved. See our User Agreement, Privacy Policy and Data Use Policy. The material on this site may not be reproduced, distributed, transmitted, cached or otherwise used, except with prior written permission of Futurism. Articles may contain affiliate links which enable us to share in the revenue of any purchases made.
Fonts by Typekit and Monotype.