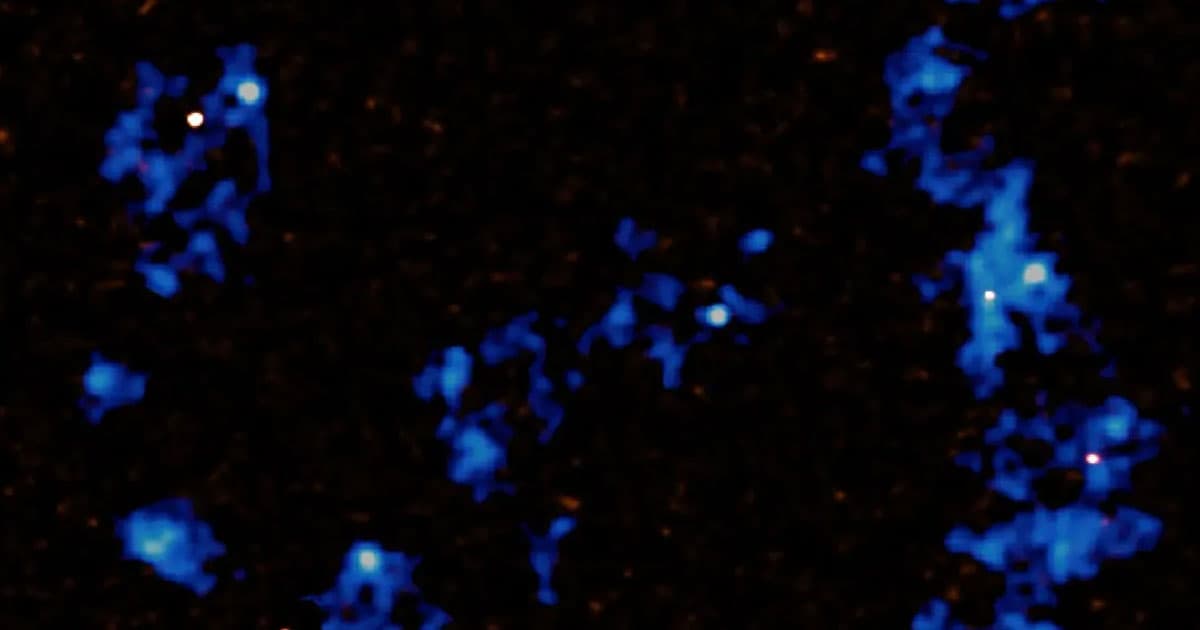 Here's the First-Ever Pic Of "Cosmic Web" Connecting All Galaxies

A huge breakthrough confirms a startling theory about the structure of the universe.

A huge breakthrough confirms a startling theory about the structure of the universe.

For the first time, scientists have directly observed something called the "cosmic web," a vast network of hydrogen channels believed to connect all the galaxies in the universe.

Astrophysicists were able to spot the cosmic megastructure lurking between galaxies 12 billion light years away in the Aquarius constellation, The Guardian reports. Not only is a landmark scientific breakthrough, but the confirmation of the web's existence lends credibility to a particular hypothesis about how galaxies came to be.

As the story goes, the Big Bang flooded the newly-formed universe with clouds of hydrogen gas that eventually collapsed into sheets and filament-shaped structures. The points at which those filaments of the cosmic web met became formation sites for galaxies that fed on the hydrogen to form stars.

This particular hypothesis has long been supported by computer simulations, but the direct observations of new galaxies forming along the cosmic web serve as much-needed tangible evidence, according to research published Thursday in the journal Science.

Before this, scientists had only spotted an occasional gas cloud extending outward from a galaxy, The Guardian reports. Finding the particularly-dim filaments themselves required the ability to filter out the rest of the light in the cosmos.

"This suggests very strongly that gas falling along the filaments under the force of gravity triggers the formation of starbursting galaxies and supermassive black holes, giving the universe the structure that we see today," lead researcher Hideki Umehata of the University of Tokyo told The Guardian.

More on space: Astrophysicists Warn That Entire Galaxies "Are Being Killed"