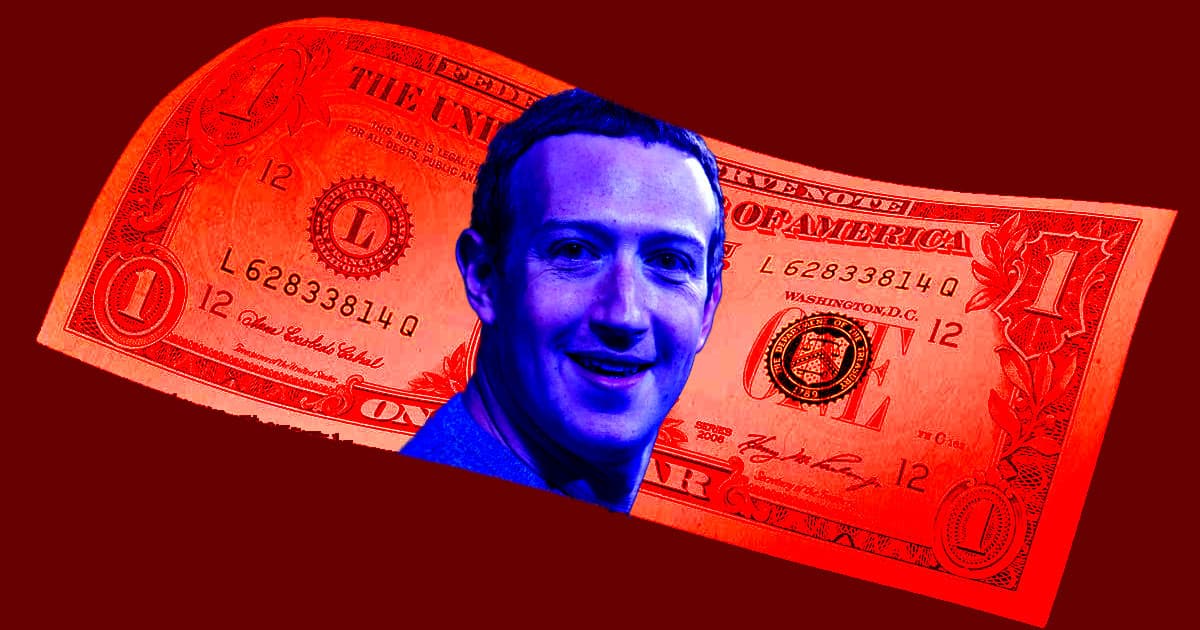 Facebook parent company Meta is looking for other ways to cash in, now that Facebook's popularity may be waning.

One effort explored by Meta's Financial Technologies team is a virtual currency for the company's metaverse, a project that's been dubbed "Zuck Bucks" by employees, the Financial Times reports, in an homage to CEO slash all-seeing overlord Mark Zuckerberg.

It's notable, considering Facebook's last efforts to develop a virtual currency called Diem backfired spectacularly after being launched in 2019, with governments around the world condemning the idea given the company's global reach and influence.

But interestingly, Meta isn't looking to base such a currency on a blockchain, as is the case for most if not all other cryptocurrencies in circulation.

Instead, the company is looking to create "social tokens" or "reputation tokens," according to FT, which could be offered as rewards to moderators or other users who make meaningful contributions to Facebook's communities.

In other words, Meta may be attempting to distance itself from having to moderate Facebook's countless communities and allow them to more effectively moderate themselves, as FT suggests.

Meta, however, hasn't given up on decentralizing some of its products. While this particular project isn't based on a blockchain, Zuckerberg confirmed the company is looking into integrating NFTs into its Instagram app "in the near term" last month.

A pilot project for NFTs on Facebook is also in the works, according to FT.

While Meta is still enormous, Facebook's user base started to shrink for the first time in the company's history back in February.

The news wiped out hundreds of billions of dollars worth of Meta shares, a sign that investors may be growing wary of the company's long term relevance.

The lackluster launch of a disappointing VR app-based sandbox called Horizon Worlds has only added to the problem.

Whether any of that will leave enough appetite for "Zuck Bucks," designed to let Facebook off the hook when it comes to content moderation — especially given its disastrous track record — remains to be seen.

More on Meta: Mark Zuckerberg Says That When Employees Call Him the "Eye of Sauron," It's Actually a Compliment