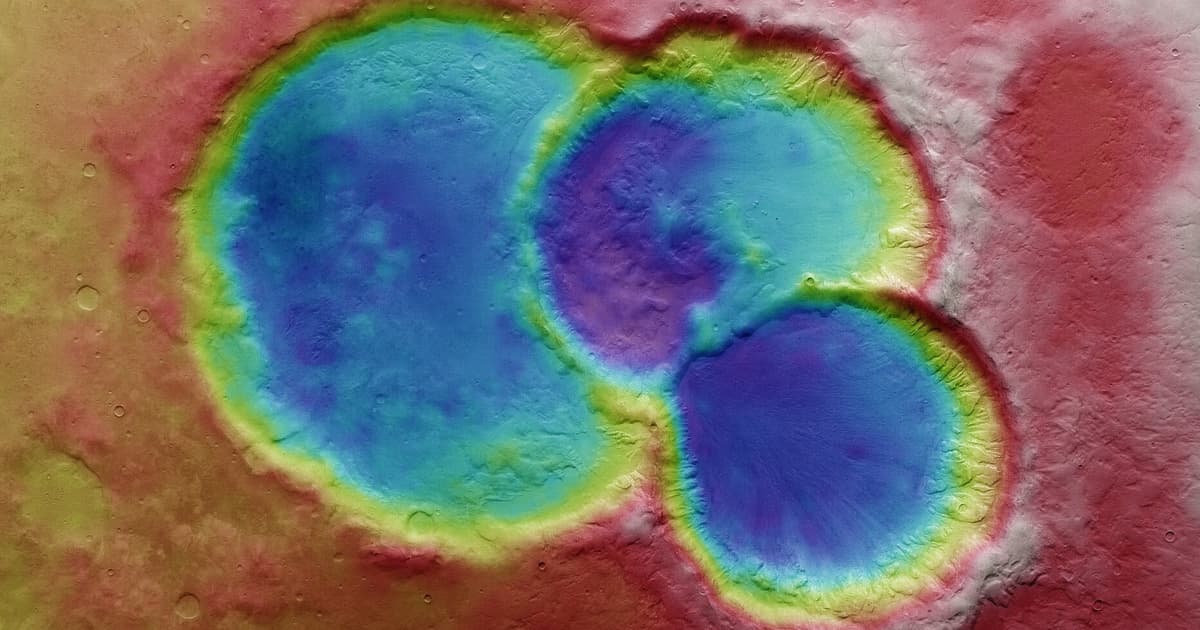 The European Space Agency's Mars Express orbiter just spotted something unusual on the surface of the Red Planet: three craters seemingly overlapping each other, kind of like two thirds of the Olympics logo.

The odd triplet was spotted near Mars' ancient southern hemisphere, in an area known as Noachis Terra. Scientists believe the area was bombarded by asteroids some four billion years ago, leaving it dotted with craters.

The fact that they're so old makes them particularly interesting to scientists, as studying them could reveal secrets about the history and evolution of the planet.

The triple crater is just east of the larger, well known Le Verrier crater, which in itself is about 87 miles across. The largest of the three rings in comparison is just 28 miles across.

Scientists suggest the triple crater may have been formed by an asteroid that split into three before crashing into the surface. Another, less likely explanation could be that three separate asteroids hit the surface at almost exactly the same spot.

If the asteroid did split before making contact, the implications are much bigger than you may think: the atmosphere of Mars four billion years ago would have to have been much more dense than it is now to be capable of breaking such an impactor up into pieces during its descent.

That means early Mars may have been war farmer and wetter than we thought, the ESA's statement suggests, which would be in line with recent research that indicates Mars was once flush with huge rivers.

The three craters' shallowness was likely caused by ice moving under the surface over millions of years, softening the soil and eventually smoothing out any deeper indentations.

Martian Duds
On Tomorrow's Launch, NASA Is Sending Spacesuit Chunks to Mars
7. 29. 20
Read More
Coarse and Rough
Astronomers Say "Megaripples" Are Moving Across the Surface of Mars
7. 24. 20
Read More
Venus Flyby
Scientists: Flying By Venus to Get to Mars Would Be Cheaper, Faster
7. 7. 20
Read More
+Social+Newsletter
TopicsAbout UsContact Us
Copyright ©, Camden Media Inc All Rights Reserved. See our User Agreement, Privacy Policy and Data Use Policy. The material on this site may not be reproduced, distributed, transmitted, cached or otherwise used, except with prior written permission of Futurism. Articles may contain affiliate links which enable us to share in the revenue of any purchases made.
Fonts by Typekit and Monotype.