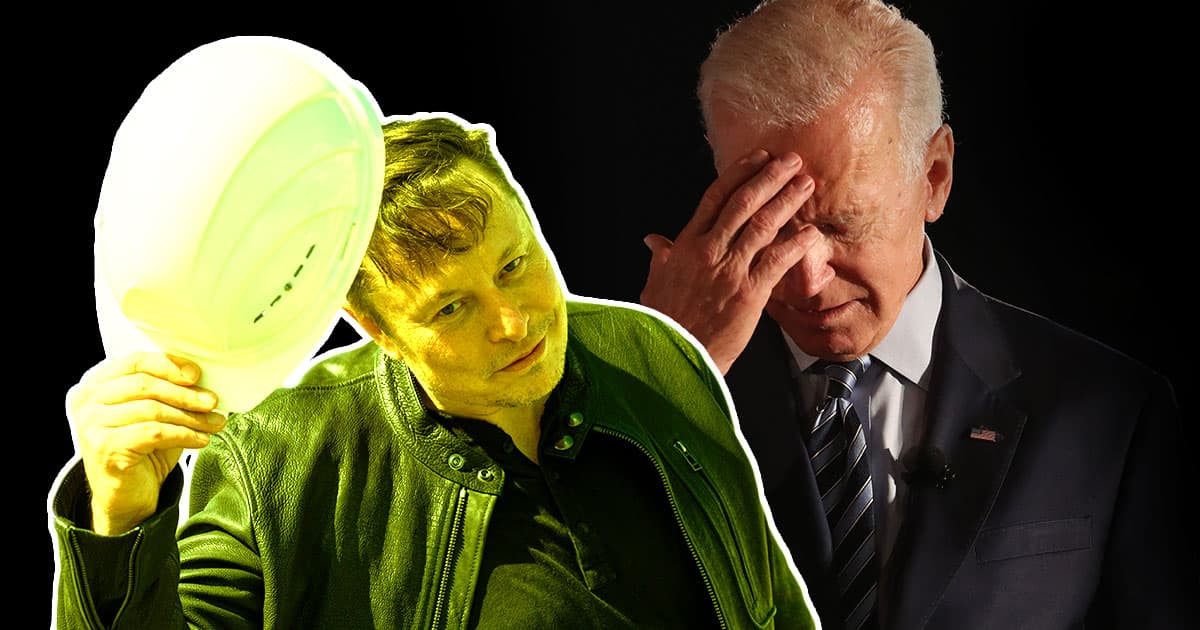 "They have nothing to worry about. I would do the right thing."

"They have nothing to worry about. I would do the right thing."

Do the Right Thing

Tesla CEO Elon Musk’s feud with *checks notes* President Joe Biden rages on — but he promises that he’d be on his best behavior if he’s ever invited to the White House.

The billionaire has taken issue with Biden allegedly "ignoring" his ventures Tesla and SpaceX in the past. However, Musk recently told CNBC that he’d be willing to put all that aside if he was ever invited to meet with Biden.

"They have nothing to worry about," Musk said in an email to the broadcaster. "I would do the right thing."

His comments came on the heels of reports that the White House has made no immediate plans to invite Musk to a future meeting with corporate leaders. Sources have told CNBC that White House advisors fear Musk might do something erratic — imagine such a thing! — that could embarrass the president.

However, Musk says that news of conflict between him and Biden are overblown… mostly.

"The notion of a feud is not quite right," Grimes’ baby daddy told the broadcaster. However, he went on to gripe that "Biden has pointedly ignored Tesla at every turn and falsely stated to the public that GM leads the electric car industry, when in fact Tesla produced over 300,000 electric vehicles last quarter and GM produced 26."

To Musk’s credit, Biden has seemed to strategically omit Tesla from comments about electric vehicle production in the past. A likely explanation is that the Musk-owned automaker has a history with fighting labor union attempts.

It also doesn’t help that Musk has publicly opposed White House spending measures such as the EV tax credit.

So we’ll see if Musk gets his White House invite — but if Tesla still insists on its anti-union stance, we wouldn’t bet on it.

READ MORE: Elon Musk accuses Biden of ignoring Tesla, but says he would ‘do the right thing’ if invited to White House [CNBC]

More on Musk feuds: Elon Musk, Who Constantly Posts About Stuff He Hates, Complains About the Media’s “Relentless Hatestream”