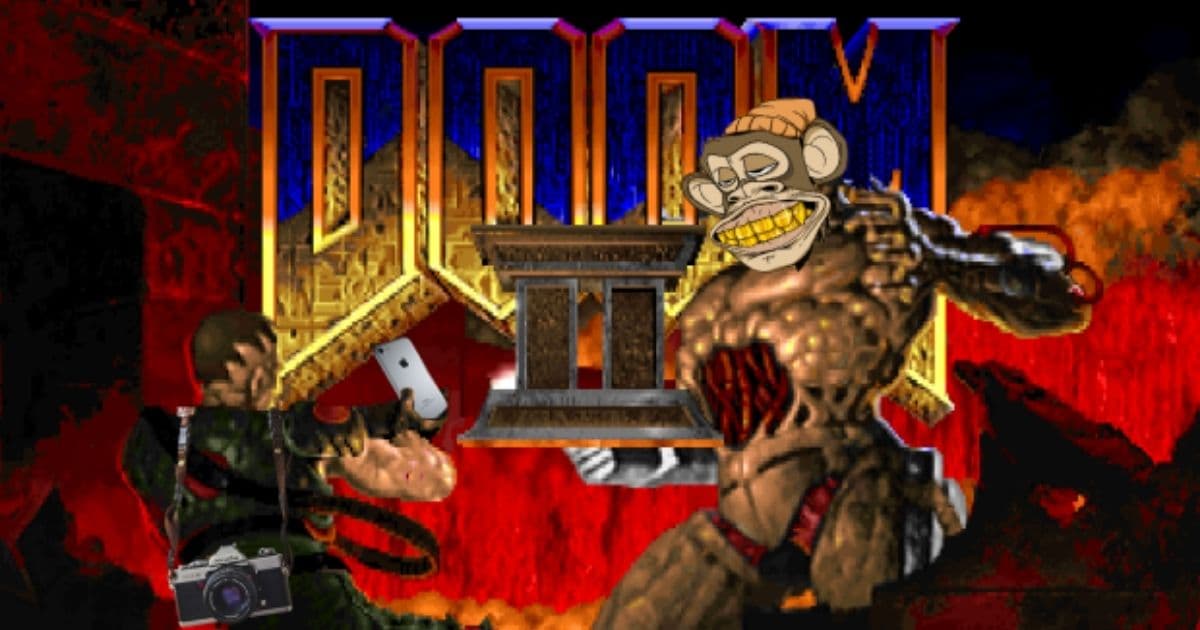 Someone Made a "Doom" Mod Where Instead of Shooting Demons, You Take Screenshots of NFTs

Just when you thought the NFT divide couldn't get stupider.

Just when you thought the NFT divide couldn't get stupider.

Someone who seems to really hate non-fungible tokens (NFTs) has made a modified version of the classic video game Doom where the whole premise involves "killing" NFTs via screenshot.

As PC Gamer reports, the biggest difference between regular Doom and NFT Doom is that, instead of shooting the hellish monsters that populate the original, players take screenshots of Bored Ape-esque primates and, in turn, rack up as much in-game money as possible.

For those blessed enough to not understand most of the aforementioned NFT-y terminology, here's a primer.

The game's villains are a take on NFTs, a blockchain technology that purports to let a person own a digital asset, like an image.

NFT Doom seems to be a particular dig at the Bored Ape Yacht Club, a collective in which users gain clout by spending what can amount to hundreds of thousand of dollars — or the crypto equivalent, at least — on pictures of near-identical computer-generated apes. They're then able to re-sell their apes for even-higher sums of money, which is how art that looks like extras in the back of a Gorillaz music video came to be overvalued at such preposterous levels.

Among NFT enthusiasts — and in particular Bored Ape purchasers — is the concept that right-click-saving or screenshotting an NFT, you're actually stealing it. It's pretty deranged, and they even have a name for it: the "right-clicker mentality," which has become parlance for people who, like the creator of NFT Doom, enjoy trolling NFT stans.

Released on December 15 by a game developer who goes by "Ultra Boi," this Doom mod begs the question: when will anti-NFT trolling go from being kind of funny, like this game, to absolutely cringe?

With the way things are accelerating in the wacky world of NFTs, our guess is that making fun of NFTs will be too stupid to be laughed at by 2022.

Gamer Word
Scientists Find That Gamers Are Indeed More Racist and Sexist Than Normies
10. 27. 22
Read More
Apes Ahoy
A Major NFT Project Is Falling Apart in a Storm of Lawsuits
3. 22. 22
Read More
Rube Goldbergian
The Dune NFT Project Is Back With an Inscrutable New Scheme
3. 9. 22
Read More
+Social+Newsletter
TopicsAbout UsContact Us
Copyright ©, Camden Media Inc All Rights Reserved. See our User Agreement, Privacy Policy and Data Use Policy. The material on this site may not be reproduced, distributed, transmitted, cached or otherwise used, except with prior written permission of Futurism. Articles may contain affiliate links which enable us to share in the revenue of any purchases made.
Fonts by Typekit and Monotype.