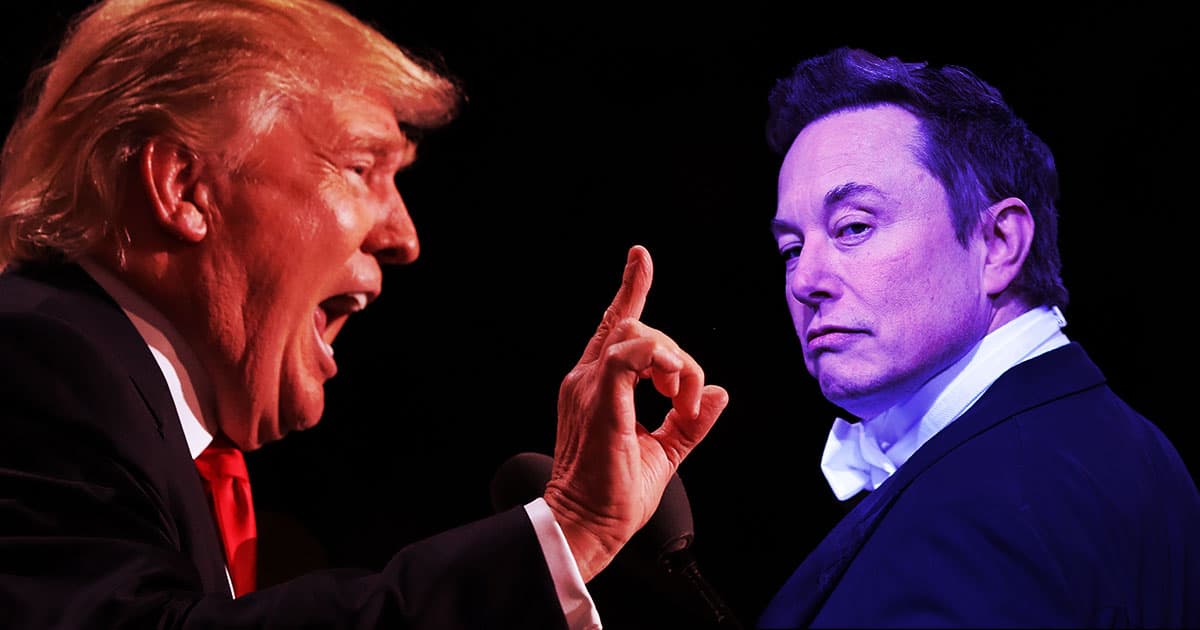 "I could have said, 'drop to your knees and beg,' and he would have done it."

"I could have said, 'drop to your knees and beg,' and he would have done it."

Noted reality TV personality Donald Trump is apparently quite angry with billionaire frenemy Elon Musk, and yesterday he decided to take to Truth Social — that's the app that the former President created after he was kicked off Twitter for trying to topple democracy — to let the good people know why.

In a series of rambling posts, the ex-Prez attacked the Tesla and SpaceX founder from just about every angle imaginable.

"When Elon Musk came to the White House asking me for help on all of his many subsidized projects, whether it's electric cars that don't drive long enough, driverless cars that crash, or rocketships to nowhere, without which subsidies he'd be worthless," read one post. "Telling me how he was a big Trump fan and Republican, I could have said, 'drop to your knees and beg,' and he would have done it."

This latest orange explosion comes just days after Trump called Musk a "b***s*** artist" at a Sarah Palin rally in Anchorage, Alaska, claiming that the wealthy innovator had lied about voting for him in 2016.

Oh, man, we're really going to do this. What happens the two most volatile social media accounts collide? pic.twitter.com/PK381Uab0H

Trump's Tuesday rant also came after Musk's botched Twitter deal, alleging that the social media site is "perhaps worthless" — although it's worth noting that Twitter is definitely not worthless, and the former President is likely still just salty about the platform giving him the boot back in 2021.

In response to Trump's weekend accusation of BS artistry, Musk calmly tweeted on Monday that he doesn't "hate the man," but does feel that "it's time for Trump to hang up his hat and sail into the sunset." Basically, he's saying it's best for the reality TV boss to finally retire.

As for yesterday's Truth Social tirade, the alleged builder of "rocketships to nowhere" didn't seem too fazed. Later that evening, he acknowledged the harangue with a brusque "lmaooo" — followed, in true Musk fashion, with a shouting Grampa Simpson meme.

From Azalea Banks to Taylor Swift, neither of these figures are new to bizarre feuds. And while the growing rivalry between two very powerful men is certainly worth paying attention to, let's not allow anyone's Truth Social screaming to distract us from the ongoing January 6 hearings.

READ MORE: Trump ramps up feud with Elon Musk, claiming he could have made Musk drop to his knees and beg for help when he was president [Business Insider]

More on recent Trumpings: Trump Admits That He Can't Mention the Covid Vaccine in Front of His Followers