"We did so much in terms of therapeutics and a word I'm not allowed to mention." 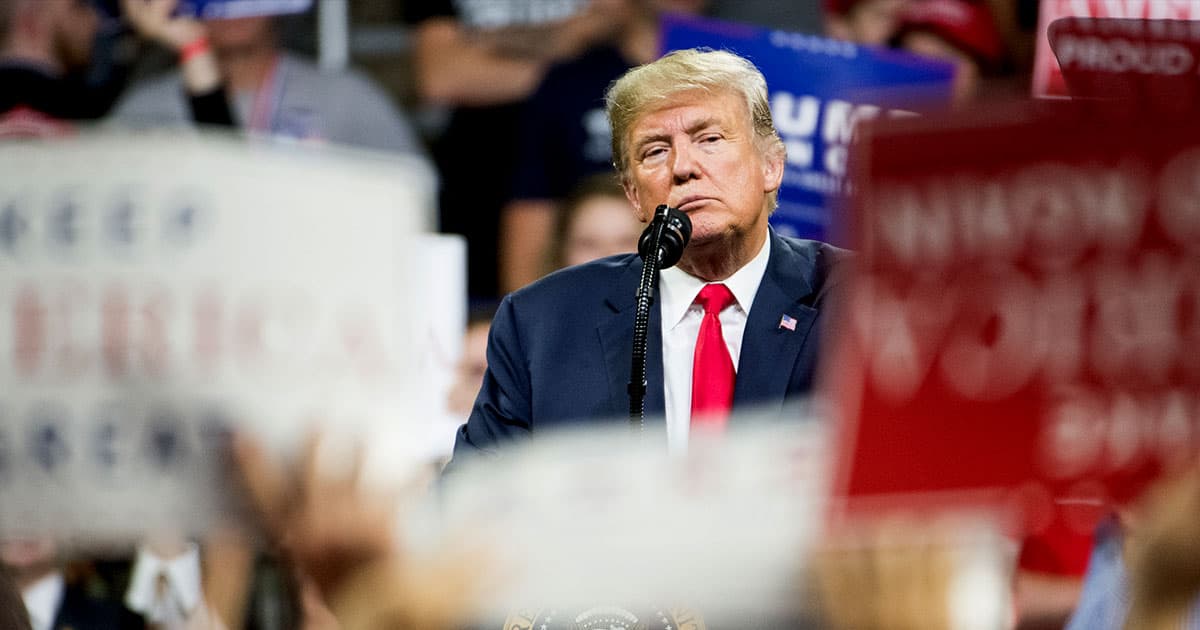 Ex-President and extremely sore loser Donald Trump had some words to say — or well, not say — about the COVID-19 vaccine.

At a Saturday rally in Anchorage, Alaska, the reality television star attempted to take credit for his role in coronavirus vaccine development — without actually saying "vaccine," due to his own admission that his many of his own supporters really, really aren't into the lifesaving innovation.

"We did so much in terms of therapeutics and a word I'm not allowed to mention. But I'm still proud of that word," said the former President. "We did that in nine months, when it was supposed to take 5 years to 12 years. But I'm not mentioning it in front of my people."

The rally in question was for anti-vax US house candidate Sarah Palin — remember her? — and US senate contender Kelly Tshibaka, both of whom have opposed efforts to encourage vaccination.

"We don’t have kings, but you would never know it from the amount of power Joe Biden assumes for himself," read an unironic  statement by Tshibaka, issued late last year in response to the Biden administration's failed attempt at a test-or-vaccine mandate for large employers. "This mandate is unconstitutional and un-American."

Trump seems to rarely be at odds with his base, though the vaccine has proven to be a contentious exception. While onstage last year in Dallas with disgraced Fox News host Bill O'Reilly, both figures were booed — and not because they were Donald Trump and Bill O'Reilly, but because they said that they'd each gotten booster shots.

Now, it looks like Trump wants to have his cake and eat it too — without being too specific about said cake, that is.

"So totally give me credit for that thing I did that I can't mention that you refuse to take and don't want mandated that other people take that you make fun of in airports and Cheesecake Factory restaurants," mused one saucy tweet, in response to Saturday's comments. "Did I miss anything?"

And like... sure. Yes. It's true that Trump was president when the vaccine was invented, and his funding for Operation Warp Speed may well have produced a vaccine sooner than was otherwise expected and helped distribute it effectively.

At the same time, the Trump administration also did things like, say, actively suppress the CDC's coronavirus testing efforts, spread bizarre misinformation, and contribute to the COVID-related rise of anti-AAPI hate, vitriol, and violence — hatred that, in some cases, was deadly.

But in light of Trump's support for the vaccine's development, his supporters' distrust of the vaccine is a grim irony.

Still, the president seems to think he did a real bang-up job with the pandemic response — and that one day, the anti-vaxxers will see the light.

"Someday, [my anti-vax supporters and I] are going to have to all sit-down and have a little talk," he continued at the Anchorage event. "But you know what? We did a hell of a job."

More on hurt Trump feelings: Donald Trump Is Absolutely Furious That Elon Musk Lied to Him

10.24.22 Developments
Pfizer's Jacking Up the COVID Vaccine Cost to 10,000 Percent Its Production Cost
9.20.22 Developments
Biden Really Screwed Up When He Said the "Pandemic Is Over"
8.12.22 Developments
The CDC's New COVID Guidelines Are Pretty Stupid Even by American Standards
7.02.22 Rx/Medicines
North Korea Claims It Only Got COVID Because South Korea Sent Over "Tainted Balloons"
5.19.22 Rx/Medicines
Doctors Impressed by Drugs That Rejuvenate Immune System