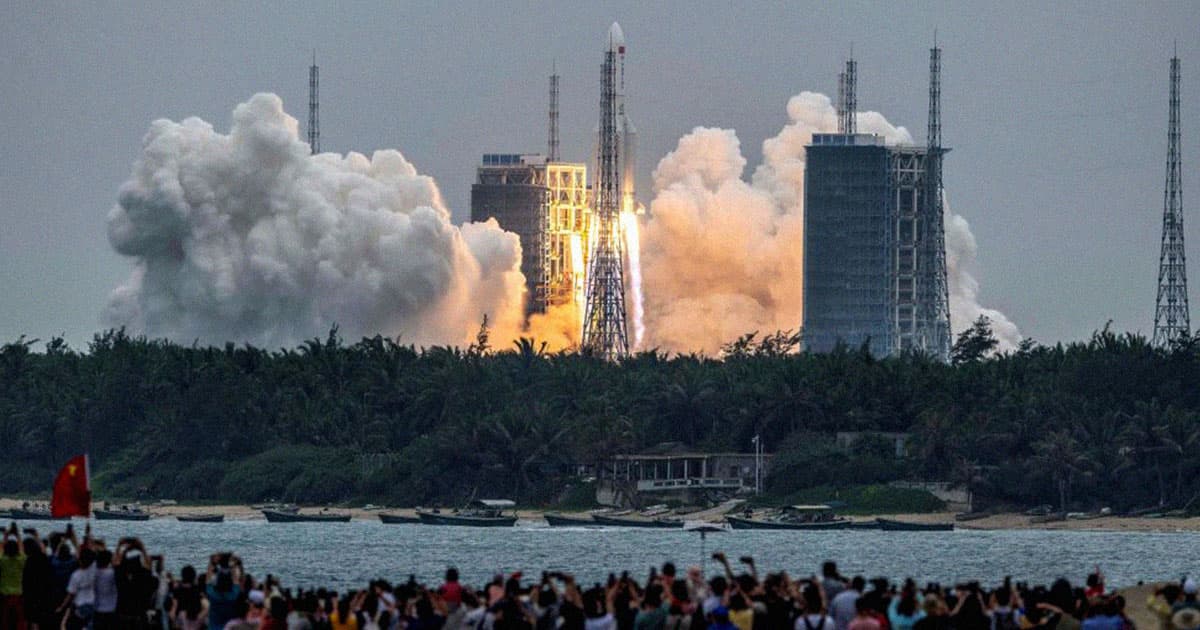 China Is Sending More Space Junk Hurtling Down to Earth

Heads up, literally. This weekend, China plans to launch a powerful Long March 5B rocket called the Wentian from the Wenchang Space Launch Site in Hainan — and taking into account the history of the country's Long March 5B spacecraft, it's pretty likely parts of the rocket will crash land back onto Earth.

As Gizmodo reports, the 174-foot-tall rocket launching this Sunday from Hainan is the third of its kind, all of which have thus far made chaotic, haphazard re-entries that resulted in unpredictable crashes around the world.

Following a launch back in 2020, uncontrollable Long March 5B debris crashed into Africa's west coast, thankfully hurting no one but damaging some structures. Then, just last spring, the Chinese government confirmed that debris from the same model had hurtled into the Indian Ocean after widespread speculation about where it would land.

NASA condemned the 2021 crash at the time, with agency chief Bill Nelson declaring in a statement that it was "clear that China is failing to meet responsible standards regarding their space debris."

As Gizmodo points out, space agencies are lucky that no people have been hurt so far by showering chunks of space junk. Yet according to a study published in Nature Astronomy, the next decade presents a 10 percent risk that the debris will indeed cause human casualties — and that doesn't even take animal and environmental impact into consideration.

China is in the process of constructing its Tiangong space station — that is, the nation's answer to the US- and Russia-managed ISS. The Long March 5B rockets are being used to help build the orbital outpost, and it's probably safe to say that the nation will continue to launch them until Tiangong is complete.

Unfortunately, experts think that this weekend's launch is cause for concern. When Gizmodo asked Jonathan McDowell, an astrophysicist at the Harvard-Smithsonian Center for Astrophysics, if another crash is likely after Sunday's takeoff, the scientist was less than optimistic.

"I would say it is almost certain," said McDowell. "I will be very pleasantly surprised if they have changed the core stage design. I expect they have not and we are up for another ride like the last time."

READ MORE: Another Chinese Rocket Could Be Headed for a Dangerous Uncontrolled Reentry [Gizmodo]

Duck and Roll
Russia Forced to Dodge Space Debris From When It Blew Up Satellite
Jun 17
Read More
Sanctions Chess
Russia Says It'll Buy Space Parts From China, But China Says Uhhh Not So Fast
Mar 1
Read More
Sleek and Shiny
China's New Space Station Looks Like an Apple Store Inside
10. 18. 21
Read More
+Social+Newsletter
TopicsAbout UsContact Us
Copyright ©, Camden Media Inc All Rights Reserved. See our User Agreement, Privacy Policy and Data Use Policy. The material on this site may not be reproduced, distributed, transmitted, cached or otherwise used, except with prior written permission of Futurism. Fonts by Typekit and Monotype.