If you look up, you may see a Chinese spacecraft burning up in the atmosphere. 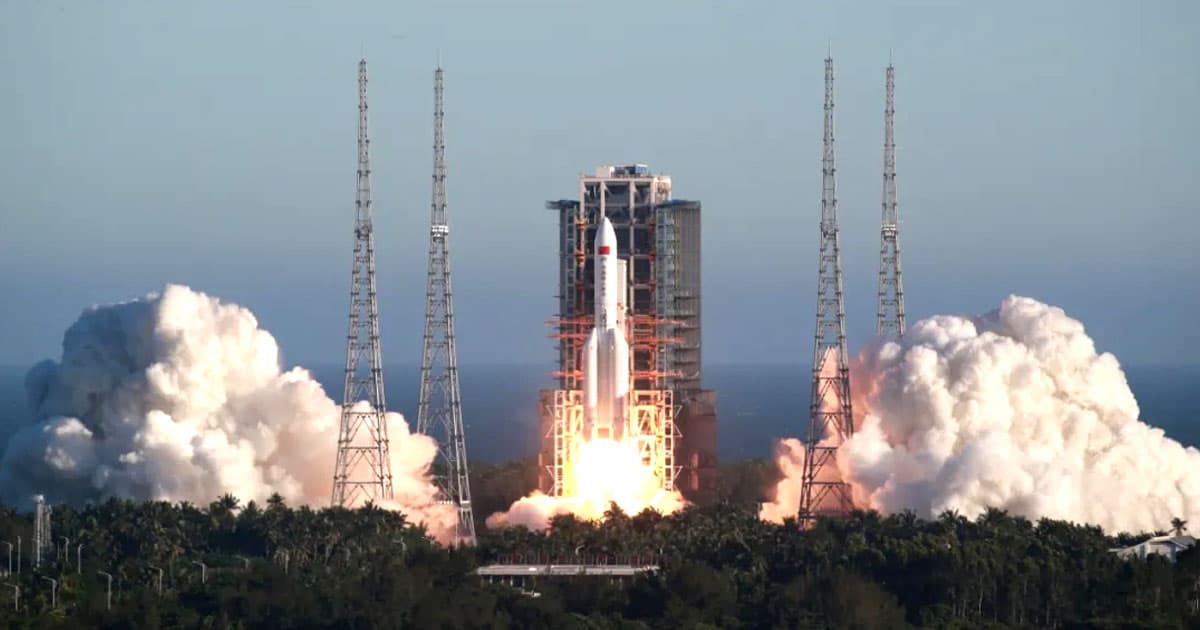 After about a week in Earth's orbit, the core stage of China's gigantic Long March 5B rocket is now plummeting towards our planet's surface.

"It is the most massive object to make an uncontrolled reentry since the 39-tonne Salyut-7 [spacecraft] in 1991," Jonathan McDowell, astronomer at the Harvard-Smithsonian Center for Astrophysics, wrote in a tweet last week. Today, he added that the space debris is now "low enough now that reentry heating may make it visible" from the ground.

Luckily, the experimental spacecraft itself — in contrast to its core stage — made it back down intact after spending three days in orbit.

US officials are tracking the object now and trying to pinpoint the exact moment when it makes touchdown.

Rockets usually tend to break up into smaller pieces as they fall. Some can carry themselves to safer reentry locations such as the Pacific Ocean, according to Forbes, but that doesn't seem to apply to China's Long March rocket.

Most pieces of debris will likely burn up in Earth's atmosphere and not make it onto the ground.

A previous instance of a massive object making its way back to Earth was China's Tiangong-1 space station. Its orbit slowly decayed before breaking up and splashing down in the South Pacific Ocean in April 2018.

Despite the station's debris potentially covering an area of thousands of kilometers, the chances of being hit by a piece of debris was "actually 10 million times smaller than the yearly chance of being hit by lightning," according to the European Space Agency.

Update: The rocket eventually splashed down — and reportedly dropped pieces over parts of Africa.

READ MORE: A Chinese Rocket Is Out Of Control And Falling Towards Earth Right Now [Forbes]

Read This Next
Monkey Business
China Plans to Send Monkeys to Space Station to Have Sex With Each Other
Overview Effect
William Shatner Says His Space Trip Left Him With a Feeling of Terrible Grief
Astronaut Drip
We Just Got the First Peek at NASA's Artemis Moon Landing Suits
Blast Off
Former Astronaut Details Quest to Grow Cannabinoids in Space
RIP
Unfortunate Comet Flies Too Close to the Sun, Disintegrates and Becomes a Ghost
More on Off World
Appetite for Dest...
Yesterday on the byte
Black Hole In "Hyper-Feeding Frenzy" Chews Through Stars and Shoots Its Leftovers Towards Earth
Lunar RGB
Wednesday on the byte
NASA Shows Off Artemis "Party Mode," Powered by Amazon (TM) Alexa (TM)
Putting Things In...
Tuesday on futurism
Amazing Artemis Photo Shows Every Human, Alive or Dead, Plus the Moon
READ MORE STORIES ABOUT / Off World
Keep up.
Subscribe to our daily newsletter to keep in touch with the subjects shaping our future.
+Social+Newsletter
TopicsAbout UsContact Us
Copyright ©, Camden Media Inc All Rights Reserved. See our User Agreement, Privacy Policy and Data Use Policy. The material on this site may not be reproduced, distributed, transmitted, cached or otherwise used, except with prior written permission of Futurism. Articles may contain affiliate links which enable us to share in the revenue of any purchases made.
Fonts by Typekit and Monotype.