It screamed over several major US cities before splashing down in the Atlantic. 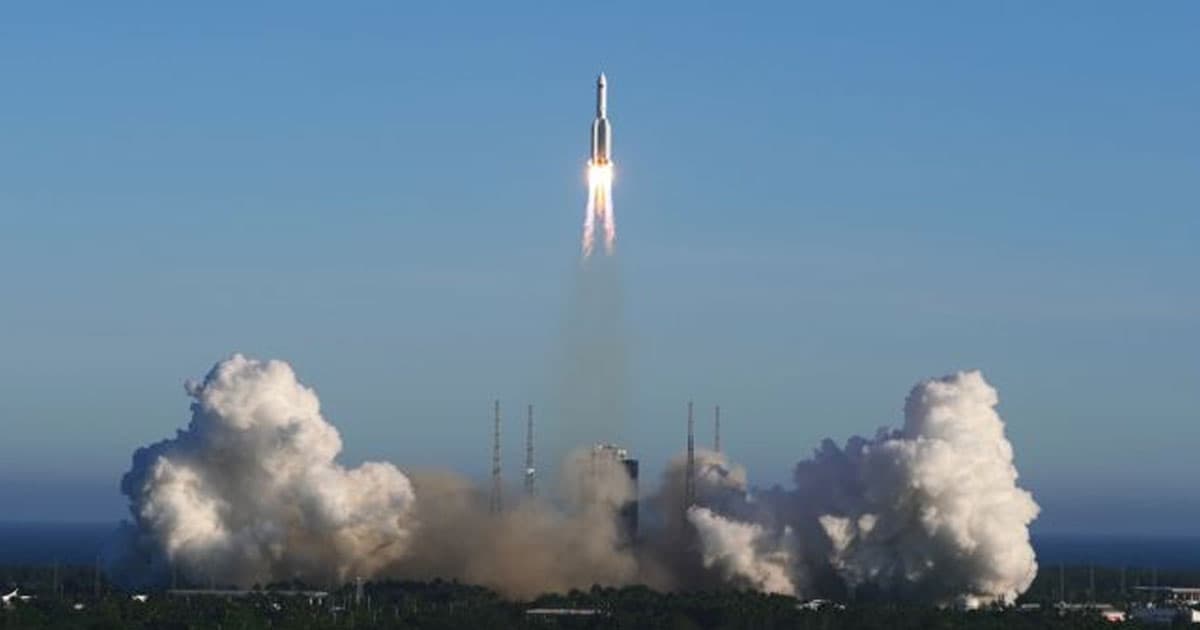 Parts of China's gigantic Long March 5B rocket finally made their uncontrolled descent back to Earth on Monday, CNN reports. Pieces of debris soared over the continental United States before splashing into the Atlantic Monday afternoon, as confirmed by the US Air Force.

"For a large object like this, dense pieces like parts of the rocket engines could survive reentry and crash to Earth," Harvard-Smithsonian astronomer Jonathan McDowell told CNN. "Once they reach the lower atmosphere they are traveling relatively slowly, so worst case is they could take out a house."

The rocket had originally sent an experimental spacecraft into Earth's orbit earlier this month — but the empty core of the rocket started hurtling back through the Earth's atmosphere as it made its way down, without any technology to alter its course.

When it hit the water, it was likely quite the belly flop.

"At 17.8 tons, it is the most massive object to make an uncontrolled reentry since the 39-tonne Salyut-7 [spacecraft] in 1991," McDowell wrote in a tweet last week.

Only larger pieces of the Skylab in 1979 and the Columbia space shuttle in 2003 made more massive uncontrolled descents back down to Earth.

Pieces of debris careening through Earth's atmosphere are difficult to track. As of Monday morning, "potential reentry areas" still included parts of Australia, US, and Africa according to McDowell.

"The Air Force's final prediction was plus or minus half an hour, during which time it went 3/4 of the way around the world. It's pretty hard to do any better," McDowell told CNN.

Update: As it fell, the rocket reportedly dropped pieces over parts of Africa.

READ MORE: One of the largest uncontrolled pieces of space debris fell down to Earth today [CNN]

More on the rocket: A Massive Chinese Rocket Is Plummeting Out of the Sky Right Now

Read This Next
And He Scores
We Are Completely Puzzled by This Video of a Chinese Astronaut Playing Ping-Pong in Space
Moon Wrestling
The Head of NASA Is Scared Chinese Astronauts Will Seize Portions of the Moon
Monkey Business
China Plans to Send Monkeys to Space Station to Have Sex With Each Other
Sanctions Chess
Russia Says It'll Buy Space Parts From China, But China Says Uhhh Not So Fast
Sleek and Shiny
China's New Space Station Looks Like an Apple Store Inside
More on Off World
Light Me Up
6:09 PM on the byte
Wall of Lasers Cuts Across Hawaii's Night Sky
Water Sign
3:35 PM on the byte
Scientists Find New Evidence of Hidden Ocean World in Our Solar System
Trashing Orbit
Yesterday on the byte
Elon Musk Says SpaceX May Build Starship That Dies on Purpose
READ MORE STORIES ABOUT / Off World
Keep up.
Subscribe to our daily newsletter to keep in touch with the subjects shaping our future.
+Social+Newsletter
TopicsAbout UsContact Us
Copyright ©, Camden Media Inc All Rights Reserved. See our User Agreement, Privacy Policy and Data Use Policy. The material on this site may not be reproduced, distributed, transmitted, cached or otherwise used, except with prior written permission of Futurism. Articles may contain affiliate links which enable us to share in the revenue of any purchases made.
Fonts by Typekit and Monotype.