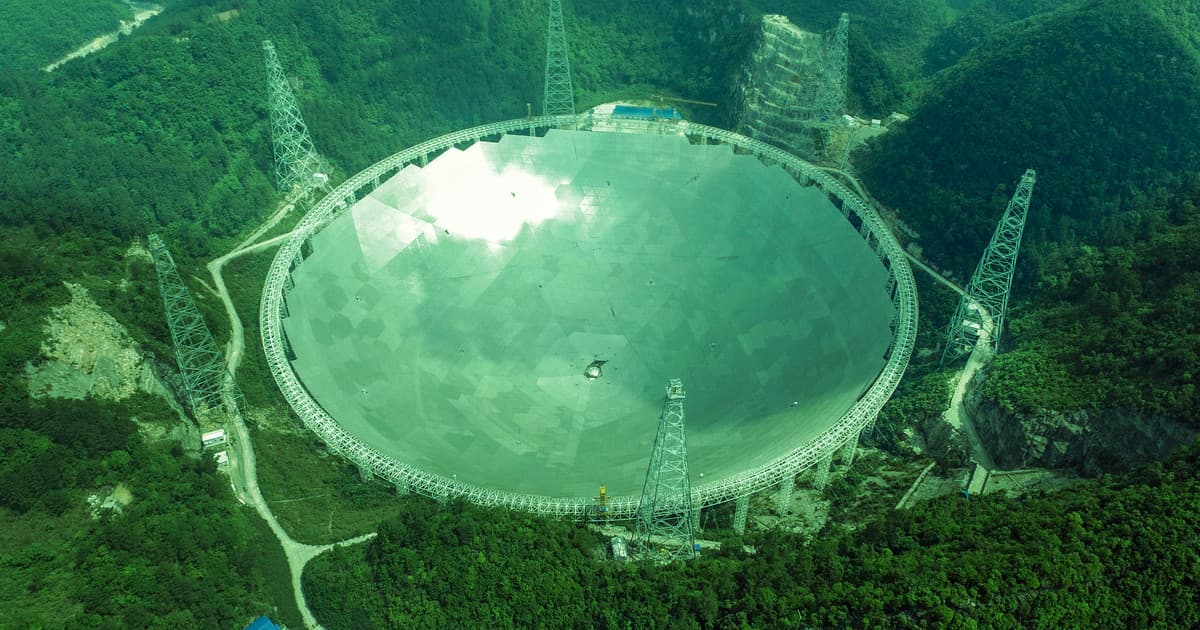 On Saturday, China officially debuted the gigantic, alien-hunting radio telescope that it's been testing and debugging ever since construction completed in 2016.

The Five-hundred-meter Aperture Spherical radio Telescope (FAST) sets a new world record for the largest single-dish radio telescope with a diameter of half a kilometer, according to state-run news agency Xinhua. Now that the telescope is fully operational and open to research scientists from around the world, astronomers will be able to probe more corners of the universe than ever before — and potentially uncover signs of extraterrestrial life.

Chinese authorities were expected to give the final green light to the FAST team in October after the telescope completed a round of tests this past September, according to Nature News. But even though it wasn't fully operational, FAST — known informally as "Sky Eye" — was still conducting important research.

During multiple rounds of tests, FAST scientists discovered 102 new pulsars, Xinhua reports. That's more than the total number discovered in the same time period by researchers in the U.S. and Europe combined.

The completed FAST is about 2.5 times as sensitive as any other radio telescope on the planet, and is expected to have four times the range of the next largest dish, per Xinhua.

That means, potentially, that astronomers using FAST will be able to uncover new pulsars or other celestial bodies in previously-inaccessible expanses of the universe.

Hubble Tension
Most Precise Measurements of the Universe Suggest That Something Is Very Wrong
10. 20. 22
Read More
Whack-an-Alien
Chinese Scientists Say They May Have Detected Signal From Extraterrestrial Intelligence, But Probably Not
6. 14. 22
Read More
Space Lumps
Scientists Say We May Be Extremely Wrong About the Universe
4. 28. 22
Read More
+Social+Newsletter
TopicsAbout UsContact Us
Copyright ©, Camden Media Inc All Rights Reserved. See our User Agreement, Privacy Policy and Data Use Policy. The material on this site may not be reproduced, distributed, transmitted, cached or otherwise used, except with prior written permission of Futurism. Articles may contain affiliate links which enable us to share in the revenue of any purchases made.
Fonts by Typekit and Monotype.