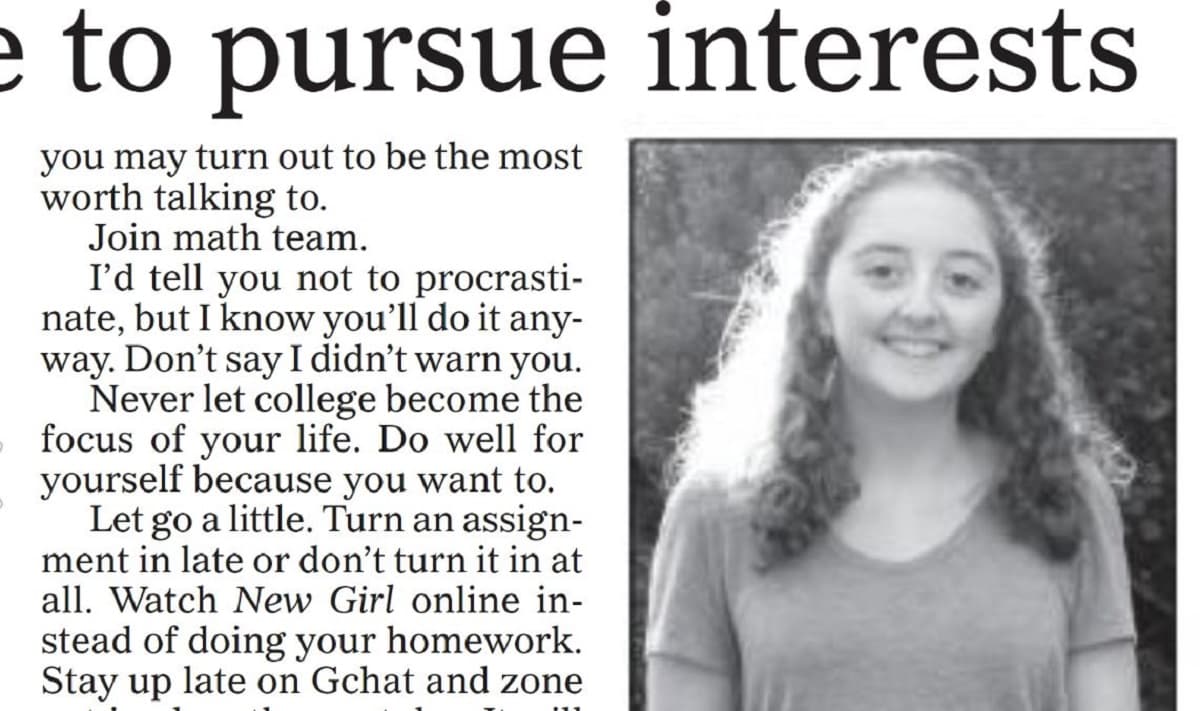 A former high school classmate of former Alameda Research CEO Caroline Ellison tweeted that they were flipping through back issues of their high school newspaper, The Newtonite, when they found a column by the alleged FTX polycule member herself.

Fascinatingly, the column appears to be legit. It was printed in 2012, in Newton North High School's graduation special, and bears both the byline and an old photo of Ellison.

In the editorial, the former CEO listed her life lessons gleaned throughout her high school career as pieces of advice to her "freshman self."

Among the more salient words of wisdom was her insistence that teens should read a bunch of different subjects to "feel more interesting," that they should "work on talking to people" because it will "get easier with practice," and, perhaps most tellingly, that they should "let go a little" and have some fun, even if it's to the detriment of their studies.

"It will never be the end of the world," as Ellison summed it up.

If rumors about Ellison's alleged role in the alternative lifestyle surrounding FTX and its ex-CEO Sam Bankman-Fried's Bahamas compound can be believed, the onetime crypto scion was indeed open to new experiences. Indeed, on a blog that almost certainly belonged to Ellison, she wrote about how, to her mind, "the only acceptable style of poly[amory] is best characterized as something like 'imperial Chinese harem.'"

The same mischievous tone evidenced in her high school paper column is also found throughout the blog that likely belonged to Ellison, in which she, at one point, joked about putting wire fraud in her dating app profiles. After all, she and Bankman-Fried, her reportedly on-off boyfriend, also reportedly had a secret group chat that they called "wire fraud," too.

We can't say one way or the other what advice Ellison would give herself if she could go back in time, but we have a feeling that she might amend her "it will never be the end of the world" quip to include not being a part of a huge crypto collapse.

One line definitely holds up, though: when she assured high schoolers that eventually — perhaps after market-rocking financial scandal — the travails of their youth "won't seem like so much of a problem anymore."

More on FTX: In High School, SBF Reportedly Printed $100 Bills With His Face on Them Called "Bankmans"