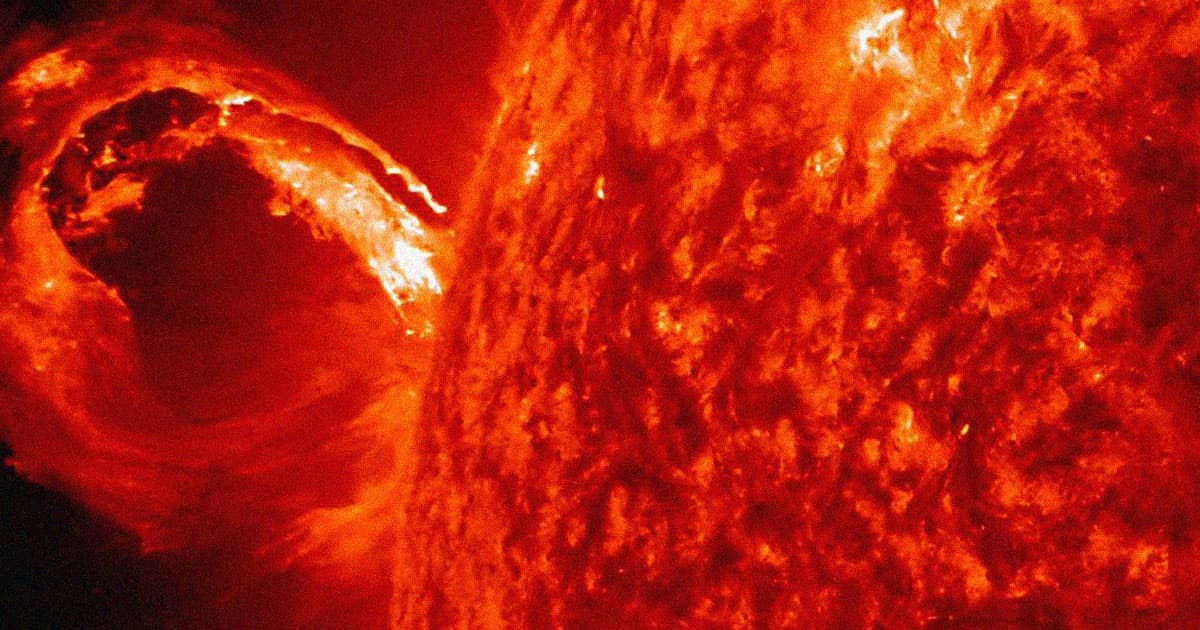 A Huge "Canyon of Fire" Just Opened Up on the Sun

Hot gases swirling on the surface of the Sun are caught in an endless dance of roiling plasma that occasionally escapes our star's atmosphere and gets slingshotted out into the solar system, with some of it even wreaking havoc with the Earth's magnetic field.

A filament of that plasma escaped the Sun over the weekend, leaving behind what Space Weather is referring to as a "canyon of fire," a deep ridge over 12,000 miles deep and ten times as long — which, for those keeping score, is more than 13,000 times deeper than the Earth's Grand Canyon.

The canyon itself may soon blast fragments of radiation in the form of coronal mass ejections (CMEs) toward the Earth, according to Space Weather, a reminder of the ferociousness of the celestial object that gave birth to our system's planets billions of years ago.

Once this radiation hits our atmosphere, it could lead to a geomagnetic storm, a major disturbance in our planet's magnetosphere.

While such an event sounds violent on paper, these storms are only likely to affect orbital systems like GPS and communications satellites, which can experience extra drag and potential errors in their radio signals during these events.

The storms can also lead to geomagnetic induced currents that can potentially lead to irreversible damage to power grids back on the surface.

But one of the most common side effects of these CMEs hitting the Earth's surface is something far more benign: stunning auroras, lighting up the night sky in beautiful colors.

For now, scientists await the onslaught of radiation caused by the latest CME — and, according to Space Weather, some of them are ready to hop on a plane and watch the spectacular show from above.

Jupiter Ascending
A Wave of Incredible Heat Ripped Through Jupiter
10. 14. 22
Read More
Star War
Scientists Are Trying to Figure Out How to Kill Stars with Black Holes
11. 29. 21
Read More
Satan's Butthole
The Sharpest-Ever Image of a Sunspot Looks Like a Portal to Hell
12. 4. 20
Read More
+Social+Newsletter
TopicsAbout UsContact Us
Copyright ©, Camden Media Inc All Rights Reserved. See our User Agreement, Privacy Policy and Data Use Policy. The material on this site may not be reproduced, distributed, transmitted, cached or otherwise used, except with prior written permission of Futurism. Articles may contain affiliate links which enable us to share in the revenue of any purchases made.
Fonts by Typekit and Monotype.