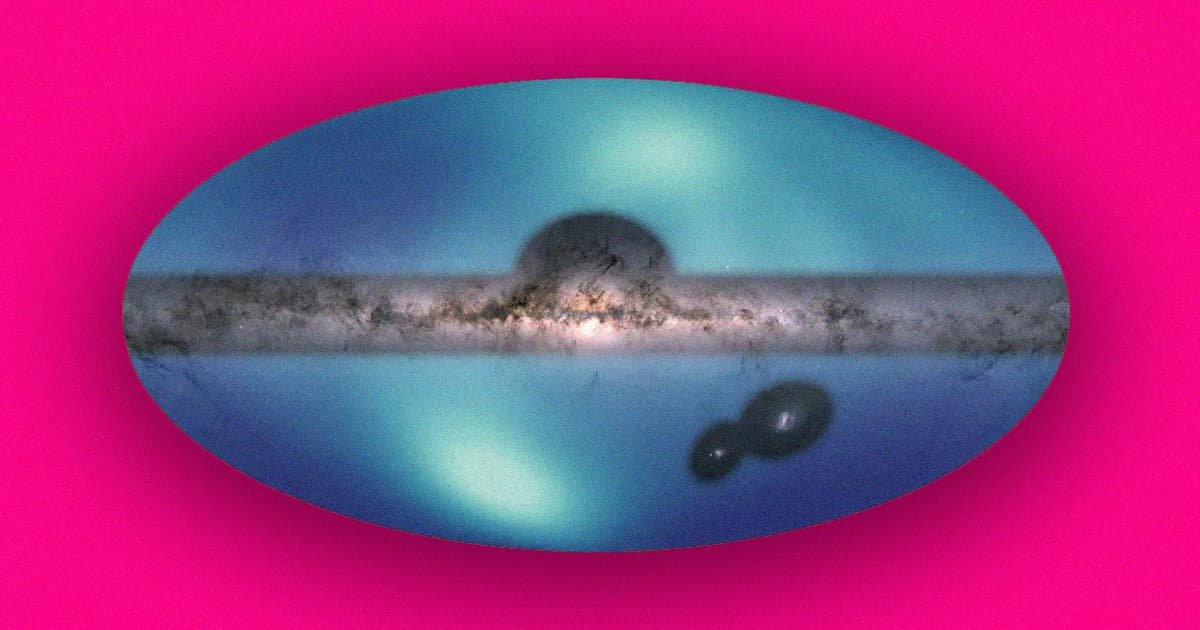 Along for the Ride

Stars trailing through intergalactic space are likely stuck in a blob of dark matter.

Stars trailing through intergalactic space are likely stuck in a blob of dark matter.

Scientists have looked seemingly everywhere in space for dark matter, which is the elusive, invisible substance thought to make up most of the stuff in the universe.

Now, a team of astrophysicists is looking outward, beyond our own galaxy, where they think a blob of dark matter might be hiding in plain sight, according to Live Science. Trailing behind the Large Magellanic Cloud, a dwarf galaxy that's on a crash course with the Milky Way, is a handful of stars caught up in what seems to be a cosmic slipstream, according to research published in the journal Nature. But the stars, which seem suspended in space, may actually be trapped in a big blob of dark matter that's dragging them along for the ride.

"We think this wake is made up of dark matter, and it drags stars along with it, which is how we can detect it," study coauthor and University of Arizona researcher Nicolás Garavito-Camargo said in a press release.

As with how gigantic masses of dark matter are believed to help hold entire galaxies together, the astrophysicists behind the new paper believe that the stars are stuck in place within the invisible blob. By studying how the stars move, Live Science reports, they may be able to finally empirically observe and study dark matter itself.

"You can imagine that the wake behind a boat will be different if the boat is sailing through water or through honey," lead author and Harvard University astronomer Charlie Conroy said in the release. "In this case, the properties of the wake are determined by which dark matter theory we apply."

If the team is right, their work could become a huge gift to the astrophysics community at large, which has sometimes seemed like it was grasping at straws to try and explain, identify, and study dark matter. If certain models or hypotheses for how dark matter behaves conflict with the direct, observational data that they collect from this slipstream, then other researchers would be able to refine and update their own models while eliminating those that don’t hold up.

More on dark matter: Dark Matter May Be Hiding Inside Planets, Scientists Say