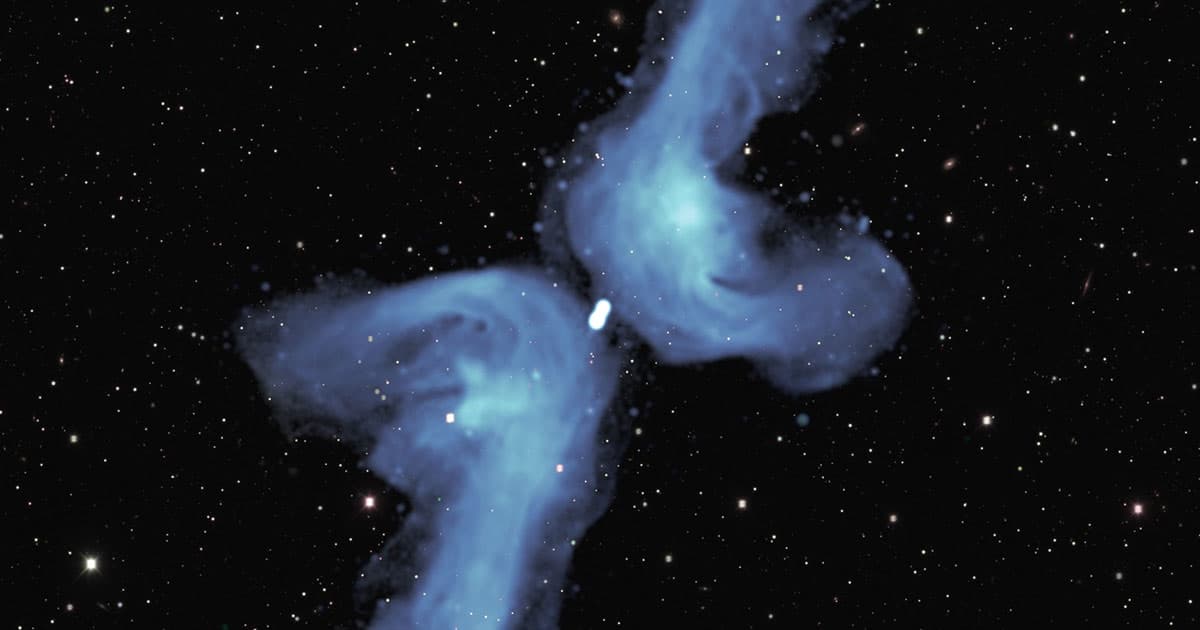 X Gonna Give It to Ya

These radio wave jets can extend millions of light-years into space.

These radio wave jets can extend millions of light-years into space.

A team of astronomers at the South African Radio Astronomy Observatory (SARO) claim they've solved the mystery behind why some galaxies shoot four jets of radio waves outwards, forming an "X" shape in the sky.

Many galaxies only shoot out two jets of radio waves. Some active galaxies, however, have four — a strange phenomenon astronomers have tried to explain for years.

They found that material tends to flow towards the center of the galaxy and "turn the corner" due to "pressure of tenuous intergalactic gas," according to a statement, flowing down the second arm of the two respective twin jets of radio waves — strong evidence that the strange galaxies could be the result of two black holes deflecting material in different directions, forming the "X."

The discovery was thanks to MeerKAT's incredible resolution. Astronomers used computers to combine data from its 64 antennas into the equivalent of an eight-kilometer-wide dish.

"It’s wonderful to see how its unique capabilities are contributing to resolving longstanding questions related to the evolution of galaxies," noted Bernie Fanaroff, former director of project that built MeerKAT, and a co-author of the study, in a statement.

More on galaxy mysteries: PHYSICIST: OUR GALAXY MAY BE LOCATED INSIDE AN ENORMOUS BUBBLE

Really Really Really Old
Astronomers Puzzled By Ancient Milky Way-Like Galaxy 12 Billion Light-Years Away
8. 13. 20
Read More
Crowded Galaxy
New Research: There Could Be 36 Alien Civilizations in Our Galaxy
6. 15. 20
Read More
Wanna Feel Small in the Universe?
Astronomers: Something Is Warping Our Entire Galaxy
3. 3. 20
Read More
+Social+Newsletter
TopicsAbout UsContact Us
Copyright ©, Camden Media Inc All Rights Reserved. See our User Agreement, Privacy Policy and Data Use Policy. The material on this site may not be reproduced, distributed, transmitted, cached or otherwise used, except with prior written permission of Futurism. Articles may contain affiliate links which enable us to share in the revenue of any purchases made.
Fonts by Typekit and Monotype.